Women of Faith: A Conversation with Mary Beth Fraser Connolly 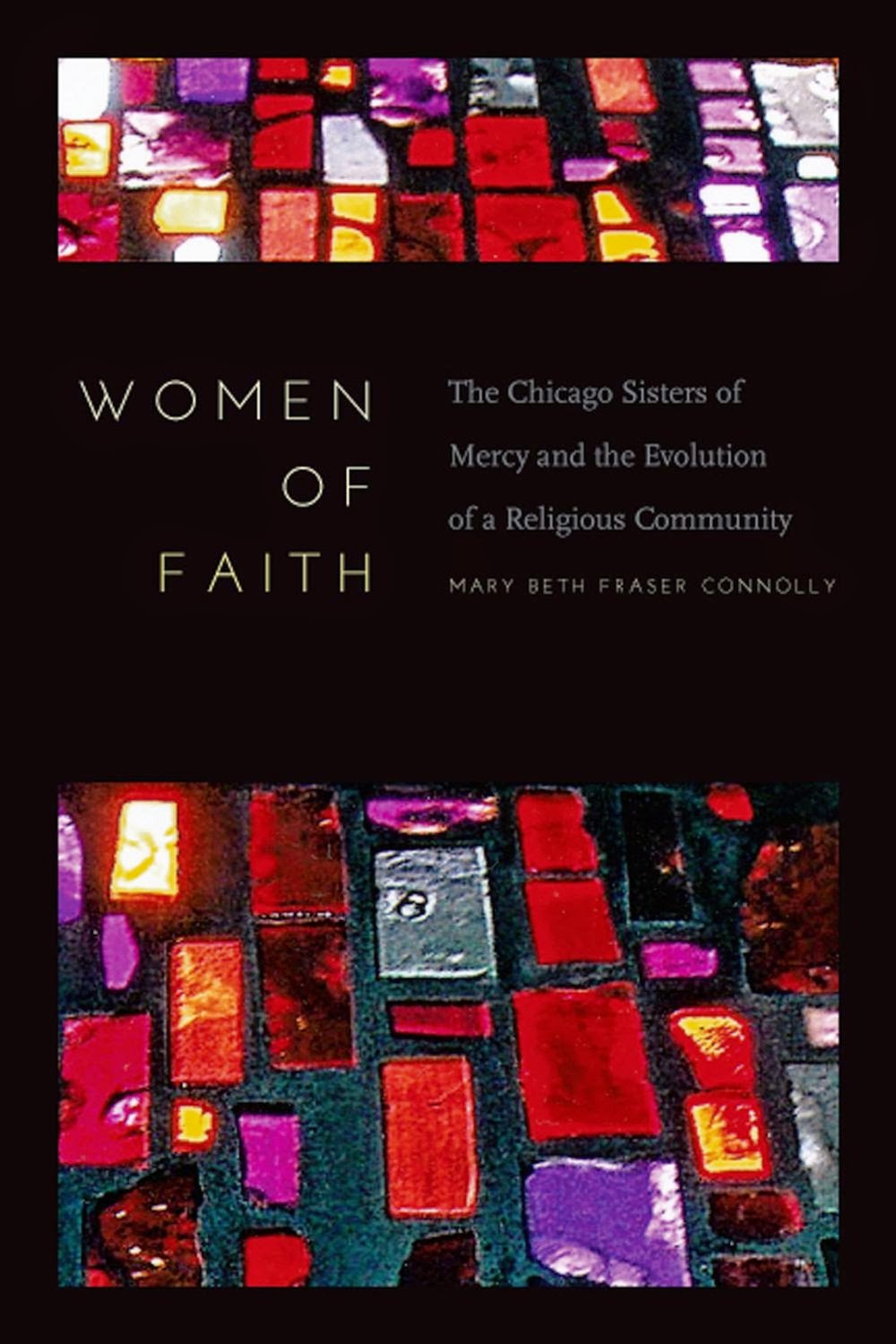 Last semester, I taught a course on the history of women in Chicago -- a fitting coda to my graduate school years, as it turned out, and a way to explore a less familiar historiography, given my research on New York Catholics. So you can imagine my delight when Mary Beth Fraser Connolly, familiar to many of us as the Assistant Program Director of the Lilly Fellows Program at Valparaiso University, announced the publication of her new book, Women of Faith: The Chicago Sisters of Mercy and the Evolution of a Religious Community (Fordham, 2014).

Mary Beth's been busy -- she also co-edited the essay collection Empowering the People of God: Catholic Action Before and After Vatican II (Fordham, 2013) and blogs at One Solid Comfort -- but she made time this summer for a chat about the pleasures and perils of writing institutional history, and the need for nuanced stories of Catholic women religious.


MM: How do you describe Women of Faith to potential readers?

MBFC: Women of Faith was meant to be a book that appealed to insiders -- those with a vested interest in the history of women religious, Mercys, and potentially other religious communities -- and also outsiders, those within the academy and without. The book looks at three periods of the Sisters of Mercy Chicago Regional Community’s history, from its early foundation to 2008. It revolves around three themes: ministry, spirituality, and community life.

MM: What challenges did writing an institutional history present? Especially one with such a large scope: 1846-2008, with women traveling and working across many parts of the Midwest?

MBFC: The biggest challenge writing institutional history and community history is that one can lose the individuals. I quickly came to see that this was a fear of the Sisters of Mercy on the book's editorial committee -- they didn’t want another history of buildings. They have that already. The Mercys were more than their buildings and they are more than one definition of “community.”

It is a long history and tying region into the story made it more complex. But, it was imperative that I include Iowa and Wisconsin in this study. Their name is misleading -- the "Chicago Mercys." It means Chicago Southside and Westside, Aurora, Ottawa, Davenport, Iowa City, Janesville, Milwaukee, and small towns in between. It also means that while most of the sisters in Chicago are White Sox fans, there are some who follow the Cubs. These differences are important.  Because I was mindful that some of the current community may originate in Wisconsin or Iowa, the history couldn’t just be about Chicago. It would be an inaccurate history if that is all I discussed.

Catholic history of this nature has tended also to ignore theory [but] we need to look at theory, power, agency, gender constructions, sexuality -- all of those things I learned as a women’s historian!

MM: When historian Carol K. Colburn reviewed Women of Faith, she said the Sisters of Mercy existed “in the midst of an American tsunami of Catholic women religious.” So many sisters! What makes the Mercys distinctive in this landscape?

MBFC: That's a hard question to answer. The Mercys could tell you why they are distinct from the Sisters of Charity, and so on. Of course, it has to do with the different institutions and ministries they founded, owned, and operated. For the U.S. context, the Irishness of the Mercys is important, even after the Mercys stopped being uniformly Irish or Irish-American. Their charism makes them different from other communities, even though their foundress, Catherine McAuley, based their rule on the Presentations sisters in Ireland. And Catherine McAuley makes the Mercys distinct, just as Elizabeth Seton makes the Daughters and Sisters of Charity distinct.


MM: Could we talk more about Catherine McAuley? What role does the foundress play in both the history and contemporary experiences of Mercys?

MBFC: There has always been a relationship to Catherine McAuley for the Mercys. For the nineteenth-century sisters, that relationship was much closer -- some sisters were only one or two generations from her. Since the 1980s, I believe the Mercys have a deeper connection to their foundress. I don’t want to discount the pre-Vatican II importance of McAuley, but Vatican II sent communities to rediscover their founding charism and the Mercys did just that. They simply know more about her on so many levels -- historically, spiritually.

For me, as a historian, Catherine McAuley was the starting and ending point of the book. Her words and her charism were the threads that pulled it all together. Ultimately, the Mercys as a community changed and evolved, but they tried to keep their founding charism at the core of who they were.


MM: Speaking of "real people," you and I are both historians who researched first projects burrowed in archives, and later stepped out of our comfort zones to pursue oral history. What was it like doing research with (and for) the community?

MBFC: Women of Faith required my access to all the Mercy archives in Chicago. I had too much to look at, and a specific amount of time determined by the Chicago Sisters of Mercy who hired me to research and write this history in a timely fashion. I did have the help of their archivist, Sister Joella Cunnane, who guided me towards helpful sources and let me explore the existing records. I had an office in Chicago where the archives were and the women who work in that building -- both lay and religious -- welcomed me and made me a part of their office community. I got a chance to speak with a lot of sisters, either in a focus group on a particular subject -- like experimentation in community life -- or one-on-one.

An editorial committee worked with me over the years and gave me a lot of support while evaluating my drafts. We had to become familiar with each other’s approaches to the history, but our conversations helped me get to the end of the project. There was a degree of stress on my part to make sure I was respectful of the community, even though I did not receive any pressure to hide “skeletons.” But I had to understand what it was they wanted me to do with this project. We had a lot of conversations about purpose and meaning of terms. We each had our own shorthand -- mine was that of a historian fresh from grad school and theirs was that of a religious community with a vocational perspective.

I struggled at first writing about people who are still alive. It does seem too new and too recent to write in any deep way about the 1990s and 2000s.  This is not history to me, but that doesn’t mean it can’t be written about in serious manner.  We just need to be more open to supposition. The oral histories were very helpful, because despite all the records that were preserved from this [more recent] period, there are not a lot of sources that reveal how people acted, or what motivated them. Sisters stopped keeping convent chronicles, which are wonderful sources of information. So what I found in the archives were a lot of government files -- memos, agendas, reports, surveys. The Mercys were evolving their religious life from 1964 to 1983 to 1991 to 2008 and so on. What you don’t have in the archives is how those changes impacted people.

MM: What project(s) are you working on currently?

MBFC: I am taking another look at my dissertation and working with Christine Anderson of Xavier University in Cincinnati and Sister Judith Metz, SC of the Sisters of Charity archives in Cincinnati to create an American Catholic Classroom online project at The Catholic University of America. Like the Women and Social Movements website, this is designed to pose questions, provide primary documents and secondary supportive literature. After that, I hope to begin look more closely at how Catholic men and women interact, as clergy and religious, as lay and religious. I was inspired by Mary Henold’s presentation at last winter’s American Catholic Historical Association meeting, which stressed the need to look at the intersections of women and men’s lives. It is easy when we study a religious community to forget that priests, laymen, other women religious, and laywomen interacted with a particular community of women religious.

MM: You’ve mentioned on your blog and in the book’s acknowledgements that the Conference on the History of Women Religious has really become “your people,” and I wonder how you think about the development of the field, looking forward to the Conference's next meeting in 2016?

MBFC: The Conference on the History of Women Religious has been the place where I have tested out work and explored new ideas for both my dissertation and Women of Faith. The community of scholars who regularly attend these conferences are a solid supportive group who give constructive feedback when needed and always encouragement. The field has evolved from mostly sisters writing their own history to more laywomen and men joining in the work. Younger scholars have introduced more theory and are asking questions about gender and sexuality that can only benefit the history. We have been talking about building bridges with women’s history for decades, just as Catholic historians have been talking about connecting to “mainstream” historians. When we can talk to a larger audience, it’s exciting.
Email Post
Labels: catholicism chicago monica's posts nuns sisters of mercy women's history