This afternoon's post comes from our newest contributor, Monica L. Mercado, who is currently finishing her Ph.D. in the Department of History at the University of Chicago. You can find more details about her research and teaching interests in women's and gender history at monicalmercado.com. Regular readers of this blog might remember that I'm spending much of the summer in New York State, hunting down the women (and men) of the Catholic Summer School of America while finishing the draft of my dissertation project, "Women and the Word: Gender, Print, and Catholic Identity in Nineteenth-Century America." But my plans to take a road trip north to the Catholic Summer School's former site on Lake Champlain came to a screeching halt last month when I decided to change direction and head downstate to investigate the Archives of the Archdiocese of New York, housed at St. Joseph's Seminary in Yonkers (aka Dunwoodie). The Archdiocesan Archives re-opened its doors to scholars earlier this year and to put it mildly, it's kind of a big deal.

The last time American Catholic archives were featured on this blog, Michael Pasquier dissuaded us of the notion that every researcher has to have a "horror story" full of barriers to special collections access. Certainly, I've had terrific experiences at Catholic archives big and small, but like a number of my colleagues, there was one nut I couldn't crack: the New York Archdiocese, home to so many of the individuals and communities in my study. I knew not to take it personally; even Robert Orsi had trouble making headway. In the Introduction to the Second Edition of The Madonna of 115th Street, Orsi recalled:


I encountered, as everyone studying New York Catholic history necessarily had to in those days, the much-feared gatekeeper of the city's archdiocesan archives, a nun who clearly understood it to be her job never to let anyone see the documents in her care. To this end she set impossible tasks for scholars. "I need the exact folder number of the document you wish to see," she told me the first time I contacted her, but there was no register or catalogue that I could ever discover. The forty days of Jesus' sojourn in the desert became the interval of our conversations. "It's Advent," she said; "call me after Christmas." "It's Lent--get back to me after Easter." Sacred seasons followed one another like the leaves of a calendar in an old movie.

So imagine my surprise one afternoon this spring, after nearly two years of silence in response to my emails and calls, when I noticed the Archdiocesan Archives posting images on Facebook and Twitter. In a matter of minutes, I received a friendly tweet encouraging me to make contact. Soon I had confirmation from archival manager Kate Feighery that the keywords I emailed her showed up in a handful of finding aids, and we made arrangements for my visit.

"You're probably the first person to use these boxes in twenty years," Kate said as she handed me a stack of materials. Over four days, I worked my way through the papers of Archbishops Hughes, Corrigan, and Farley, quickly finding what I needed thanks to some of the most detailed item-level finding aids I've ever seen (meticulously organized by the Archives' previous gatekeeper). Parish history files helped me flesh out some of the people and organizations I'd only come across in magazines and newspapers; a brief foray into the Archives' complete bound run of The Catholic News and its successor, Catholic New York, reminded me of the ways in which the Church influenced every aspect of the lives of its faithful. 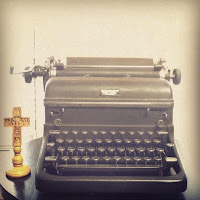 At the helm of this renewed operation is Father Michael Morris, charged by New York's Cardinal Dolan in late 2011 to make the Archdiocesan collections accessible to scholars. (Dolan, who holds a PhD in American Church History, has taken a special interest in the fate of the Archives.) Father Morris gave me a tour of the Archives' new building, a bright, modern space that will accommodate processing, storage, exhibition, and research needs. In addition to overseeing the logistics of moving the Archives into their new building, Kate is hard at work processing smaller collections, rehousing older materials, and making plans to digitize the photo collections. The move should be completed by the end of this year, but in the meantime I'd suggest packing your longest power cord--outlets are few and far-between in the temporary reading room. Just for kicks, I ended my research trip peeking at a few of the Archives' hidden treasures: boxes of vestments in every color of the rainbow, a closet full of nineteenth-century anti-Catholic books, and Dorothy Day's typewriter.

If you study the history of American Catholicism, you'll probably want to start planning a trip to Dunwoodie. The Archives' new website outlines policies for qualified researchers, and Kate continues to build its presence on Facebook and Twitter. It's safe to say that as I toured the various storage rooms, I saw more than enough future projects to keep you (and me!) busy for a very long time.
Email Post
Labels: archives archives and museums catholicism monica's posts museums and archives primary sources research

Thanks for sharing this great news, and this great experience you had! I gather the foreboding nun we all encountered in the past was too busy perfecting finding aids for the future to deal with scholars of the past. Good for her(?). Did you need a letter of recommendation/affirmation to get in?