Today's guest post comes from Haley Iliff, an MA student in the American Religious History program at Florida State. She is currently researching nineteenth-century women in the American west and their popular religious literature. 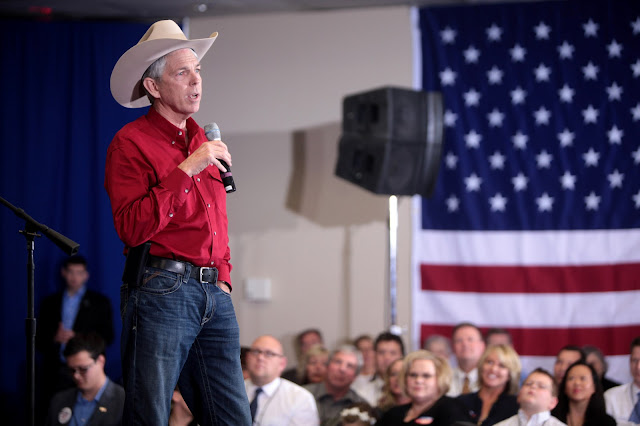 During my first year of graduate work, I wasn’t really sure what it meant to “take religion seriously,” but I was aware it was something required of me if I wanted to be a scholar. Now, about to enter my second year, I’m still not quite sure what the phrase means, but I think Charlie and Adam’s recent posts have given me a place to start thinking about “taking religion seriously” as an aspect of scholarly tone, especially the tone we take when discussion our subjects.

Charlie pointed out to us that white evangelicals often take the brunt of academia’s ironic superiority. There is perhaps a no more popular (and, for some, no more deserving) target of this academic ridicule than David Barton. Circa 2012, when his publisher Thomas Nelson pulled his book The Jefferson Lies from print after finding “some historical details included in the book that were not adequately supported,” Barton found himself the topic of numerous biting blog posts. For a while, academics had a field day on the internet with a collective reaction of “can you believe this guy!” coupled with “this is crazy, right?” Barton’s book, and his obtrusive Texas flag button-downs, became a meme for bad scholarship.

Post-Jefferson Lies scandal, I pitched my first conference paper on taking David Barton “seriously.” What I meant was I wanted to move past the collective “this is bad, right?” and find out what he was “really” doing. I envisioned myself a magician who was about to pull back a flashy curtain and give my audience a collective “aha!” moment where we could all appreciate the true nefariousness of Barton’s rhetoric. In my imaginings, I was the untouchable academic taking everyone along, attempting to show them a thing. In terms of his nefariousness, I argued that Barton was not doing history—despite adopting some of the well-worn conventions of the genre. Instead, The Jefferson Lies functions as a how-to book for Barton’s readers, giving them the steps to argue that Jefferson was a Bible-believing Christian and, by extension, America was a nation divinely blessed by God (1).

Throughout the writing process, I noticed I only used this phrase when explaining my project to academic friends. I would say “Oh, I’m working on a paper where I take David Barton seriously,” and this statement didn’t really need further explanation. Yet when my non-academic friends asked me what I was working on, it never even occurred to me to frame my project with this terminology. Instead I said to them, “Academics spend a lot of time making fun of David Barton, but I think there’s something more we can learn from him besides how to do history poorly, especially when we look at the way he talks to his readers.” This is, undeniably, a much clearer explanation of my argument, but when talking to fellow scholars there was something about the declaration that I was taking Barton “seriously” that felt more legitimate to me. This falls in line with Adam’s point that “seriousness” is an academic posturing, one that I would never use with my peers who would find that posture alienating at worst and confusing at best. It never occurred to them that I would be taking something I was working on unseriously in the first place.

To take Barton seriously meant I used my academic training to dissect and analyze his rhetoric that so easily swayed his target audience. To take him seriously meant I could be the magician pulling back the curtain telling my friends “look, this is what’s really happening.” It was as though my higher education, signaled by my ability to take him “seriously,” was an immunization to his infectious prose. I’m not really sure what to make of this. On the one hand, my professors have taught me, rigorously, how to analyze and identify constructions in texts and in subjects. I do have the training to analyze Barton’s rhetorical choices. But does my ability to pull back the shiny curtain really mean anything?

I think the academic posturing of “taking x seriously” delineates who can (and who cannot) participate in conversations. This is evident through my refusal to explain my project in these terms to non-academic friends, but more so in a careless use of the third person plural. I stated earlier that I wanted a moment where we could all appreciate Barton’s true nefariousness. I opened my conference presentation by saying “most of us are here are probably familiar with David Barton.” But who was the “we” and the “us” really? From the opening line of my paper, it was not everyone in the room, but only to those who did know who David Barton is and were ready to engage in thinking critically about his work. As Melissa Wilcox said at R&AC, the “we” in scholarship often renders questions illegible to some and renders other groups of people incapable of joining the conversation. In a sense, this is what “I’m going to take x seriously” is code for. Translation: “I’m going to use my academic training to analyze a thing and it probably won’t be accessible to those without the same academic training as me.”

That’s not to say that’s always a problem: modern academia is built on the specialization of knowledge. It’s where I came from when I tried to tackle Barton, and I still like that paper. So, while I’m not sure the claim of “taking x seriously” is always analogous with an elevated and alienating mindset, I do think it has a tendency to lean in that direction. Maybe it’s more about thinking seriously about who your audience is, what you’re trying to say to them, and being cognizant of those who you might render incapable of joining the conversation.

(1) Two of the best examples of this aspect of Barton’s rhetoric are in chapter three where Barton discusses the Jefferson Bible and ends by telling his readers, “So the next time someone refers to a so-called Jefferson Bible, ask them to identify the specific work about which they are talking…Then ask them where they got their information” (83).
(2) Photo Credit: Gage Skidmore.
Email Post
Labels: center for the study of religion and american culture david barton Haley Iliff's posts

who was also involved in the Great Texas Schoolbook Massacre. Barton and Peter Marshall got all the ink and brickbats, but no one's ever laid a glove on Dreisbach.

Barton's thesis, absent the laughable errors and misinterpretations, is actually rather modest and defensible, and he is not wrong all the time.

It's easy to knock down Barton on various factoids, but that he's a bad historian does not knock out his thesis, and is of little import to his audience, not unlike Howard Zinn's. I take them both very seriously. It is not an academic battle; catching them in error is not the same as defeating their argument.

Michael Hattem said…
This is a timely post for me as I am preparing a syllabus for a course I'm teaching this fall on the memory of the American Revolution, from the late 18th century to the present. The present (or from the 1990s to the present) takes up almost 1/3 of the course and I have devoted a class session to the contention over the argument that US was founded as a Christian nation. But since the purpose is for students to get a sense of both sides of the debate, I don't want to just assign students a condemnation of Barton, but I struggled with whether I could actually assign (an excerpt of) his book in the course. For the purposes of the course, The Jefferson Lies is a primary source and so I have, for the moment, decided to go ahead with it.
August 6, 2017 at 5:48 PM

Tom Van Dyke said…
"The Jefferson Lies" is actually where Barton jumped the shark, even in the eyes of conservatives generally sympathetic with the thrust of his argument. It is not probative; in fact, it is unfairly prejudicial against one side of the larger controversy.


"Unfortunately, [his] reliance on a reductive caricature of Protestant political theology causes him to give a false impression of how most colonial American Protestants deployed sacred and secular sources in their political thought. The result is a work of history whose questionable methods and underlying assumptions are every bit as telling—perhaps more so—than the historical chronicle itself."


Although it could be--and not unfairly--this was not written about Barton, but of the gold standard of American religious history, Mark Noll. If the inquiry is on error and historiography, the winners and losers should not be chosen in advance.