Six Questions With Kyle Roberts: The Rise of Evangelical Gotham 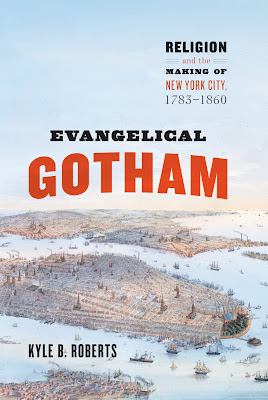 Kyle Roberts is Associate Professor of public history and new media at Loyola University Chicago and director of the Jesuit Libraries Provence Project. I recently interviewed Kyle about his new book, Evangelical Gotham: Religion and the Making of New York City, 1783-1860 (University of Chicago Press).

PC: What happens to early American Religious History – and American history – if we locate evangelical revivals in New York City rather than at Cane Ridge? What should we rethink?

KR: In graduate school in the early 2000s, the scholarship that I found most engaging was about evangelicalism and urban religion. Yet the two rarely overlapped. Antebellum evangelicalism was often told as a rural story – more likely to focus on camp meetings on the frontier than on outpourings of the spirit in urban churches. We knew more about Cane Ridge in 1801 than Allen Street in 1832. Works of urban religion tended to be post-Civil War studies of religious groups moving into urban environments created by others and trying to make them their own. I wanted to know what role the religious played in building the modernizing city in the first place. No city grew at a more transformational rate than New York in the first half of the nineteenth century, so I thought I would look there.


New York City turned out to have played a significant role in the expansion American evangelicalism. It became a national, and later international, center for evangelical cultural production. The printing presses of the American Bible Society, the American Tract Society, the Methodist Book Concern and other evangelical ventures produced the materials that were read across the country. Every May, the leaders of these societies came together in the city to plot their strategies for the coming year. New York’s place as the nation’s commercial center opened up access to both funding and distribution routes that brought these works across the country and around the world.

These institutions, while nationally supported, would not have existed without the growing evangelical community in New York. They provided the financial resources, wrote the tracts, and ensured the distribution of these works. As the writings of Michael Floy, Phoebe Palmer, and others show, urban revivals energized evangelical New Yorkers in their national – even international – project.

My hope in Evangelical Gotham is ultimately to recover the vibrancy (and the tensions) within New York’s urban religious community, but also to restore its place to the larger national and international story that we tell about the spread of evangelicalism. 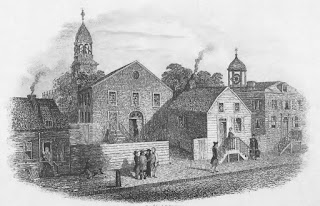 PC: Your work brings a cast of fascinating characters to our attention: Isabella Marshall Graham (widow activist), Ezra Styles Ely (urban missionary and social reformer), Phoebe Palmer (theologian and missionary), and Michael Floy (prolific reader of urban evangelical texts). Tell the blog about your favorite character and explain how he or she illumines the broader story you tell in Evangelical Gotham.

KR: Phoebe Palmer was, perhaps, the story that surprised me the most. I remember going to major research libraries and finding so few of her works in their collections. How is it that someone who had such an impact on mid-nineteenth century evangelical theology been so forgotten?

What fascinates me about Palmer’s story is the question of what happens when you get your wish. The post-revolutionary generation of evangelical New Yorkers had the chance to create in the city a world that certainly wasn’t there when they arrived from destinations around the Atlantic World following the American Revolution. Palmer represents the first real generation of native-born evangelical New Yorkers. She grew up in a world where evangelicals put into practice their ideals for promoting conversion and social activism. Yet rather than easing the course of their spiritual journeys, this world created new anxieties for the rising generation, especially about their inability to live up to what was expected of them. In Palmer’s case, it proved to be a remarkably productive tension, inspiring her to reach back to early generations to recover ideas about holiness that set the theological agenda for many evangelicals of her generation and those who followed.

There is far more to be written about the children of nineteenth-century evangelicals!

PC: In addition to a roundtable on your own book, the Religion in American History blog recently celebrated the twentieth anniversary of John T. McGreevy’s Parish Boundaries. Do the urban evangelicals you study have a “idiom” about space? Or are they defined by a constant crossing of space into other spaces?  How does evangelical theology clash or sync with urban spaces in a rapidly expanding city?

KR: Great question. On the one hand, I would argue that the evangelical approach to urban space was dynamic and flexible. Evangelicals thought very creatively about the ways in which secular urban spaces could be put to sacred uses. What made a space sacred was the preaching of the Word to a gathering of engaged people. All they need for that was a place for the preacher to stand and some benches. This allowed storefronts to become churches without much trouble. When they encountered a new kind of space, they thought about what it meant to the audiences that inhabited it. For example, when they preached on board a ship, they respected the meaning ascribed to different places on a deck and positioned people relative to them (see the illustration of the Bethel Meeting on the Receiving Ship Fulton in the New York Navy Yard). In boardinghouses, a different dynamic (and hence type of participation) unfolded. For urban evangelicals, spaces could move easily between sacred and secular uses and meanings.

On the other hand, evangelicals certainly understood the importance of branding and marking the landscape within the urban marketplace. The first John Street Methodist church in lower Manhattan (erected 1768; seen in the illustration here) is exemplary of what I call the evangelical vernacular that proliferated across not only New York, but much of the East Coast in the late eighteenth and early nineteenth-century. These structures are often three-bays wide, one-and-a-half stories tall, their gable ends face the street, and they purposely do not have steeples (although they might have a cupola).  This is an extraordinarily effective urban form, one that can be built as easily at the back of lots as on the corner of an intersection, as large or small, with as expensive or as cheap materials they could afford. But most of all, it all those unfamiliar with the city (which was most people in New York in the nineteenth-century) to quickly identify an evangelical congregation.

PC: One of the key areas where your book helps us to see the dynamism of the city in stoking religion is print culture. How did the city promote religious reading? How did the city help evangelicals as readers and producers of print? How does Evangelical Gotham fit in with the history of print culture in the early republic?

KR: Evangelical New Yorkers appreciated that they lived in a city that was competing with Philadelphia for supremacy in the growing nation. The race to be a national center for print production was one of many such competitions. At the turn of the nineteenth century, London evangelicals had suggested the efficacy of the organized production and distribution of religious print through associations like the Religious Tract Society and the British and Foreign Bible Society. Within a decade or so, New Yorkers followed their lead.

By the second quarter of the nineteenth century, evangelical print was being produced by non-denominational, denominational, and even commercial printers across New York. Non-denominational societies such as the American Tract Society and American Bible Society relocated to the city and made it their base of operations. Denominational publishing houses, such as the Methodist Book Concern, also set-up shop. Both sought to produce as much print and to make it as affordable as possible. Realizing the money to be made from the evangelical market, commercial publishers also began to publish a range of religious works. Harper Brothers, for example, was founded by four brothers who had grown up in the John Street Methodist Church. Commercial publishers kept their secular titles, but also profited from the religious ones they sold. Evangelicals made it very difficult to avoid their printed works; they even distributed tracts to every household in the city in 1835!

Not only were evangelical New Yorkers surrounded by religious print, but they also had the opportunity to contribute their own voices to it. A small tract written by the nurseryman and Sunday school teacher Michael Floy was picked up and printed in the national Methodist magazine, The Christian Advocate and Journal, soon reaching audiences across the nation.

I think we have underappreciated the extent to which evangelical adoption of new printing technologies, their experiments with the organization of wide scale production, and their innovative thinking about distribution not only benefited their own objectives, but also advanced printing more broadly in the city and nation. 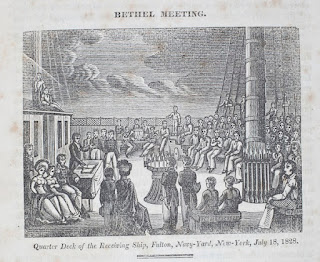 PC: Explain for the blog what you meant on page 7 of the introduction: “Evangelicals did not just live in New York; they lived through it.”

KR: Early on I took to heart Robert Orsi’s admonition that urban religion was not simply religion that took place in cities, but religion that existed at the intersection of religion and the city. Taking seriously that intersection opens up the realization that the faith of evangelical New Yorkers was dependent, in both conscious and unconscious ways, on the city around them. Every walk through city streets, experience in the marketplace, and interaction in the workplace had the potential to be just as formative as services in their churches and Bible reading in the family parlor.

As I note at the end of the first chapter, at some point in the construction of their spiritual autobiographies, evangelical New Yorkers invariably reflected on the place of New York in their journeys. For the Baptist preacher Charles Lahatt, New York was just one of many stops along a lifetime’s journey that began in the German states and ended as a missionary in western New York. Freed slave George White saw New York City as a land of deliverance, especially compared to the Virginia of his enslavement. And for Divie Bethune, New York was the Celestial City, to which the Lord had directed him “from that sink of iniquity, that blackness of darkness, Tobago” where he had been a clerk on a plantation. New York was many things to many people: a safe harbor in a storm, a conflicted land of deliverance, and even a heavenly reward. To tell the story of urban evangelicals we need to focus on both the urban and the evangelical.

KR: I’m just back from a research trip across the Midwest to a variety of nineteenth-century Catholic settlements. My Loyola students and I have been working on the Jesuit Libraries Provenance Project (https://jesuitlibrariesprovenanceproject.com/) for several years now, and as I move towards writing a book about what we’ve uncovered, I feel the need to see their churches, communities, and homes. As you’ve noted in your questions about my focus on space, I find it difficult to write about a subject if I haven’t seen the physical place in which they lived, moved, and had their being. Writing about New York while a graduate student in Philadelphia and living in Boston was relatively easy: I could hop on a bus or train and be there in a few hours. The Catholic world of the Missouri, Mississippi, and Ohio River valleys is a much broader space.  Westphalia, Hermann, Perryville, and Teutopolis are a little more difficult for me to ordinarily reach from my academic home in Chicago. But it was worth it. Logging over 2000 miles in a rental car gave me plenty of time to reflect on how the landscape of the Midwest might shape not only the economic, political, and social worlds of Catholics, but also inform their spiritual worlds as I gear up to start writing about them.