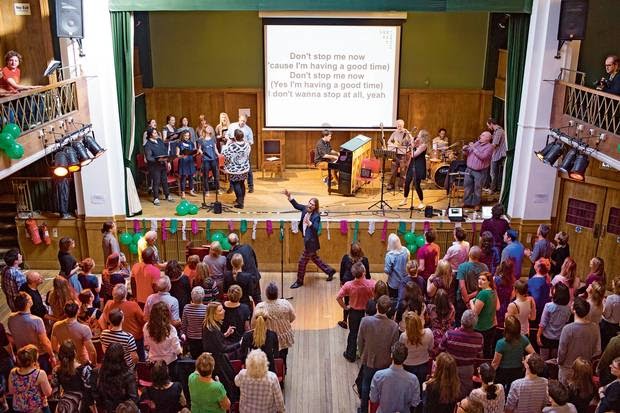 Former preacher Jerry DeWitt engaged in this unusual call and response with participants at a recent Freethought Convention that I attended at a local university. This meeting was the first annual secular convention to take place in East Texas and it attracted hundreds of folks from the region who came to commune with likeminded atheists/secular humanists/skeptics. I went to observe and to hear a bit more about a new interest of mine: atheist megachurches. I’ve read a bit about atheist congregations in the news (the NYTimes had a good article last year) and growing international organizations like Sunday Assemblies (recently covered in Salon), which actually engage in missionary work to promote godless congregations. Evangelical atheism is hipster chic and oddly Christian corporate. And it’s just a little complicated. Are they “churches” (which is something that is debated within secular circles) and how do they fit in to the traditional concepts of “congregations” and “fellowships”? Much of their success stems from their emulation of popular Christian church designs—their services mimic Christian worship and congregations provide a sense of community and support for members. The difference is they do all of this in a “godless” environment. And that’s a big difference. 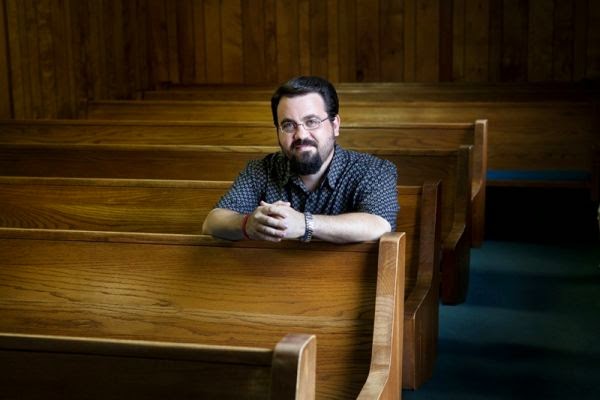 In the southern states, the approach to organized atheism makes a lot of cultural sense. The atheist preacher I heard, DeWitt, runs Community Mission Chapel in Lake Charles, Louisiana. He is a member of a cohort of former Christians who have left the faith and adopted a secular humanist worldview. The atheist congregations that they construct or join are described as an attempt to bridge their atheism with a culture that revolves around evangelical Protestantism. DeWitt (a former Pentecostal preacher) argued that there is so much pressure in the Bible Belt to belong to a church—business relationships are formed in Sunday School classes and friendships in the sanctuary pews—that the irreligious need a space, too. His chapel carves out that space within a society that often excludes non-believers. It also offers a support network for congregants because they do not have connections to the care and service of local Christian churches. DeWitt contends that his chapel removes a lot of pressure for attendees who are often asked which church they belong to. If they are not “out” as atheists in the conservative, religious culture of Louisiana, then claiming membership to the innocuously named “Community Mission Chapel” can help them maintain their atheist anonymity.

Certainly, secularism is not a new force in the American religious/intellectual sphere. Susan Jacoby has written at length on secularism as a major influence on American public life. I found some passages in Philip Hamburger’s Separation of Church and State interesting as I was poking through the literature to investigate historical touchstones for the present phenomenon.  Hamburger’s description of the evolution of the National Liberal League and American Secular Union in the 19th century struck me as eerily similar to the current atheist movement. DeWitt can count himself as part of a preaching tradition that includes figures like Samuel P. Putnam. In the 1880s, Putnam was dubbed the “Secular Pilgrim” and he traveled as an atheist itinerant, “preaching the gospel of Humanity.” He led services at a festival given by the Chicago Secular Society, which met in a repurposed church building and opened their services with a choir greeting the congregation. Putnam was one of several secularists who created churches and Sunday Schools aimed at combatting the pervasive Christian influence on the republic (see Hamburger, Separation of Church and State). Christian forms for atheist missions—it’s starting to sound familiar, no? I’d also reference David Hempton’s Evangelical Disenchantment: Nine Portraits of Faith and Doubt here because it seems to have particular relevance to folks like DeWitt who exited Christianity to form their own chapels of nonbelief. Current atheist churches might not have the same goals as past freethought missions, but they do share the notion that there should be space in the public sphere for the irreligious. I’m looking forward to hearing more from Leigh Schmidt, too, on the subject of public atheism, as there is much more to the history here that needs to be explored. (See Emily’s post from last year.)

While DeWitt’s chapel reflects southern evangelical trends (it’s a smaller congregation, the services include exhortations, singing, and a sermon delivered with a recognizable Pentecostal fervor), Sunday Assemblies draw on the practices and promotional activities of Protestant megachurches.  Sunday Assemblies hold weekly meetings in cities across the United States and Great Britain. They have also reached into Belgium, the Netherlands, New Zealand, Canada, France, Hungary, Germany… it’s a massive movement. The organization professes to be a “godless congregation that celebrates life.” They want to encourage members to “live better, help often, wonder more.” While they do not have a doctrine, their charter is organized like a church doctrine and their services include liturgy, singing in unison, and a message. They don’t accept tithes, necessarily, but they do engage in fundraising through indiegogo and through their own website. And that swanky website appears to be very consciously designed to look very much like some of the major megachurch websites. (I’ll draw your attention to a past post by Kate Bowler on this fascinating subject.) By adopting similar advertising patterns and offering comparable amenities and community-building activities, the assemblies are taking on mega status. I’m curious to look further in to the pop culture references they make in their services and compare those to the messages of evangelical pastors like Matt Pitt and Ed Young, Jr (which I’ve written about here and here and… more places).

As the movement grows, I’m interested to see if and how it takes on cultural patterns of other megachurches. Will they continue to advertise the same way? How much influence will popular culture have on both secular and spiritual megachurches? And how will Christian churches respond to the growing appeal of atheist congregations? While secular churches have been around for a while, it appears that the strategies utilized by Christian megachurches have established successful patterns for the growth of atheist congregations, which might (should) make Christian leaders question whether it’s the method or the message that is drawing so many new members.

mhulseth said…
In what ways do we think that this is importantly different from a large Unitarian church, albeit with more of an evangelical cultural flavor?

That is, is the relation of this phenomenon to a small Unitarian (or perhaps even some mainline Protestant) congregations

the same or different than the relation between a Baptist-flavored megachurch and small Baptist congregations?
October 18, 2014 at 10:49 AM

Tom Van Dyke said…
There's something improbable if not absurd for "freethinkers" to be doing anything in unison.

M. Hulseth is quite right about "unitarianism," which started by denying the Trinity and ended up not believing in even one God, necessarily.

In the end, "liberal" theology became "humanism," which became mere politics, and liberal politics at that.

This is a very good paper on Unitarianism, which was financially obliged to merge with the theologically noncomplementary Universalism in 1961, which today is UUism, which is pretty much as M. Hulseth notes

We've seen this movie before. Atheist "churches" are just cutting to the chase.