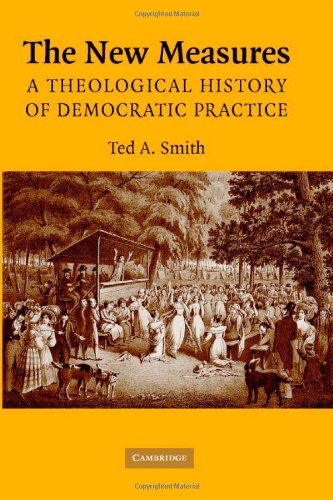 Today's guest post comes from Ted A. Smith, professor of ethics and preaching at Emory University's Candler School of Theology. Author of The New Measures: A Theological History of Democratic Practice (2007), Dr. Smith is a leading young scholar in the field of political theology, a field we rarely discuss here at the blog (even though they have a blog like RIAH  http://www.politicaltheology.com/blog/).

After being entranced by Smith's first book - almost as much as audiences certainly were with Finney's preaching - and then being wowed by his current manuscript on John Brown and the ethical limits of righteous violence - I asked Professor Smith to put together a "so you want to begin thinking about political theology" list. And here it is:

Talk of “political theology” runs across a wide variety of conversations that do not necessarily overlap.  The term has been used to describe almost every kind of interaction between religion and politics.  In this short list I do not try to provide a comprehensive description of those conversations.  I rather mean to suggest one way into them.  This list is not a map of the woods, but a series of blazes that promises to lead a reader to places worth going.


Limiting the list to just twelve titles required neglecting whole shelves of good books.  A list of “honorable mentions” would only compound the problem.  I have tried to give the list some focus by selecting titles from the last 100 years.  Augustine’s City of God and Hobbes’s Leviathan are indispensable, but also well known.  A more current list seemed likely to be more useful.


I have also tried to focus the list by emphasizing one sense of “political theology” above others.  The books I suggest below mostly leave aside questions of what religious voices have said or should say to a differentiated political sphere.  These are important questions, worth another list of their own.  But the books below try to work at a more basic level, asking questions about how a social order comes to make sense, how structures of legitimation are produced and internalized, and how people gain a feel for what it means to be connected to one another.  In Claude Lefort’s terms, the books on this list largely set aside questions “within the social” in order to consider “the principle of the institution of the social.”


Conversations about “political theology” in this sense cut across the boundaries between disciplines like history, politics, philosophy, law, and the study of religion.  The most contentious of these crossings transgress the lines between fact and norm, description and speculation, secular and sacred. The best books come from many different fields.  They can be read into many more.  I hope the list below reflects something of this breadth, variety, and vitality.


R. A. Markus, Saeculum:  History and Society in the Theology of St. Augustine (Cambridge)


These three titles matter because of the quality and significance of their historical work.  But they stand out from a large number of other excellent historical studies because of their feel for the theologies that can orient people’s lives.  They are, in Weber’s phrase, religiously “musical.”  Markus and Kantorowicz are steadily cited in works of political theology.  Marvin and Ingle seem headed for a similar prominence.


Each of these volumes contains some excellent essays.  Together the three books do a lot to suggest the range of work being done in contemporary political theology.  The volume edited by Davis, Milbank and Žižek highlights the energy generated in conversations between cultural critics working out of the legacies of Marxism and theologians committed to a “radical orthodoxy.”  De Vries and Sullivan’s massive book draws especially but not exclusively from authors associated with some school of contemporary critical theory.  It includes essays from thinkers like Talal Asad, Judith Butler, Jürgen Habermas, and Chantal Mouffe.   Lloyd’s book – with essays by Daniel Boyarin, Bonnie Honig, J. Kameron Carter and others – does more than any I know to correct the tendency of recent political theology to overlook the significance of race for its core questions.


These books by Cavanaugh, Kahn and Rose are not only powerful arguments but also works of haunting beauty.  Cavanaugh, a theologian, gives a thick history of the Chilean church’s reaction to Pinochet on the way to a devastating criticism of “gnostic” political theologies that hand bodies over to the state in exchange for the right to work with disembodied souls.  Kahn, a theorist of law, has written the best book I know on the reciprocal phenomena of terrorism and torture.  In remarkably clear language he illumines the full political significance of suffering bodies – a significance that can best be explored in theological terms. Rose, a philosopher, offers fierce resistance to a post-modernism that she argues has undermined and abandoned critical reason.  Rose has passed through the fires she diagnoses so clearly.  And so she offers not a naïve plan to return to older foundations, but a sketch of what it would mean to rebuild the walls of a city in which political reasoning is possible.


This list would not be complete without reference to someone who calls the whole conversation into question.  Lilla does just that.  He traces the ways that the modern West achieved a “great separation” between politics and theology – and warns against the perennial temptation to betray this achievement.
Email Post
Labels: political theology religion and politics ted smith posts theology

Patrick said…
This is immensely helpful, and I agree that it's a conversation (or set of conversations) that American religious historians could very much profit from. Ted, I'll be anxiously awaiting your work on Brown.
January 8, 2014 at 10:23 AM

Not so well known. And further conversation is less than useful without these foundations.

When one starts at the end

The volume edited by Davis, Milbank and Žižek highlights the energy generated in conversations between cultural critics working out of the legacies of Marxism and theologians committed to a “radical orthodoxy.” De Vries and Sullivan’s massive book draws especially but not exclusively from authors associated with some school of contemporary critical theory.

one is unlikely to make their way back to the beginning.