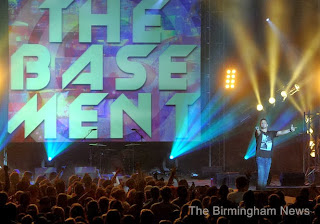 I was tempted to name this post “Mic’d Phone Calls from a Birmingham Jail” for all of you civil rights scholars out there. Matt Pitt is serving a year sentence for impersonating a police officer and the rhetoric surrounding his conviction has been… well, many adjectives. Surprising, galling, bizarre? You’ll have to decide for yourself. In my previous posts, I commented on the reasons behind the popular Birmingham youth pastor’s arrest and on his frenetic interview that hit YouTube weeks later. In the impromptu (and now infamous) interview that Pitt gave a local reporter before his arrest, he compares himself to Martin Luther King, Jr., and Creflo Dollar. The association with King has bloomed into an actual mushroom cloud of civil rights analogies that make zero sense (historically speaking) but are driving the #FreePitt movement.

The #FreePitt website includes several references to Pitt’s role in a continuing Civil Rights Movement. In their description of Matt, the Basement-supported website describes the pastor in ways that directly relate him to King’s mission in Alabama (with some historical inaccuracy peppered in for good measure): “Matt Pitt leads a non-profit outreach known as The Basement in Birmingham, AL. Birmingham is notoriously known as the stained and tainted city that launched the 1963 Civil Rights Movement. It was the most segregated and oppressed city in the nation for the African American race. This is why Martin Luther King, Jr. traveled to Birmingham, AL to the frontlines of the civil right’s war. This is also where Martin Luther King, Jr. was jailed for parading without a permit.”
The site recognizes that it may be difficult to see how the two men’s causes are connected: “Many cannot see the correlation of the 1963 Civil Rights Movement and the movement Matt Pitt began over 10 years ago that lead him from a four person Bible study in the basement of his parent’s house to the City Hall lawn of downtown Birmingham, AL" No, many cannot.

The overarching (and vague) notions of hope, love, and Christian mission are woven throughout any correlations #FreePitt makes between the two leaders, who share very few characteristics in terms of race, message, context, or reasons for imprisonment. They are both preachers who spent time in the Birmingham jail—that part is true. But the #FreePitt folks also drive home their points with images that promote an emotional connection between Martin Luther King’s trials and the struggles of civil rights movement in Birmingham and Pitt’s ministry and imprisonment. This posted image is captioned, “Matt Pitt brought to and threatened by JT Smallwood [the sheriff] in MLK cell”: 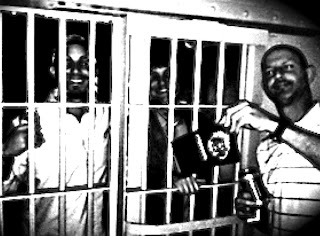 #FreePitt also created this collage that compares a Pitt-led march in the city to the famous 1963 SCLC campaign: 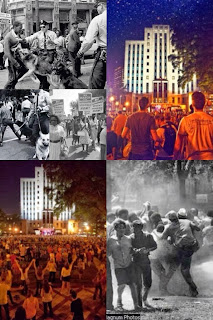 Pitt has reflected this rhetorical connection to the Civil Rights Movement in his calls from prisons, where he addresses congregants and expresses gratitude for their support. Members of the Basement community have joined together in protest tailgates (aka “jailgates”) and prayer circles to demonstrate solidarity for their fallen leader, and he thanks them for their letters that keep his spirits up. Pitt also boasts about the work that God has him doing behind bars and reflects on what is next for the Basement.

When he addresses the crowd of his youth followers from prison, one of his staff members holds a cell phone up to a mic so that Pitt can still talk to the many people who continue to gather for the Basement events. Matt believes that his prison stay was prophesied months earlier and that it is necessary for the further development of the movement. “God’s given me a vision,” he proclaims, “that he’s going to send me to jail to minister to these people.” He’s not enjoying his time there (“I tell you one thing, jail reminds me of what hell would be like. I don’t know what hell would be like, but it’s like jail.”) but he does believe that it’s expanding his opportunity to minister, stating “I can’t tell you what a blessing it is to serve here.” So many inmates are coming to Christ, he claims, that they are telling him: “Now that you done come to jail, you’ve become the nation’s pastor.” His time as a Jefferson County inmate is increasing his popularity and Pitt argues that the Basement will now be able to reach communities across the nation. “Everybody and their mama” is going to want to attend a Basement gathering, the young pastor tells his followers. (And if the message itself is not enough, Pitt also let inmates know that there are some beautiful women at the Basement, which may get them to come after their release.)

Pitt is no stranger to attracting more members, and is using his jail stay to further expand his ministry. In its ten years of meeting, the Basement has achieved impressive growth (with average attendance at about five thousand). The dramatic services (with smoke, loud music, and club lighting) tiptoe around racialized imagery while drawing a diverse audience. Well, they tiptoe in steel-toed boots. These services provide more fodder for a broader discussion of Pitt’s association with African-American history in Alabama.

Other megachurch pastors and youth groups appropriate racial stereotypes. I’ve written about Randy and the Flea’s music videos in the past and Ed Young, Jr. is well known for his, erm, raps.

The question, then, is how successful are white pastors in appropriating parts of African American history and culture to grow their ministries? Ed Young, Jr., is immensely popular with a megachurch ministry outside of Dallas, Texas. Matt Pitt’s movement in Birmingham is only growing as a result of his cries of civil rights injustices. Like I said, there are many adjectives one could use to describe Pitt’s prison ministry in Birmingham and correlations that the #FreePitt people are presenting on the Internet. But the one adjective that may be the most accurate is: "effective." “Letter from a Birmingham Jail” and “Mic’d Phone Call from a Birmingham Jail” have very little in common, but the Basement is redefining the narrative to find commonalities that will resurrect Pitt’s reputation for the youth of Alabama.

Tom Van Dyke said…
The question, then, is how successful are white pastors in appropriating parts of African American history and culture to grow their ministries?

Is this a 21st century play on "The Apostle?" Deeply flawed man--even a criminal--but comfortable in his own skin in any milieu. And among the some and many of the young whites, American culture leans more African American than "white." [More Donny than Marie.]