Christians and the Color Line

Today's post interviews Rusty Hawkins and Phillip Luke Sinitiere, the editors of a new book Christians and the Color Line: Race and Religion after Divided by Faith, which is rumored to be coming out with Oxford on November 6.  Check the end of the post for a table of contents. 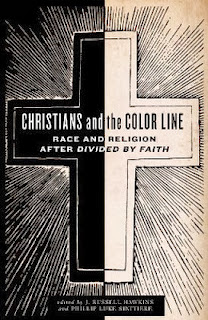 Karen Johnson (KJ): In a nutshell, what is Christians and the Color Line about?

Phillip Luke Sinitiere (PLS) and Rusty Hawkins (RH): Christians and the Color Line is about the changing, but still fractured state of race relations within American Christian communities. The book’s first section offers an accounting of important moments in the history of racialized Christianity in the United States. The second section provides social scientific assessment of what brings faith communities together across racial and ethnic lines, while also examining how communities who claim fidelity to a purported Christian message of unity and reconciliation continue to be wedged apart. We should be clear that this book is in no way a “how-to” volume for religious leaders, but at the same time we think it offers vital perspectives for anyone interested in racial justice within religious organizations. The book also offers a strong challenge to those who believe American Christianity has entered some “post-racial” era. This simply isn’t true. All of the chapters take as their starting point the important claims Michael Emerson and Christian Smith made in their book Divided by Faith: Evangelical Religion and the Problem of Race in America. Taken as a whole, Christians and the Color Line updates, challenges, and in some cases revises Emerson and Smith’s findings.

KJ: What do you think is most exciting about the book? Why?


PLS & RH: What is most exciting for both of us is that hopefully this book can contribute something constructive to current discussions and debates about religion, racialization, and racial justice. As editors on this project we are riding just the coattails of the talented cast of contributors. But we hope the book can demonstrate that both scholars and interested religious folk have yet to fully come to grips with Christianity’s (both Protestant and Catholic) complicity in the perpetuation of racialization and the role Christianity has played (and can play) in both individual and institutional initiatives towards racial justice. These matters are complex and nuanced, and fundamentally tied to power; we hope Christians and the Color Line offers a realist assessment of the historical situation and robust look at some contemporary situations.

KJ: Tell me about the book's origins and putting it together.

RH: Divided by Faith was an incredibly important book in shaping my understanding of evangelical religion and race, which is what I study as a historian.  As a graduate student at Rice University, I had the opportunity walk across campus and dabble in sociology with Michael Emerson, which only deepened my respect for his work.  In late 2009 I was talking to fellow Rice alum (and RiAH contributor), Luke Harlow, who casually mentioned that the following year would be the ten year anniversary of Divided by Faith. Luke suggested I should organize an anniversary conference like the one Randall Stephens had pulled together for Mark Noll’s book The Scandal of the Evangelical Mind. I thought it was a great idea and so did my institution. In October 2010, the John Wesley Honors College at Indiana Wesleyan University hosted a decade retrospective for Divided by Faith and brought in sociologists, historians, and theologians to engage with the claims of Emerson and Smith’s book and present research on race and evangelical religion. The essays in Christians and the Color Line come primarily from papers presented at the Indiana Wesleyan conference along with some additional essays contributed by scholars whose work fit precisely with the aims of the volume. When it came time to edit the book, Phil was the obvious choice for co-editor.  His own research and interdisciplinary interests were perfectly suited for a project like this.  Plus, he had experience collaborating long distance on other book projects and was able to walk a neophyte like myself through the process!

PLS: While I think Rusty overstates any qualifications I might have for collaborating on an edited volume, another genesis of the essay volume (as Rusty alluded to) is a shared appreciation for Emerson and Smith’s work in Divided by Faith along with a sincere respect for Emerson as a person. (I don’t know Christian Smith, but I have long found his work insightful and very helpful in my own scholarship.) I got to know Michael (and Rusty, along with several of the contributors) personally through a Calvin College seminar a few years ago, and as his Foreword to Christians and the Color Line indicates, there is a certain moral and ethical fortitude that grounds his sociological work. Not only does Michael write and research about race and religion, his own personal commitments attempt to embody a constructive solution to persistent racial divisions within religious communities. (His book People of the Dream discusses part of this story as does my article “Will the Evangelical Church Remove the Color Line?: Historical Reflections on Divided by Faith.”) Some academics liken their scholarship is their activism; there’s an additional layer of “activism” in Emerson’s life that bolsters his scholarship, and as I’ve become more familiar with Michael’s life story this is something I have come to respect a great deal.

With respect to collaborating with Rusty, I have to say it was an altogether enjoyable experience. Early on in the project we spent a weekend in Houston editing the manuscript; that face-to-face time was crucial in outlining the overall shape of the volume and really getting the Introduction off the ground. After that we exchanged countless emails and spent hours on the phone hashing out issues and questions. We also spent a good deal of time corresponding with the contributors—clarifying interpretive points, encouraging clearer prose, and otherwise praising some really fine work. While Rusty and I differed on some interpretive matters—as historians and friends always do—I found that we often anticipated each other’s questions and quickly became of one mind in wishing to present a readable volume of essays as well as a constructive intervention about questions surrounding religion and racial justice.

KJ: Ultimately, why should we read the book?

PLS: You should read the book because race and religion still matter greatly in the United States. This book offers ways to understand the deep entanglements between race and religion. The chapters will disturb you and perplex you; they will intrigue you, and challenge you. RH: You should also read it because it is an eminently readable book that would work wonderfully in seminary classrooms and/or even undergraduate courses.  And, frankly, with the way it’s priced, you really can’t afford NOT to read it!

Chapter One
"Neoevangelicalism and the Problem of Race in Postwar America"
Miles S. Mullin, II

Chapter Ten
"Much Ado About Nothing? Rethinking the Efficacy of Multiracial Churches for Racial Reconciliation"
Korie L. Edwards

Randall said…
This looks like a great volume. Will need to pick up a copy. I'm working on a short piece at the moment on white evangelical responses to the CR Act of 1964.
October 19, 2013 at 1:59 PM

Phillip Luke Sinitiere said…
Thanks, Randall. Look forward to seeing your article. Please notify us upon its publication.
October 19, 2013 at 2:01 PM