Digital Religion in the Classroom


Of the many terms people use to define the current state of the digital humanities, the one word I often use is “breathless.” For many scholars, digital technology is either the humanities’ savior or the final nail in its coffin. Either way, it is momentous. And big. Crowdsourcing. Open Access. Massive Open Online Courses. The death of the monograph. The birth of the blog. Academic Tim Gunn. This is the stuff of epics and tragedies.

But to truly measure the impact the web is having in transforming (or having transformed) the humanities, it is often helpful to look at its seemingly more mundane influences. For it is at the level of daily practice that a methodological turn's most most profound effects can be observed.

Take Lincoln Logarithms for example. A project of Emory University’s Digital Scholarship Commons (or DiSC, as the Applefication of the modern acronym demands), Lincoln Logarithms uses text mining software to analyze a collection of digitized sermons from 1865 eulogizing a recently assassinated Abraham Lincoln. The results are pretty interesting. Using data mining programs like ViewShare, Voyant, and MALLETT—tools that can track the repetition of phrases or the proximity of terms in a text—the project found that where Northern ministers framed Lincoln’s life around specific accomplishments like the abolition of slavery, Southern ministers emphasized Lincoln’s longing for peace.

While this might come as no surprise to anyone familiar with, say, nearly a hundred years of Reconstruction historiography, the significance of Lincoln Logarithms lies far beyond its results. The project’s real strength stems from the fact that it was conceived, researched, and published primarily by DiSC’s three graduate student fellows. According to Emory’s widely circulated press release, these graduate students worked in conjunction with the university’s librarians and academic staff not only to analyze the library’s sermon collection, but also to evaluate the reliability of new methods in digital humanities research. And they did this all while getting significant media attention and exposure. Quick: can you name the last graduate student seminar paper to be written up by one of the largest professional organizations in the humanities? 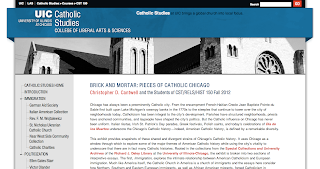 This potential to connect student work with the wider world is one of the most exciting, and perhaps the most novel, opportunities the insurgent digital humanities affords. At every level, collaborative digital projects like Lincoln Logarithms have the potential to make our students not just passive receptors of scholarly knowledge, but active contributors to its production as well. I learned this last fall when I decided to the transform the final project of my American Catholic History course at the University of Illinois at Chicago from a research paper to a collaboratively curated digital exhibit on Chicago’s Catholic history. The assignment's instructions were, on the surface, simple. Students were instructed to work in groups of three or four to research pre-selected archival collections at UIC’s Richard J. Daley Library. From there they were to select two or three illuminating documents on Catholic Chicago, have the library digitize them, and write a paper aimed at the general public that situated those documents within the broader arch of American Catholic history. Well, I’m thrilled to announce that the final project, Brick and Mortar: Pieces of Catholic Chicago was recently published by UIC’s Catholic Studies Department (a fine department discussed on this blog before). When you get a chance, check out the hard work my students put into their project.

While I’ll readily admit that overseeing a digital project like Brick and Mortar involved more work than your average research paper, I fully intend to continuing assigning similar kinds of projects. The payoff simply far outweighs the extra effort. In addition to reinforcing course content, the assignment afforded me the opportunity to meld the core of a liberal arts education (reading critically and writing clearly) with a little new media literacy. Alongside archival research, I was able to talk with students about copyright (Why, after all, were we only using UIC sources?). In addition to talking about writing for an audience, I was able to have them literally write for the public. And believe me, the moment you tell students you are going to make their work available for the world to read, they start taking their writing a lot more seriously.

Of course, pulling off a digital project like Lincoln Logarithms or Brick and Mortar does need some extra-classroom support. It requires supportive archival and IT staffers, not to mention a cache of sources to digitize and the funding to digitize them. I was fortunate to have all of the above, including a generous allotment of funds from UIC’s chair of Catholic Studies, Ralph Keen. But while there may be institutional obstacles to overcome in taking on digital classroom projects, I can assure you that one thing you will not be short of is student interest. The students in my course were excited to take on the project, and many went to great lengths to craft some really interesting essays--in a survey course no less.

And for those of you who fear the digital turn spells the end of the humanities as we know it, I’m happy to report that when I surveyed the students to ask them what about the project they found the most rewarding, nearly all of them claimed conducting archival research. Perhaps to get our students back into the archive, we need to get them online.
Email Post
Labels: abraham lincoln catholicism chris cantwell's posts digital history digital humanities teaching teaching philosophy teaching resources

Anonymous said…
Excellent educators bridge the technological gap and provide students with authentic learning experiences. Awesome article and teaching! Would you like to train some teachers, Dr. Cantwell?
July 10, 2013 at 7:17 PM