American Islam in Dearborn: A Portrait

Today's guest post is from Dan Bryan. He received a B.A. in American History from the University of Chicago, and has founded the site American History USA. His goal is to empower Americans of all backgrounds to increase their historical literacy. What follows is a summary and short history of the Muslim community in Dearborn, Michigan. Two books that were very helpful to the author were Islam in America by Jane Smith, and American Islam: The Struggle for the Soul of a Religion by Paul Barrett. 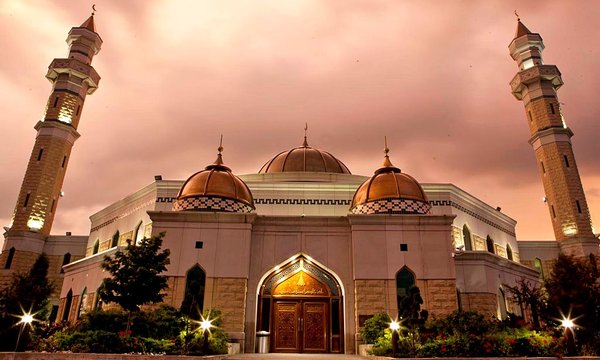 Henry Ford paid good wages in the 1910s, and he hired workers from a wide variety of backgrounds. For whatever reason, a number of Lebanese were among those that moved to Dearborn, Michigan to take advantage. Most of them were Christians, but those who practiced Islam formed the nucleus of one of the largest Muslim communities in the United States. In 1937, this community built the Dearborn mosque. It is one of the oldest mosques in the United States and remains open to the present day.

The largest group of Muslims in Dearborn still consists of Lebanese Sunnis. Over time, their presence has been augmented by immigrants from many different areas. Some other communities with a sizable presence in Dearborn include Iraqis, Yemenis, and Palestinians. Overall, about 40,000 Muslims live in Dearborn, forming 40% of the population.

No matter what the origin, the question of reconciling the practice of Islam with American culture has never been an easy one. Women and the Hijab One of the most visible decisions is made by every woman in the community -- whether to wear the hijab. There is no consensus on this practice, and the women themselves are about evenly split. In the general public, a hijab is almost always the first thing that a Muslim woman is judged by. Reactions from non-Muslims can range from awkwardness to outright hostility, due to the perceived cultural divide. On the other hand, a woman not wearing the veil exposes herself to criticism from the conservative members of her own community, whom she frequently comes into contact with. There is no equivalent choice for a Christian woman that marks her so powerfully in the eyes of strangers.

The argument in favor of the hijab is a traditional one, based on the Qur'an. One line, for instance, states about women that, "They shall not reveal any parts of their bodies, except that which is necessary." As with most religious texts there is a level of ambiguity. Clerics have commonly interpreted verses like this to mean that a woman's hair should not be visible in public.

Increasingly, Muslim women in America have disagreed. They argue that the Qur'an simply demands that women dress modestly and not flaunt their bodies to the public eye. They also point out that the hijab is an Arab garment and a product of that culture -- not a universal garment and never mentioned in the Qur'an. While it is likely to be a contentious point for the foreseeable future, there does seem to be a gradual trend towards more women giving up the veil.

For those who view the veil as fundamental to Islam, this arouses great consternation. Sunnis, Shiites, and Politics Dearborn Muslims across the board tended to support George Bush in the 2000 election. His policies on Iraq once elected, however, divided them quickly. As with the rest of the country, the 2003 invasion was a very polarizing event in Dearborn. The Sunni community was furious. They felt betrayed by the move and saw it a misguided act of imperialism by the Bush Administration. The fact that in a new Iraq, on the balance, the power of Sunnis would be greatly reduced was also no small factor. On the other hand, the Shiite community was ecstatic. Many had relatives in Iraq or were refugees themselves, and they unanimously despised Saddam. They had been more inclined to view George H.W. Bush's non-intervention in their 1991 uprising as the true betrayal.

As the Muslim community has grown in size, the Sunni and Shiite population have split into different mosques and neighborhoods. A key event in this regard was the opening of the Islamic Center of America in 2005, which is a Shiite mosque and the largest U.S. mosque of any denomination. As the minority, Shiites claim that they are frequently ostracized and disrespected by the Sunnis. In the days before the two groups could worship separately there were arguments over the correct forms of prayer, and Shiites often would be prohibited from leading any of the proceedings.

Now when vandalism occurs, both sides are quick to blame members of the other sect. In one event, the Islam Center of America was vandalized in 2007 with anti-Shiite graffiti. In spite of this division, all Muslims could agree that the 9/11 attacks made them feel disquieted. The city became closely watched by the FBI and other counter-terrorism agencies, and men were detained and a few even deported for their connections to organizations in the Middle East. Community spokesmen and newspapers view many of these cases as unjust, while reaffirming their own commitment to the U.S.

Overall, the Dearborn community displays many of the trappings of American life. The cars, houses, and clothes look similar to those seen in other suburban communities. The teenagers strive for their independence, while parents hope that their young children will live in a more accepting culture of the future. There is a universal quality to these ambitions that mixes with the practice of Islam. The devout seek to find the proper balance, in the long tradition of American immigrants and their descendants.
Email Post
Labels: gender and religion guest posts islam Islam in America religion and terrorism religious tolerance and intolerance

Unknown said…
Very good post...well i think writing this kind of article is a tough job.Thanks for your blog.