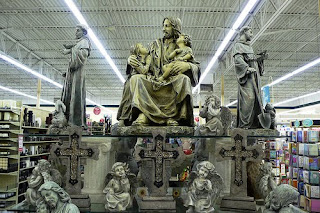 Paul Harvey said…
Charity, definitely going to submit this to the "best series of posts" category for the Cliopatria awards. And thanks for the Muzak reference, my day is now officially ruined.
November 2, 2011 at 10:00 AM

rjc said…
I've long been intrigued with the fact that the Bible has many, many passages that say not to work on the Sabbath, detailing punishments for those who ignore this injunction -- and yet, it says hardly anything about homosexuality or premarital sex or abortion. But what is it that "conservative" Christians in the US get worked up about? I'm not necessarily saying that they shouldn't get worked up about the things that they do -- just that the justification of Biblical authority for those stances has far more to do with social and cultural forces than with textural references.
November 2, 2011 at 10:48 AM

Bryan Kessler said…
I have thoroughly enjoyed this series, aside from the thought that this required you working under such circumstances and that your coworkers are stuck there. The stories are harrowing yet fascinating.

While Retail X was obviously an overt Christian store, many of the practices you talk about (i.e. praying before meetings) seem just as likely at other Christian-based businesses, such as Chick-fil-A. I wonder how similar the behind-the-scenes culture is at a more "professional" and public business that gets a lot of play out of its Christian trappings.
November 2, 2011 at 9:44 PM

Charity Carney said…
Thanks, all, for your comments so far. I'm glad the series was successful. Is it time for the big reveal?... Maybe I'll wait until Deg is finished with his commentary. Teasing until the end... that's me. :)
November 2, 2011 at 10:43 PM

Chris Price said…
Very interesting experience. Sadly, not surprising. It's a shame that people try to profit excessively because of an employee's belief in a calling. I'm personally working on a puritan historiography. I've read a couple of recent books (Margo Todd on Christian Humanism and Mark Valerie on Early Boston) that indicate that the early puritans (ministers, anyway) were more concerned with the good of the community than with the profits of the merchant. Interesting change in motives...
November 4, 2011 at 9:59 PM

Chris Price said…
Interesting stuff...profits over people...imagine that. A couple of interesting books I've read recently are Margo Todd's Christian Humanism and the Puritan Social Order and Mark Valeri's Heavenly Merchandize. The original puritans had more concern for the commonwealth than for the merchants. Today, the attitude among many is the exact opposite.
November 4, 2011 at 10:02 PM