Skip to main content
Labels
Posted by Cushwa Center for the Study of American Catholicism November 21, 2017

Religion and the World War I Centennial 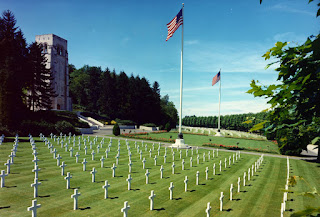 From 2011 to 2015, historians of the Civil War occupied an enviable position: they had four long years to enjoy the 150th anniversary of the conflict, with a spate of monograph publications, conferences, and other academic events scheduled to commemorate the sesquicentennial.  Now, from 2017 to 2018, we are in the midst of another anniversary: the centennial of the United States's involvement in World War I.  From April 1917, when Congress declared war at President Woodrow Wilson's request, to November 1918, when a cease-fire was signed, the United States sent millions of soldiers (not to mention nurses, chaplains, and other personnel) to Europe in an effort that eventually turned the tide of the war in favor of the allies.  Without question, the Great War and the 1919 Treaty of Versailles set in motion forces that would culminate in, to use historian Modris Eksteins's phrase, "the birth of the modern age."

Until recently, however, relatively little attention has been paid to the role of religion in the conflict.  This post aims for a very quick overview of some of the recent literature concerning religion and World War I, with an emphasis on the American side of things.  The post is suggestive rather than exhaustive; please feel free to add other texts in the "comments" section.


For a long time, only a few books dealt extensively with the subject of religion and the Great War.  The first real attempt, Ray H. Abrams's Preachers Present Arms (1933) marshalled a mountain of evidence in support of a "social control" thesis; in his view, ministers supportive of the war were both victims of the Wilson administration's propaganda and conduits of it.  John F. Piper, Jr.'s The American Churches in World War I (1985) was a rebuttal to Abrams; Piper attempted to show that most clergymen were justified and relatively restrained in their patriotism.  The next substantial treatment, Richard Gamble's The War for Righteousness (2003), stressed the ways that the New Theology and the Social Gospel motivated liberal Protestants to back the war as a progressive, ameliorative measure.

Since Gamble's revision, other works have also tackled the subject of American religion and World War I, but from different angles.  Jonathan H. Ebel's Faith in the Fight (2010) shifts the discussion away from elite clergymen toward ordinary soldiers.  With impressive use of private sources like letters as well as public ones like the Stars and Stripes newspaper (the official publication of the American Expeditionary Force), Ebel shows that ordinary doughboys often echoed conventional religious justifications for the conflict.  Other studies situate US religious support for the war in a wider context.  Ebel's most recent book, G.I. Messiahs (2015), for example, begins an examination of the soldier as a religious image in the twentieth century with a chapter on World War I.  Likewise, Andrew Preston's magisterial Sword of the Spirit, Shield of Faith (2012) situates religious support for World War I in the longer perspective of the interplay between faith and foreign policy throughout all of American history.  In The Great and Holy War (2014), Philip Jenkins puts the American religious story in a global context; Jenkins demonstrates that figures from most of the nations involved in the war argued that the Almighty was really backing their cause.

The most recent literature on this topic has helped to fill in the picture more completely.  RiAH's own Cara Burnidge's A Peaceful Conquest (2016) revisits the issue of Christianity and the Great War, but from a different perspective.  Burnidge focuses on Woodrow Wilson's own serious religiosity in an account that fuses intellectual, political, diplomatic, and religious history.  Gordon Heath's edited volume, American Churches and the First World War (2016) is a boon to scholars since its chapters cover how a range of denominations dealt with the war.  Familiar categories like "evangelicals" and "Catholics" appear, but these are supplemented by chapters dealing with groups as diverse as Quakers, Lutherans, Mormons, and Jehovah's Witnesses.

British, Canadian, and German religious experiences in the war have recently been chronicled as well. Edward Madigan's Faith Under Fire (2011) explores the experiences of Anglican chaplains; Madigan and M.F. Snape's The Clergy in Khaki (2013) gathers a range of authors to deal with the British chaplaincy; and Mark D. Chapman's Theology at War and Peace (2016) examines how English theologians dealt with Germany in the Great War.  Like his American volume, Gordon Heath's edited collection, Canadian Churches and the First World War (2014), covers a spectrum of Christian denominations.  For the German scene, consult Lea Herberg's edited volume, Theologie im Kontext des Ersten Weltkriegs (2016) and the latter half of Gunter Brakelmann's Deutscher Protestantismus in den Kriegen 1870/71 und 1914-1918 (2014).  For a global overview of religion and the Great War, German readers can peruse Martin Greschat's Der Erste Weltkrieg und die Christenheit (2014).

There are doubtless many conferences and events planned to commemorate the World War I centennial.  I will end by highlighting one such conference, to be held at my alma mater.  The Center for Vision & Values at Grove City College (PA) will host "World War I and the Shaping of the Modern World" from April 12-13, 2018.  While panelists will address a variety of sub-topics, religion is sure to feature prominently.  Click on the hyperlink to find out more information and register.

As mentioned earlier, feel free to add other recent studies or relevant upcoming conferences, symposia, etc. in the comments section!