Is there such a thing as working class religion?

Is there such a thing as working-class religion? 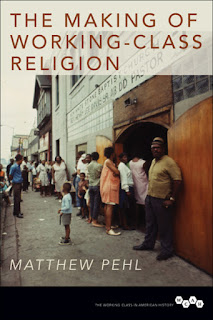 In his recent book, The Making of Working Class Religion, Matthew Pehl argues that there is such a thing. For Pehl, "worker religion," is a pattern of idioms and symbols that are co-constituted in the workplace and in religious communities. When we assess working people's religious experiences through the category of "working class religion" (rather than "faith" or "belief," which differ by tradition), we come to see the ways that Catholics, Protestants and Jewish workers had common experiences which informed their religious identities. That is, Pehl argues, workers experienced class through their religion, and religion through their class. The one category cannot be understood without recognizing the way the other category helped constitute it.

How does this theory impact the way we read the history of the working classes in Detroit?

According to Pehl, it was partially religion that brought workers into the labor movement and kept them there. White, ethnic Catholic workers came together under iconography that celebrated Christ-the-worker. Black Protestant migrants from the South came together under Southern idioms and cultural symbols that deeply connected with agricultural work and Southern religion.... Pehl convincingly argues was not just workers who were organized by the UAW, but whole working class religious groups which the United Auto Workers shaped and was ultimately shaped by. Their balance of left-wing but not Communist politics, for example, was deeply shaped by the Detroit Archdiocese. The Detroit Archdiocese, however, was also deeply shaped by the number of Catholic workers in Detroit.

When the heyday of the Detroit UAW fell (with the automation of the car industry and the de-industrialization of Detroit), so also did the heyday of "worker religion." Class-based religious consciousness, held together in large part through the UAW and the common experience of the shop floor, fragmented in the 1960s. As large number of working class whites left the city for white collar jobs and the suburbs, Detroit's religious consciousness was remade along the lines of race rather than class.

The book balances theory and social history extremely well. I would highly recommend it for any class in Religious Studies or Working Class History. 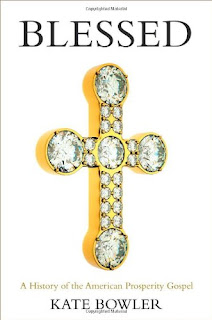 For a critical discussion of the book, however, I'd love to assign this book alongside Kate Bowler's Blessed: A History of the American Prosperity Gospel. Both books are fantastically well-written, but they each address poverty and the prosperity gospel/ Word of Faith movement of the 1930s through a very different lens. Bowler addresses the role of class and material conditions of poverty in the rise of the movement, but for her, the 1930s was a moment of impossibilist prayers for scarce material blessings. For Pehl, however, the 1930s was a moment of profound gains for labor due to the very "working class religion" that the 1930s produced.  Of course, part of the discrepancy is the fact that the two historians focus upon different regions of the country. Poor Americans in the rural South, of course, experienced the Depression differently from the employed working classes in Detroit. However, the two books trace the origins and effects of the Word of Faith movement pretty differently.

For Bowler, the Word of Faith movement is not really a class phenomenon; it is an American phenomenon. It is little more a response to poverty than a response to an American culture which fetishizes health and wealth, and an American Christianity which has historically accomodated those cultural values. For Pehl, however, that desire for material prosperity which led to the Word-of-Faith movement in the 1930s needs to be read primarily as function of Detroit's social history. The Word of Faith movement in Detroit, Pehl suggests, arose only because of the way it brought together the collective histories of Detroit's working class Protestants. Pehl challenges us to trace all religious beliefs as a outgrowth of specific, class and material conditions.

Overall, I'm very excited about the flowering of new scholarship on religion in the Great Depression. Alison Greene's No Depression in Heaven speaks to these subjects as well, but for that we'll have to wait until next month.