Skip to main content
Labels
Posted by Cushwa Center for the Study of American Catholicism March 21, 2017

While admittedly sometimes the very last thing I want is more sources -- there are so many sources, I lament as I trim redundant quotes out of my current manuscript -- I also can't help but be excited by how many digitization projects are out there. One with incredible potential, I think, is the Catholic News Archive, a project of the Catholic Research Resources Alliance.


The CRRA has been working on preliminaries for this archive since 2011. Some helpful history and background on all their work is here. They've identified a list of diocesan and national Catholic papers as "priority papers" for their own digitizing. Fundraising is ongoing, but they've been able to open a test site for the archive, which is already really useful even though there are only seven titles; one of them is the National Catholic Reporter, and another is the Catholic News Service feeds.

As a bonus, the CRRA has been compiling links to other Catholic papers available online elsewhere. There's a cool interactive map: 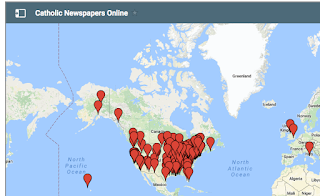 It's hard for me to overstate my level of excitement about the possibilities here as the archive grows. Individual papers will be a critical resource for those wishing to write specifically on (say) Miami or San Francisco, but an entire collection of representative dioceses and national news sources makes it possible to engage in larger comparative research. I spent an hour this afternoon collecting mentions of "experimentation" for an article I'm developing--work I would have spent a week or two on using microfilm.

Just thinking about the Vatican II era which the CRRA is currently seeking grants for, a number of potential projects come immediately to mind. Searchable access to these papers would shed significant light on local and national American Catholic responses to the Cold War, to the Vietnam War (including the foundations of the peace movement which played an important role during the 1970s and 1980s), to civil rights, and to increasing immigration from Mexico, the Philippines, Vietnam, and other countries in the aftermath of the 1965 immigration bill. Diocesan papers, despite their often "official" tone, contain critical information on diocesan and parish activities around these and other issues, while the National Catholic Reporter made these issues its "beat" and provides granular coverage. These papers also contain coverage of important and understudied national stories; for example, the way in which Catholic sisters both transformed and were transformed by the women's movement has yet to be fully explored, and the digitization of local and national papers would provide amazing data. And of course these papers, despite their origin in committed Catholic groups, don't need to serve as a resource only for 'celebratory' scholarship. We could look for topics not covered, including those of critical interest today like homosexuality, birth control, divorce, and, of course, sexual abuse. Digital access to these papers makes these primary sources readily available to scholars of social, economic, political, and other histories as well, opening up opportunities not only with Catholic history but within American (and even global) history as a whole. It will enrich these projects in a way which would be impossible if scholars whose primary area was not religion had to travel to a specialized library in order to use microfilm of rare diocesan newspapers.