Today's guest post comes from Dave Krueger, an independent scholar of American religious history. He is the author of Myths of the Rune Stone: Viking Martyrs and the Birthplace of America and is currently working on an article about the history of Muslims in Philadelphia. Connect with him via his website or on Twitter at davidkrueger01.

Philadelphia is a great place to people watch, particularly for scholars like me with an interest in material expressions of religion. Whenever I take a walk down 52nd Street in my West Philly neighborhood, I’m intrigued by the fashion choices that people make. At the edge of the University City district, I will occasionally see white hipsters in tight jeans riding fixie bikes, but on this street, it is more typical to see African Americans donning apparel that is typically recognized as “Islamic.” 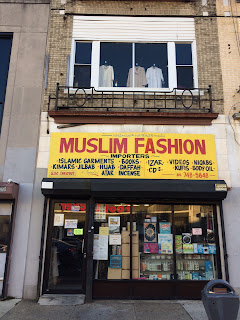 Some women wear colorful hijabs (headscarves) covering their hair, while others wear black niqabs that cover the face and abayas that cover all but the hands. Some men wear kufis (skull caps) on their heads and beards of varying lengths – sometimes dyed with a reddish tint. Some men wear kifayas (scarves) and thobs (long, ankle-length shirts) that are common in the Middle East, and others don vest coats and izzars (skirts) that are typical in South Asia. At times, a stroll down 52nd Street can feel like a visit to Lahore or to Riyadh. However, the nearly ubiquitous inclusion of Timberland boots reminds me that that I’m walking down the streets of an American city.

What can a study of these eclectic assemblages of apparel and adornment teach us about Muslim life in the U.S.? In the Middle East, a kifaya is used to shelter oneself from the sun, but what utility does it have on a cold winter day in West Philly? Does the wearer use it differentiate himself from his Christian and non-religious neighbors? Does it signify that he is a certain kind of Muslim, perhaps one who embraces a stricter, and perhaps, more “authentic” expression of Islam? Is the donning of a kifaya a way to protest American racism by identifying with a post-colonial aesthetic? What role do the Timberland boots play? Are they worn simply for comfort, or does the wearer use them to project a distinctly Islamic masculinity?

As has been noted in a previous post on this blog, clothing matters. That is why a few of us are organizing a new seminar at the American Academy of Religion that is titled Religion, Attire, and Adornment in North America. Here is the seminar’s statement of purpose:


Focusing on the North American context, this seminar explores specific instances of religion, attire, and adornment, as well as theoretical and methodological approaches to the study of religion and dress. Religion and dress includes a wide range of expressions, including not only clothing but all forms of bodily adornment: hairstyle, jewelry, cosmetics, scents, bathing, tattooing, and more. Many religions prescribe and proscribe various forms of dress in both sacred and secular settings, but beyond basic questions of who, what, and why that are prompted by such religious rules, this seminar is especially interested in exploring connections between religious dress and meaning-making. We also seek to move beyond dress as merely a sign or communicator of meaning to attend to the materiality of dress itself, and the ways it shapes bodies and selves. All scholars are invited to contact the chair to express interest in participating in the seminar.

There are already many good sources that consider the relationship between religion, attire, and adornment: Martha Finch’s Dissenting Bodies: Corporealities in Early New England, Lynn Neal’s Material Religion essay “The Ideal Democratic Apparel: T-Shirts, Religious Tolerance, and the Clothing of Democracy,” and Sally Dwyer-McNulty’s Common Threads: A Cultural History of Clothing in American Catholicism are just a few examples. As I’m beginning to research Muslim men’s fashion in Philadelphia, I have particularly enjoyed Su’ad Abdul Khabeer’s new book Muslim Cool: Race, Religion, and Hip Hop in the United States. You can listen to my podcast interview with Su’ad at the Marginalia Review of Books. The new seminar aims to build on this great scholarship. Please consider joining us!

To find out more, please visit the call for papers page at the AAR website and send an email to the seminar chair Marie Dallam at mwdallam@ou.edu.
Email Post
Labels: AAR clothes clothing islam Islam in America religion and attire