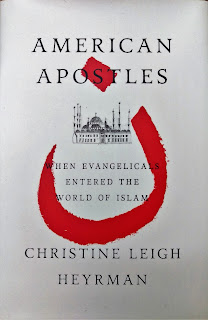 I recently received a copy of Christine Leigh Heyrman’s newest book, American Apostles: When Evangelicals Entered the World of Islam, which came out late last year with Hill and Wang publishers. Most readers of this blog will likely be familiar with Heyrman's previous Bancroft Prize-winning work, Southern Cross: The Beginnings of the Bible Belt, so I thought I might share a review of her new monograph here.

American Apostles tells the fascinating tale of three American evangelical missionaries—Pliny Fisk, Levi Parsons, and Jonas King—who left their New England homes to spread the Christian Gospel throughout the Middle East during the early 19th century. As these founding members of the “Palestine Mission” traveled through Ottoman Turkey and the Levant, they chronicled their encounters with Muslims, as well as Jews, Catholics, and other Middle Eastern Christians, eager to gather information about the Middle East, its peoples, and its religions. Fisk, Parsons, and King sent these accounts back to the Boston-based American Board of Commissioners for Foreign Missions (ABCFM) for publication in newspapers and Christian periodicals in the United States. In addition to their official journals, each man also kept private diaries. Heyrman notes that archivists have only recently managed to find the full body of Fisk’s private writings, and her incorporation of these documents allows her to examine the story of the Palestine Mission anew. Her careful reading of these diaries, and the information these diaries captured that the official journals omitted, reveals how each of these men encountered Islam, how they “invented” and reinvented Islam for their American audiences through their descriptions of these encounters, and how they reshaped and redefined evangelicalism in the process. (16).


Heyrman opens the book with the story of Pliny Fisk and Levi Parson’s coming of age as adherents to the New Divinity, a theologically conservative evangelical subculture that flourished in parts of Connecticut and Massachusetts in the early Republic. Those who embraced New Divinity beliefs railed against the theological liberalism of the Unitarians, deists, and many non-evangelical Protestants that populated New England in the early nineteenth century. They also devoted themselves fervently to world missions, founding the ABCFM in 1810 and then proliferating foreign missions as rapidly and as widely as possible in the years that followed. (22). New Divinity believers sought to convert the world to their faith because they believed that “there could be no salvation without faith in Jesus…so the eternal outcome would be grim for those who died still deluded by Islam or Hinduism, paganism or unbelief.” (35). As Heyrman notes, "promoters of missions…affirmed Enlightenment universalism: the belief that human nature is the same everywhere. (The correlate was that everyone, the world over, would learn to embrace evangelical Protestantism along with the other practices of a clearly superior Anglo-American civilization.)" (33). Fisk and Parsons certainly internalized these ideas, and set their sights on evangelizing the Middle East even before they finished their studies at the Andover Theological Seminary.

Muslims represented a significant un-evangelized population to reach, but their vast numbers—not to mention the large populations pagans, Jews, Roman Catholics, and Eastern Christians—raised an unsettling question for these missionaries, one that Heyrman comes back to throughout the book: “If theirs [meaning evangelical Protestantism] was the superior religion, why were their ranks so small?” (35). Many New Divinity members, including the young Fisk and Parsons, believed that Islam had gained its predominance because “military conquest and forced conversions had spread Muhammad’s faith, and its hold had endured through both the ruthlessness of rulers and the ignorance of their subjects.” (36). Yet, as Heyrman reveals, when Fisk and Parsons began attending Andover, they encountered the writings of George Sales, who had published a translation of the Qur'an into English in 1734 that dismissed Islam yet provided a learned refutation of many falsehoods about the religion, including the idea that Islam had only spread through force. (37-38). Furthermore, a number of Orientalist scholars lauded Islam for its rationalism, a view that galled many evangelicals. (49). Despite their dogged conviction that Christianity represented the one true faith, as Fisk and Parsons traveled through the Middle East learning about Islam, the knowledge they gained led them to question much of what they thought they knew, not only about Islam but about the evangelical enterprise as well.

The book centers on Fisk’s story, with Parsons and King playing supporting roles, and Heyrman follows his movements throughout the Middle East as he met Muslims, worked to distribute religious tracts (New Divinity members believed in the power of the printed word to bring conversions, despite the largely illiterate populace), and learned the local languages. Yet Heyrman does not limit herself just to the diaries of Fisk, Parsons, and King—indeed, she expands the cast of characters by including the other Western missionaries working in the Levant, as well as Western converts to Islam, that the three men encountered in their travels. One of these men, an American convert to Islam named George Bethune English, caused Fisk considerable concern. Heyrman describes Fisk traveling across the region in pursuit of an audience with English, in part because English’s "career so starkly defied [Fisk's] expectations—and the entire premise of the missions movement—that greater knowledge of the world's religions would turn pagans, Jews, and Muslims into evangelical Protestants. English's spiritual pilgrimage, to say nothing of those made by other once-Christian renegades, attested instead to Islam's appeal." (180-81). As Fisk and others discovered on their journeys throughout the Middle East, “Muhammad's teachings won [wide] assent not, as Western Christians had long insisted, because of the blind allegiance bred by custom or beckoned by lust but because the Prophet's creed satisfied the demands of a well-honed critical intelligence." (107). Fisk’s conversations with Muslim scholars and the Muslims who taught him Arabic and the basics of the Islamic faith bore this out. This revelation initially deflated some of these missionaries, leading them to question whether the mission could succeed (especially since that they could not preach directly to Muslims and given that Muslims faced dire consequences for leaving their religion). Most, including Fisk and King, quickly recovered their commitment. Yet Fisk began keeping more and more information about his Muslim acquaintances to himself, confined to his private diary rather than committed to his official journals.

For Heyrman, the missionaries’ realizations about Islam illuminates several key aspects of early 19th century evangelicalism. First, the way that Fisk, King, and others wrote about Islam revealed much about the religious anxieties of the period. Since Islam clearly attracted adherents through its rationalism, many missionaries related it to threatening rival religions at home, such as Unitarianism. According to Heyrman, by relating these religions, missionary writings rendered Islam “as a form of religious rationalism,” and "this invention marked only the latest, but not the last, chapter in a long history of Western Christians remodeling Islam to mirror their own immediate religious anxieties and casting Muslims in the image of heretics and unorthodox Christians closer to home." (182-83). Second, King’s writings in particular reflected the gender-based anxieties of American evangelicals. Fisk, Parsons, and King were astounded to discover the depth of Muslim men’s devotion to their faith, especially given the low level of piety among American Christian men (in comparison especially to the piety of evangelical women). Unlike earlier chroniclers who depicted Muslim men as effeminate, King’s accounts created a hyper-masculine Islam, portraying Muslim men “as inspiring a mixture of fear and envy, awe and emulation,” and portraying himself as a “new model of evangelical masculinity, one whose attributes went beyond restrain and respectability, piety and probity, to include physical prowess, fearlessness, and daring” and one who would spread republican and Christian virtues across the world. (228). Finally, she also reveals how and why Fisk self-censored his reports. In her conclusion, Heyrman notes that “the foreign missions movement created in Fisk a knowledgeable observer of Muslim beliefs and practices. . . . His reports from the Middle East over many years might have. . .challeng[ed] caricatures of Islam as a religion of ignorance and intolerance. There might have been more missionaries who followed Fisk's lead, and the evangelical movement might have become a great source for imparting accurate information about Islam and the ground shared by all the world’s great monotheisms to a vast audience.” (249). Yet he withheld much of this information, partly because he understood what his audience expected and what his ABCFM sponsors would publish. Anxieties about the missionary enterprise—and fears that Islam might overtake Christianity—required missionary chroniclers to depict Islam in a particular way to ensure steady contributions from American donors to support the mission. He wanted to set the Palestine Mission up for eventual success in the region, not undermine it. King had an instinctive sense for this, hence his more exaggerated creations. And, as Heyrman notes, it was King whose inventions of Islam tended to win the day, in part because he succeeded Fisk as the leading American missionary in the region after Fisk’s death.

American Apostles is a diverting read. The narrative is lively and descriptive and Heyrman seems to have written it with a broad audience in mind. Since she tells much of the story of the mission itself through the eyes (or words) of Fisk and his direct experiences on the ground, it is easy to get lost in the story, as well as the sights and sounds Fisk describes in his journals. Heyrman’s core arguments about early Republic-era evangelicalism come through and are well supported by the evidence she presents. I have a minor complaint about the use of slang and colloquialisms in some parts of the book, which I felt were anachronistic and broke the flow of the narrative (though there were just a few such terms or phrases scattered throughout the book and thus I could generally overlook it), but this does not in any way detract from the valuable contribution this book makes to the growing literature on how U.S. evangelicals operated and interacted with the wider world. American Apostles provides an important addition to our understanding of the motivations that undergirded early American evangelical missions, complementing other excellent recent work such as Emily Conroy-Krutz’s Christian Imperialism: Converting the World in the Early American Republic and offering new insight into the Palestine Mission.
Email Post
Labels: 19th Century book reviews evangelicals islam Lauren Turek's posts missionaries