Not How High but How Close

This is the fourth post in a series commemorating the twentieth anniversary of John McGreevy's book Parish Boundaries. The post comes from Wallace Best, a professor of religion and African American studies at Princeton University. The author of Passionately Human, No Less Divine (2007), Best has also completed a religious biography of poet Langston Hughes. 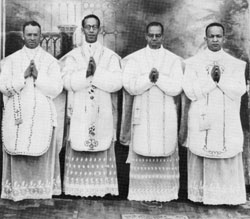 I have two confessions to make.  First, I wrote a dissertation and book about black southern migrants in Chicago and only mentioned “black Catholics” once – briefly and in passing.  When called upon this late in my research and writing 1990s, I justified it by saying – “they have their own story.  The story I’m writing is a Protestant story, and I couldn’t do justice to the one about Catholics.”  I was dodging, of course, but I was also convinced that I was correct.  Second confession, I did not read John McGreevy’s magisterial Parish Boundaries carefully enough as a graduate student.  I realize now that had I read it closely enough, I would have noted some crucial and critical thematic intersections, and it would have enhanced and perhaps reshaped some of my own assertions about black Chicago in the early decades of the twentieth century.

I have the opportunity now to note some of those intersections with regard to the issues facing black southerners in Chicago during this period and to think about what ways a more careful reading would have enhanced my work on Chicago in particular and how it has shaped how I now think generally about black religion in urban contexts.


The first intersection has to do with role race, place, and space play in the book.  This interrelationship is perhaps one of the most crucial aspects of Parish Boundaries, as it emphatically underscores how the places (brick and stone) and spaces (the regions of everyday lived experiences) of Catholics were or became racially contested locales.  This was precisely the impact of the “influx” of black southern migrants to Chicago during the Great Migration.  Their presence made much of Chicago’s South Side “contested terrain” and increasingly “racialized space.”  The story of white Catholics’ attempts to retain the racial and religious make up of their neighborhoods is counterpart to the story of black Chicagoans’ attempts to find neighborhoods in which to belong.  The issue of this interrelationship develops from one of the primary arguments in Parish Boundaries, which questions why we look to the workplace and not the home as the source of urban unrest and racial tension, given that most urban sites of racial conflict have not been over public accommodations but over neighborhoods and housing.  Northern white Catholics were not bothered by individual racial progress in the workplace and other arenas of life.  They worried about proximity.  And it was this resistance to a black presence in Catholic neighborhoods that reminded me of the old maxim that applies to both our studies:  “In the South, they (whites) don’t care how close you live, but how high you get.  In the North, they (whites) don’t care how high you get, but how close you live.” 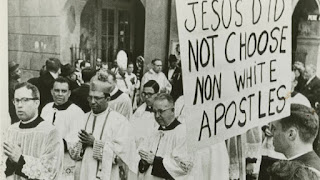 The second thematic intersection has to with the emphasis on religion and the construction of identity.  As McGreevy states,  “a central claim of this book is that American Catholics frequently defined their surroundings in religious terms.” Parish Boundaries underscores in dramatic ways that religion is and has always been central in the construction of identity and community in the urban context.  All studies of urban communities now acknowledge this in one way or the other because Parish Boundaries has made it impossible and certainly unacceptable not to.  In the same way, most studies of migration now acknowledge that religion was central to and perhaps even provided some key motivation for the demographic shift, as I tried to show in my book.  While race, gender, class, and ethnicity were crucial to the construction of identity and community in the twentieth century, religion was just as crucial, perhaps even more so.  At McGreevy’s urging urban historians now “Tak[e] religion seriously.”

Another point of intersection in our studies was summed up by one Jesuit observer regarding the rapidly transforming Catholic Church McGreevy revealed in Parish Boundaries.  He noted, “the changing Church in the changing city.”  The story of Parish Boundaries is a story of broad transformations within urban American culture and the consequent and requisite changes the Catholic Church that to make in light of those transformations.  Or, the resistance to those changes resulting in “two moral languages” which challenged each other “for religious and cultural recognition.”  This involved the Church’s awakening to social issues as the work of the church.  The migration of blacks to cities also generated challenges for American churches, Protestant and Catholic.  Changes that were, in essence, about the fundamental nature of the Church and of church work.

As historical studies, Parish Boundaries and my own work attempt to document change over time.  But those changes were not just to church culture, governance, and racial policies, but also at the core changes in conceptions of the place of church in the lives of city inhabitants, and ultimately changes in conceptions of the very nature of religion. A more careful reading of Parish Boundaries during graduate school and after would have balanced my emphasis on culture with politics. In my effort to showcase the broad cultural changes in Chicago and Chicago’s black churches with regard to music, preaching styles, architectures, and styles of church life, I neglected a focus on politics and the political implications of those changes.  Parish Boundaries masterfully does both. 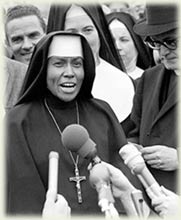 I would have also discovered that rich and vibrant black Catholicism that was there all along, existing side by side with my black Protestants on the South Side.  And now new studies like the one done by Matthew Cressler are beautifully filling in the historical gap I dodged.  At the same time, I would also have gotten some answers to my questions as to why there were relatively so few blacks who were Catholic.  McGreevy roots this in the anti-Catholicism of the South.  But he also hints at other forces that prevented more blacks from becoming Catholic: worship patterns, historical memory,  and other lived religious matters. And this is perhaps another factor to consider in questioning why Protestantism has loomed so large in the black religious imaginary.  I always think of “Mammy,” Hattie McDaniel’s character in Gone with the Wind.  Even though a Catholic family owned her, the portrayal of her faith in the film was decidedly Protestant seemingly rendering the portrayal of a black Catholic untenable.

Lastly, there was much to learn about “the Parish” and “the neighborhood.”  As McGreevy so convincing shows, there were key differences in the way black southern migrants and white Catholic communities constructed and formed each of these.  One of those is that white Catholics connected their lives to the parish, which sat at the center of the neighborhood.  “Belonging” to the Parish was a type of “belonging” period.  Black southern migrants did not necessarily connect place/space to identity.  The relationship to the space/place was always fraught.  “Getting out” was a more potent force than “staying in.”  And this “parochial” not “universal” impulse among white Catholics was the means by which they expressed patriotism and reinforced alignment with the nation.

Parish Boundaries is replete with brilliant insights and takeaways that will continue to shape my thinking.   Given the current political and religious climate, however, I found the accounts of Catholic racism in the text hard to read.  The often-unrelenting assault on black life and bodies from religious persons was exhausting and maddening.  But McGreevy warned us early. “The story is alternatively hopeful and discouraging.” I was reminded that racism can be “thoughtless” and cruel, but sometimes racists think that they have a great deal at stake.  So, denying a place in one’s neighborhood at the expense of one’s morality and the authority of the church accentuated the very high stakes.  The central concern for white Catholics in urban American during the twentieth century was not how high backs got but how close they lived because their very lives and conceptions of themselves and their communities were at stake.  In this way, however, African Americans that we confront in Parish Boundaries had to live in a world between perception and reality, where perception was almost always stronger than reality.

So, having now done a more careful reading the book, I have concluded that the story of white Catholics in Chicago and that of black southern migrants were, in fact,  “different stories,” as I claimed.  But at the same time, it is the same story of massive neighborhood transformation and identity formation with all the attending tensions and consequences for how people actually constructed their lives and livelihoods.