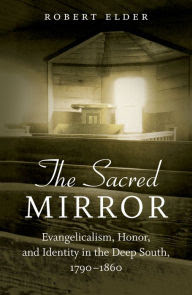 Robert Elder is an assistant professor of history at Valparaiso University. His research focuses on the cultural and religious history of the South in the 19th century. I interviewed him about his recently released book, The Sacred Mirror: Evangelicalism, Identity, and Honor in the American South, published with the University of North Carolina Press (2016). He is now working on a book about John C. Calhoun. Next year he will serve as the University Research Professor at Valparaiso as he works on his new project!

RE: Several really great histories of southern evangelicalism over the last couple decades have contained this narrative of a pristine early southern evangelicalism that challenged slavery and honor culture only to accommodate and eventually defend them in the antebellum period. Most of the radical potential that historians have seen in early evangelicalism stems from the more individualistic and autonomous ways of constructing the self that evangelicalism represented (this was the connection between its challenge to slavery and its challenge to patriarchy). It’s a powerful narrative arc, but I think this narrative has obscured the ways that early southern evangelicals were deeply rooted in the cultural assumptions of their world, and consequently it has obscured the much more complex ways that honor and evangelicalism interacted in the South throughout this period. I originally studied honor, and instead of how evangelicalism sold out to southern culture I was interested how the language, structure, and assumptions of evangelicalism might have resonated with southerners from the very beginning. In the earliest stages of the project I was influenced by the old Marxist critic Raymond Williams, who described what he called “oppositional” and “alternative” movements within a dominant culture. According to Williams, oppositional describes “someone who finds a different way to live and wants to change society in its light,” while alternative forms of culture describe movements that cause real disagreement but do not “in practice go beyond the limits of the central effective and dominant definitions.” My argument would be that, culturally speaking, southern evangelicalism was always more the latter than the former.

PC: How does the historian deal with the concept of “honor?” What approach did you take?

RE: Honor is a little like evangelicalism in the sense that they both defy easy definition! I came to this project having been inspired by Bertram Wyatt-Brown’s Southern Honor (1982), and I noticed early on that most histories of southern evangelicalism used a very narrow definition of honor that associated it with temperament and behavior (dueling, fighting, sensitivity to insults or challenge, etc.). Wyatt-Brown, drawing on anthropologists, had a much more capacious definition of honor as an entire ethical system. The key to connecting all the different facets of honor and to understanding it as an ethical system is to understand that honor cultures are cultures in which individual identity is largely dependent on and determined by communal authority and opinion. That’s the definition that I argue for in the book, and it’s the best way to understand how certain evangelical practices, like church discipline, could be incredibly powerful in the context of southern culture. It’s also really important to understand that honor has a religious component to it in the sense that it involves notions of the sacred and profane (i.e. honor could be “stained,” requiring expiatory violence), and rituals for how to navigate the boundaries between those two categories.

PC: How did early modern notions of community contrast with the ‘modern self?’ You argue throughout your book that evangelicalism from the American Revolution to the Civil War had elements of both. In the epilogue you note that the ‘modern self’ eventually won out. But you make the case that we need to recover the moment (1790-1860) when the two existed in tandem.

RE: I definitely see my work as a kind of exploration in a specific historical and cultural location of the arguments that scholars like Charles Taylor have made about the emergence of the modern self, especially the emphasis on personal knowledge as the only true knowledge and the anchor of identity. I argue that southern evangelicalism nurtured both an individualistic sense of the self, as evidenced by its emphasis on conversion, AND a deeply rooted respect for communal authority that is clearly evident, for instance, in church disciplinary records. The tension for early southern converts was not, or not only, individual identity vs. community and family, but which community should serve as the community of authority in their lives. That’s very different from our usual notion of evangelicalism as the religious mode of modernity. Here I’ve certainly been influenced by Bruce Hindmarsh’s work on evangelicalism in early modern England, and in some ways I see my work as an extension in space and time of his wonderful book The Evangelical Conversion Narrative (Oxford, 2005).

PC: Why did you choose the conceptual device of a mirror as a way to describe the phenomenon you study? Did this definition come from the primary sources? How did your use of theoretical work – sociology of religion, philosophy, and gender analysis – help you to think of this phenomenon as a mirror?

RE: The image of a mirror came from anthropological descriptions of how honor works: that an individual’s claims about himself or herself are constantly mirrored back by the community. The individual is, in a sense, dependent on the community for her identity. I found a striking parallel to this in the way that evangelicals, especially the Baptists, practiced church discipline. Disciplinary cases began with an accusation, followed by either confession and repentance, vindication, or excommunication. What was at stake was technically membership, but really it was a communal verdict on an individual’s claim to be a Christian. Excommunications were read out publicly from the pulpit. The Baptists practiced discipline in front of the whole congregation, which made the implications for honor and shame inescapable.

PC: I found your chapter on church discipline particularly rich (chapter 2). Indeed, church discipline is a key theme of your book. How did studying the reactions of evangelical communities to drunkenness, fiddling, dancing, and ‘transfer requests’ help you to conclude that the evangelical self had considerable early modern (i.e., communal) characteristics?

RE: What intrigued me were the reactions of people accused of wrongdoing in these church disciplinary cases. These churches had no civil authority, so in some ways you would expect people to take these cases lightly, or even ignore them. But for most of this period they clearly took them very seriously. People showed up to their trials to passionately defend themselves, or, even more remarkably, to confess and repent (which seems antithetical to honor unless you understand the weight that communal consensus held). If you understand the extent to which communal authority and opinion were important to these people, and that these churches represented an institutional representation of communal opinion that was very powerful in an honor culture, you can begin to understand these reactions. It’s when people begin to ignore the church’s verdicts, or more accurately when the church becomes uncertain about imposing them, as they do regarding dancing beginning in the 1840s, that you can sense something changing.

PC: In chapter 2 and elsewhere in the book you make use of church records. What do these sources tell us? Tell the blog about some of your favorite primary sources.

BE: In South Carolina, I used some records from a WPA project that sent people all over the state to transcribe church record books, many of which are now lost. I also used original church record books, which made me incredibly grateful for the rare church clerk with good handwriting! Other scholars, like Gregory Wills, have done amazing statistical work with these records, and some, like Jeff Forret, have used them to study slavery. For me, they provide perhaps the best window we have into non-elite culture in the South before the Civil War. In some ways, it’s the last place you’d go looking for evidence of honor culture, but they ended up being an incredibly rich source.

PC: You argue that we should understand preaching as a way for a Southern man to gain honor. We should consider it, in some ways, in a similar vein as sports, horseback riding, and playing cards. It was a way of, as you put it, “mastering the self.”  How does making the connection between honor and preaching change our understanding of the rise of evangelicalism in the South and honor culture in general?

BE: It requires a broader understanding of honor and its influence than I think historians studying evangelicalism have typically employed, but it helps to explain evangelicalism’s success. The connection between the ability to speak well in public and honor was an important part of the public culture of the South, so from very early on evangelical clergy were able to claim a place as public orators in both religious and civic settings. In Charleston, the Society of the Cincinnati asked the Baptist Richard Furman to give speeches after George Washington’s death and on the Fourth of July in 1802. They asked him instead of the numerous Episcopal clergymen in Charleston at the time because he was recognized as a better orator. The idea of public speaking as a contest in which the orator tried to master his audience also helps to explain the sometimes violent reactions of audiences to evangelical preaching. They realized that the preacher was trying to “master” them. What’s been less recognized is that evangelicals understood it this way, too.

PC: I wondered throughout, as many readers doubtless will, how your work would treat slavery. On page 119, stating your fourth chapter’s thesis, you write: “In the evangelical community the rituals of spiritual life that marked members’ entry into the community and unity with Christ existed in marked contrast to the rituals of social death that surrounded slavery.” Can you talk about how this argument (that slaves joined evangelical churches because, unlike in the larger society, evangelical churches gave them access to honor and community) challenges the relevant historiography?

BE: One of the puzzles for historians of evangelicalism and slavery has been why so many enslaved people sought to join churches (as opposed to simply attending) when in most cases this effectively added another layer of white authority over their lives in the form of church discipline. Without diminishing the reality of unequal treatment in these churches, I wanted to approach this question in the larger context of the place that enslaved people held in an honor culture. Orlando Patterson once called slavery a kind of “secular excommunication” or social death in which the slave is denied any identity or honor of his own and serves only to further the master’s honor or social personality. Whether this social death was a reality or simply a constant threat for enslaved people, as Walter Johnson has argued, it’s clear that the rituals and practices of slavery and the slave trade all reinforced the message that enslaved people were non-entities in the eyes of a white honor culture. Church discipline, restricted to church members, was a powerful contradiction of this message. Church discipline was an acknowledgment that enslaved people were moral agents whose actions mattered in the sight of God and their fellow church members. It was particularly powerful because it was communal, which was just as important to enslaved people as it was to whites, and because it was often overseen by the same people who would have denied enslaved people any standing in a court of law other than as property.