Is Religious Freedom Just Not That Into You?

This is the first of three responses to Finbarr Curtis's  The Production of American Religious Freedom (NYU, 2016). Hot off the presses, this book has much to say to scholars of American religion. Look for responses from Sarah Dees and Andy McKee later this month. 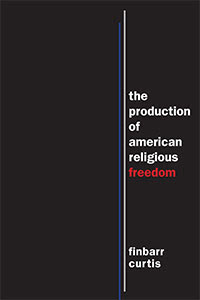 In The Production of American Religious Freedom, Finbarr Curtis gathers a collection of case studies—as varied as Louisa May Alcott, Malcolm X, and Hobby Lobby—to see how “an economy of religious freedom addresses institutional forces that define, produce, and distribute contested social resources in American life” (3). In other words, Curtis wants to see how religious freedom gets assembled and understood in ways that have come to affect ministers, authors, politicians, corporations, and embryos.


Each case study illustrates how various groups have understood religious freedom to be different problems and solutions in American life. What stitches these chapters together is a shared focus on the relationship between public and private life. Curtis writes:


If there is any single common theme, it is that while religious freedom often promises individual liberation from social constraints, this is the one thing freedom does not do. There is no such thing as unconditioned freedom that exists outside of social life. As the economy of religious freedom produces, distributes, and challenges different social arrangements, it addresses contradictions between formal promises of religious liberty and the practical exercise of freedom (5).

Readers who approach this book hoping for a comprehensive, synthetic narrative of religious freedom in America will be disappointed. Curtis does not do this (nor, as he makes quite clear, does he intend to do so). Instead, the book serves as a proof-of-concept for studying this “economy of religious freedom” at discrete moments in American history.

For Curtis, religion and religious freedom are coherent concepts only because we expect them to be (167). Individuals are not self-directed agents freely making rational choices about religion in a spiritual marketplace, but rather people operating within contexts shaped by institutions and community groups strategically navigating the public and the private. If you aren’t sure what this means in practice, the good news is that Curtis is deliberate and reflective in his choices. His arguments are carefully and patiently mapped. Not entirely unrelated: Curtis is, as a general rule, very interested in You (and you, and you).

Curtis takes familiar figures in American religious history (like Charles Finney, William Jennings Bryan, Malcolm X) and figures that show up in survey courses perhaps less than they should (such as Louisa May Alcott, D.W. Griffith, Al Smith) and reinterprets them through an economy of religious freedom to reorient each figure’s relationship to freedom, religious and otherwise.

What to do, for example, with the “two Bryan problem”? How to rectify the earlier William Jennings Bryan as progressive champion of the laboring masses with the later conservative reactionary so potently fictionalized in Inherit the Wind (1960)? Or, to put it more bluntly than the book does, why does Bryan stop liking freedom? Curtis depicts Bryan’s career as one that “illustrates an alternative economy in which quantitative abstractions were given less weight than sympathy among laboring bodies” (45). Curtis makes a compelling argument about Bryan’s “Protestant convictions” to complicate recent arguments about Protestant-centric models of secularism and religious freedom in American history.

For my money, though, the book hits its stride with Al Smith. Curtis takes the “paradox” of Smith—a progressive with ties to machine politics, a Catholic who argued for the separation of church and state—and argues that Smith saw these things as mutually reinforcing rather than contradictory. This is because, as Curtis shows, Smith understood these parts of his identity to support calls for substantive equality among American citizens, under a “secular” government in which every citizen had equal access to government institutions.

Smith’s commitment to substantive equality extended beyond religious freedom to economic and social life. Smith used church-state separation arguments—normally used by Protestants against Catholics—to suggest that minority religious communities (especially those that prized communal or institutional identifications and behaviors) were discriminated against by Protestant America. In other words, was it possible for a government to be secular if certain subsets of citizens were excluded from public life on account of their religious convictions? Smith, as a Catholic running for president in 1928, thought not:


Smith’s understanding of religious freedom was not reduced to individual choices; it included institutional and communitarian loyalties. A conception of freedom that was divorced from the realities of institutional power would be politically irrelevant. In other words, a serious commitment to religious freedom required Americans to respect the cultural and religious integrity of groups (106).

Another way of getting at the book’s focus, then, is by asking “What does it mean to be a person?” You might consult the index entry for "People, the" (207). You could also say that, in this view, to be a person is to be produced in distinct social spaces and through specific institutional arrangements: the lower East Side, the Nation of Islam, or corporate quarterly reports. If you find it curious that a book focused largely on individual subjects rejects the argument that they are valuable to examine primarily as individuals, you are not alone. Curtis begins by explaining that “this book analyzes governance in a self-governing nation” and, one hundred and sixty-six pages of analysis later, he concludes that “America does not add up” (3; 169).

After thinking with this book for several weeks now, I have come to think of The Production of American Religious Freedom as a toolbox with which you can tune-up your own ideas about religious freedom, regardless of the time period or geography in which you’re working. Those of us thinking about a turn toward institutions, especially public ones, should pay attention. I found myself slowly taking apart how I’ve used religious freedom in my own work, and then putting it back together, to see what Curtis’s economy of religious freedom might do for me. Readers should investigate what it might do for you, too.