"He who sings prays twice"

Today's guest post comes from Jennifer Callaghan, a doctoral candidate in Religious Studies at Northwestern University. Her dissertation, Mass Effect: The fall and rise of Latin in the long U.S. Catholic liturgical movement, tracks the various ways that English and Latin figured in articulations of American Catholic identity before and after the Second Vatican Council.

U.S. religious communities have frequently adapted popular technologies to their own projects. They've done so in ways that pushed forward those technologies as much as their own group aims. Yet this cooperation can seem counter-intuitive.  In an Introduction to Religion course this summer, several of my students expressed surprise that religious groups made apps - that Muslims received notifications about the call to prayer on mobile phones, or Catholics used their phones to guide them through the examination of conscience that precedes Confession.  Religions are traditional, my students said; they don't like modern technology or culture.

Of course they do, though. From Tona J. Hangen's work on evangelical Christians and the radio, to Fred Nadis' study of spiritualists and the "technological sublime," historians of American religion have shown how productively religions engage with the methods and media of modernity. By the mid-1960s, albums were hardly a new media; Lerone A. Martin's Preaching on Wax: The Phonograph and the Shaping of Modern African American Religion demonstrates the use African American preachers and congregations had made of records for decades already.  Still, the intersection of religion and the record album created interesting possibilities for the U.S. Catholic Church in the 1960s.

American Catholics encountered the 60s as the overlap of two significant social revolutions. Their American society broke and then reconfigured the shared set of political and cultural norms, both of which were reflected in popular music.  The Second Vatican Council, a meeting of their global Church in the early 1960s, sparked developments in theology, ritual, and religious culture.  These changes, too, had musical effects, especially on the Mass.  New liturgies needed new musical settings, and the Council's call for opening the Church to local cultures meant those settings bore the influence of a variety of musical styles.

Musical settings for the Mass were familiar to classical music audiences.  That is, the Mass had long been both a religious practice and a subgenre of art music. But increasingly, popular musicians reconfigured the Mass for their times.  Simon and Garfunkel's 1964 album for Columbia Records included a setting of the Latin Mass prayer Benedictus.  Two rock bands, the Exceptions and the Electric Prunes, released full Mass scores.  The former's 1966 album, released on Chicago-based F.E.L. (Friends of the English Liturgy) Church Publications Ltd., was advertised as "an example of what some young people find to be a meaningful expression of worship."  The Prunes' 1968 Reprise Records release made no such claims, and the inclusion of their Kyrie Eleison (another prayer from the Mass) as a track on the 1969 Easy Rider film soundtrack may have put further distance between the album and a classically liturgical setting. These releases varied in popularity; but as a trend, they both expanded and exceeded the territory of sacred music, widening the reach of the Catholic Mass while denaturing its connection to strictly Catholic expertise. 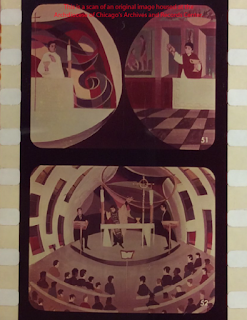 At the same time, albums provided the institutional church with a medium through which to pursue thoroughly parochial projects as well.  Churches and parish schools throughout the Archdiocese of Chicago, for example, purchased albums to learn about and practice the music for new Sunday worship possibilities.  Many of these records were available for both institutional and personal use.  But some were produced more or less exclusively for official Catholic educational work.  One of these was the 1968 album and accompanying filmstrip sold by Thompson - O'Shea Associates to help Catholic educators introduce the 'new' liturgy.  Let Us Give Thanks! walks listeners through the whole history of the Catholic Mass until they arrive at an appreciative new understanding of their central public worship.

The album, filmstrip, and a printed script were available for $20.00 to churches and dioceses.  Rev. William H. Thompson and Rev. William J. O'Shea wrote the narration for Jim Gannon, and Walter J. Bernadyn provided their script with vivid and stylish illustrations to flash in succession across a projection screen. The presentation was designed "to show that the 'new Mass' now celebrated in Catholic churches is not really new at all. It is a restoration of important features of the original Eucharist which were lost in the course of centuries." Despite the obvious changes to public worship over the past five years, the narrator urged listeners to focus on this unchanging core.  The script booklet included a series of discussion questions which it encouraged event organizers to use "RIGHT AFTER VIEWING LET US GIVE THANKS!," as "Adult Catholics have many misgivings about the modern changes in the Mass. This program is designed to get you talking honestly about worship!"  Catholics who were uncomfortable with the obvious changes, especially those whose age might put them at odds with the folk Mass music that F.E.L. and other publishers were distributing to the parish youth, would be relieved to find that what seemed jarring was, in fact, a natural progression. 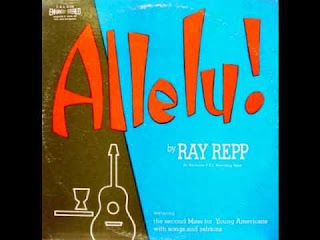 The presentation ends with a discussion of the 1960s liturgical reforms, celebrating the way they ensured "a healthy flexibility, plenty of room for new ages to express themselves in new ways." As the narration comes to a close, Gannon's voice fades into a selection from Ray Repp's 1966 album Allelu!, reproduced with the permission of F.E.L. Church Publications Ltd., which had released the Exceptions' Rock 'N' Roll Mass the same year.  New ages and the religious communities they foster express themselves through engagement with and negotiation of popular fields and technologies.  The Catholic Mass moved between liturgical, educational, commercial, and artistic settings in the 1960s with the energy produced by leaping over the gaps between them.