I am not going to pretend to understand what's going on in Turkey right now, but the attempted coup has turned a media spotlight on cleric Fethullah Gulen, who has lived for many years in exile in the Poconos. Gulen might or might not have anything to do with the coup; he denied any involvement and suggested that Turkey's President Recep Tayyip Erdogan might have staged the whole thing to tighten his hold on power. Gulen is, however, more clearly linked to an extensive charter school network in the United States, including Harmony Public Schools, the largest charter network in Texas. The schools generally advance a STEM-focused curriculum and are not accused of religious indoctrination, though they have aroused concerns related to financial transparency and preferential treatment of Turkish teachers and contractors. (Some Fethullahist schools outside the U.S., by contrast, are overtly religious.) Additional concerns about the American schools surfaced earlier this summer, when the Turkish government lodged a complaint with the Texas Education Agency. 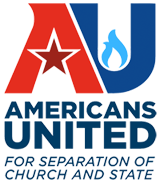 Given my research background, I look at this story and think, Americans United for Separation of Church and State should be all over this! This is exactly the kind of scenario the organization was founded to combat! AU is not, in fact, all over it, though religion in public schools, government subsidies of religion, and school vouchers are three of the group's top 10 issues. AU did mention Gulen once in a 2012 piece on charter schools. That AU isn't taking particular notice of this story is a useful reminder of how mobile the "wall of separation between church and state" has been over the years, even for the most prominent organization devoted to bolstering it.


Start with the name. Now shortened, it began in 1947 as Protestants and Other Americans United for the Separation of Church and State. AU elides that bit of history on its own "about" page. There's a better capsule history on the finding aid for the AU archives at Princeton University. The "Protestants" in the original name was not incidental. The group's founders included a who's-who of the Federal Council of Churches, and its manifesto was mostly written by Christian Century editor Charles Clayton Morrison. The church these men wanted to keep separate from the state was the Roman Catholic Church, which had, in their view, encroached on American religious liberty via President Harry Truman's diplomatic recognition of the Vatican and, more alarmingly, via Everson v. Board of Education (1947), which allowed state funds to be used for the transportation of students to Catholic parochial schools.

Morrison's manifesto is not readily available online (if anyone can find a link, please post it in the comments), but Jesuit theologian John Courtney Murray's response is. Murray saw what the POAU founders denied, namely that their wall of separation between the Catholic church and the American state also served to cement the connection between Protestants and the American state. Murray wrote, dryly,

"For its own part, PU has no sectarian interest. There is great insistence on its purely political aim, most meticulous disavowal of any anti-Catholic animus, most explicit denial of any intention to introduce religious divisions into political life, most thoroughgoing repudiation of all religious intolerance. On the banner of PU is not written, 'No Popery!' but simply 'Separation of Church and State!' (Or more in particular, 'No Myron C. Taylor at the Vatican!' and 'No Money for Catholic Schools!')

"This banner is raised in the midst of a 'united Protestantism which is sinking its own differences in a common effort' to enforce these two great negations. All Protestants, therefore, are declared in; an earnest invitation is extended to patriotic Jews; and the doors are open even to those Catholics who happen to have some 'patriotic loyalty.' Moreover, in addition to enlisting individual citizens in support of its negations, PU also offers itself 'to all churches and synagogues as their own instrument' for the high political purpose of bringing to bear 'their prompt and concerted resistance to the encroachments' of the Catholic Church. Consequently, PU appears not only as a political lobby, but as a political lobby that is the instrument of all organized religious forces in the United States, except the Catholic Church."

POAU was able to couch its opposition to the Catholic Church as patriotic in part because it saw the Catholic Church as a political entity. In the words of the 1960 "POAU Statement on Religious Issue," occasioned by John F. Kennedy's presidential run, "The Roman Catholic Church is both a Church and a State." The POAU grounded this assertion in canon law against Catholic children attending public schools, and in the existence of Catholic political parties outside the U.S.

Which brings me back to the Harmony schools. I'm pretty sure they take more public funding than Catholic schools in the 1940s did, and they have actually, not just hypothetically, brought with them the entanglement of a foreign government. But foreign entanglement is no longer a top concern at the PU-now-AU. Rather, the AU is most concerned with fortifying a wall between certain forms of American Protestantism and the American state. Partisans of that kind of Protestantism now sponsor their own private schools (see Seth Dowland's Family Values for more on that story), which has to be one reason why Texas of all places became home to so many Gulen-affiliated schools. Americans remain as fond of walls as ever, but it grows more and more difficult to agree on where to put them.