Outsiders in a Promised Land: Interview with the Author 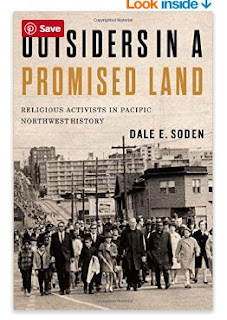 In a well-researched account of religious activism in the Oregon Territory from the late nineteenth century to the present, Dale Soden's Outsiders in a Promised Land (also reviewed by Paul Putz, here) draws several meaningful conclusions. He shows that despite the fact that the region has always had a reputation as the least "churched" region in the country, religious activists have had an outsized influence within the region. For, as outsiders, they have frequently seen themselves as leaders in renewal and reform.  In casting an historical glimpse over the long period from the late nineteenth century to the present, Soden illuminates the long-term repercussions of both Victorian and Social Gospel work in the region.
I "sat down" with Soden over email and asked him a few questions. As you'll learn by the end of the interview, Soden was one of Paul Harvey's history professors!

1.   1. As you note in the book, we rarely talk about religion in the Pacific Northwest, partly because the region has been among the least "churched" in the country. Why was/is this region so relatively unchurched? Why is the Pacific Northwest so important for historians of religion to consider?

Most historians suggest that at least four factors contribute to the region being historically the least churched (although New England very recently has surpassed the Northwest in the least-churched category):  1) geographic remoteness.  The region was generally the last to be settled among the lower 48 states.  For decades, if not for nearly two centuries, the Pacific Northwest was understood largely as a hinterland in the words of historian Carlos Schwantes.  As a consequence, religious culture and institutions were slow to develop in comparison with other parts of the country.  2) the value of individualism and a desire for a fresh start.  This is often cited by historians as central to the ethos in the Northwest.  This ethos tended to work against the impulse to bring existing institutions to the region.  While it is generally argued that Pacific Northwesterners tend to be “spiritual” they tended to be comparatively less religious in a formal sense.   3) distance from the home office – here people have argued that the centers of mainline Protestantism are found on the East Coast, the Midwest, or in the South  All this made the reestablishment of institutions more difficult in the Northwest simply because of distance; 4) And finally the allure and attraction of natural beauty of the region.  While there are certainly other regions of the country that have natural beauty, the Pacific Northwest is particularly blessed with mountains, rivers, and an overall abundance of natural resources.  All this has made some historians suggest that worship of Nature competes with worship of God in a liturgical context in Sunday morning.  Of course all of these hypotheses are difficult to prove with great certainty, but taken together, they seem to make a compelling case for why the region is less churched comparatively speaking.

2.  The first part of your book focuses on the (male) church leaders and (female) social workers who built institutions to foster moral character, Christian families, and social justice for the poor. You conclude, "It is not an exaggeration to claim that, combined with the work of women's organizations, religiously motivated people dramatically improved conditions for women, children and many working men" (66). To what extent are these religious activists remembered within the history and memory of the Pacific Northwest? How would you like us to remember them differently?

Thanks for this question.  For the most part, the church leaders and social workers are not particularly well known in the history of the Pacific Northwest.  I think largely historians have been interested in the role that economic forces as well as mostly male entrepreneurs and early politicians played in shaping the contours of the region.  I hope in this book, that this side of the Northwest’s social development is revealed in a more complex manner.  I do believe that these church leaders and social workers were part of a generational conflict that centered on the clash between Victorian values and  a culture that catered mostly to the interests of single males.

Your second question provokes a certain irony when juxtaposed with the first in the sense that it is becoming increasingly clear that the nation as a whole is becoming less formally churched.  Consequently, I think historians have something to learn about the future dynamics of religion in other regions by studying the Northwest.  In other words, the Pacific Northwest may shed light on future trends across the country.

3. Your book reminds us that the religious crusades of the 1920s--crusades against the "evils" of alcohol abuse, prostitution, immigration from Asia, Catholics, and even race-mixing--flow right out of the Social Gospel era. What happened? How were these crusades connected for the activists you follow?

This is a great question and one that is challenging to answer in a few sentences, but let me suggest this:  at root, many of the crusades that you mention are responses to a fear of “the other” or a fear that the immigrant in particular would bring values and social behaviors that would break down a perceived unity within the broader culture.  It was also a response to the very real threats to the well-being of women and children.  There certainly seemed to be a strong commitment to a notion that the United States should be based broadly on a set of homogeneous values.  Some of those values centered on trying to offer protection for women and children; some of those values centered on trying to alleviate poverty; but some of those values took a nasty turn toward certain groups of people.

4. You show us that, from the mid twentieth century forward, both liberal and conservative religious activists positioned themselves as outsiders seeking to reform and renew their culture. Liberals emphasized the (Social Gospel) traditions of seeking social and economic justice by challenging segregation, labor injustice, environmental destruction, and systematic inequalities. Conservatives emphasized the (Victorian) traditions of building masculine men and counter-cultural families by building megachurches and parachurch ministries with a strong gender component. Why is this earlier context so important to understanding the social and political history of the Pacific Northwest in the twentieth century?

Thanks again for a great question.  I think a longer arc of this narrative suggests how complex and deeply rooted these social movements are.  This longer arc helped me appreciate the depth of some of these problems as well as the complexity of the impulses that led religious activists to become engaged in the public square.  Religion can be intensely private and it can be intensely public.  I think it is difficult for any activist (religious or otherwise) to comprehend very fully where one enters the stream of a social movement, and of course, even more difficult to predict the outcome of such activism.  All that should push us toward greater empathy with these historical figures and perhaps a more sobered sense of our own judgments.  And yet, I find so many of these figures to be inspiring in the sense that they acted out of deep conviction in an effort to try and make the Pacific Northwest if not the world a better place.

5. You told me that Paul Harvey was one of your earliest students! What was Paul like as a student?

Paul was great!  He still ranks as one of the best writers that I’ve ever had the pleasure of teaching in my 35 + years of college teaching.  His dry wit and critical engagement with texts (I think we read Moby Dick) in a course on American Intellectual history were all great memories.  It has been such a pleasure to see what a great career he has established and how he has mentored so many younger historians.
Email Post
Labels: author interviews janine's posts Pacific Northwest religion and politics