The Formation of Conscience: A Few Thoughts on Theological Language and Religious Reality

Pope Francis earned a few headlines recently with a remark on how Catholic politicians were free to decide on votes for same-sex marriage – for or against – using a “well-formed conscience.”  The comment and its responses caught my attention because I am trying to understand why Catholics came to think of conscience-formation as a psychological process in the 1970s. The contemporary discussion seems to have a different tone. Much of the current discourse on conscience-formation focuses on assent to- (or a bypassing of)- specific teachings. In this blog post, I want to explore, briefly and tentatively, the relationship between theological language of conscience and the nature of the reality of conscience for Catholics.

In their reactions to Pope Francis’s airplane comments (and similar remarks made by Archbishop of Chicago Blase Cupich in the fall of 2015), a few Catholic journalists turned to The Catechism.  A writer for The Catholic World Report provided his readers with canon 1783: "Conscience must be informed and moral judgment enlightened...A well-formed conscience is upright and truthful. It formulates its judgments according to reason, in conformity with the true and good as willed by the Creator." 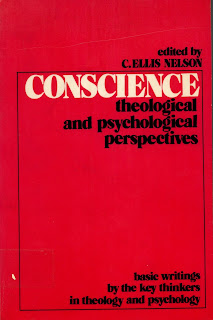 Another journalist quoted canon 1801 (here I provide 1799 and 1800 as a warm up): "Faced with a moral choice, conscience can either make a right judgment in accordance with reasons and the divine law or, on the contrary, an erroneous judgment that departs from them. A human being must always  obey the certain judgments of his conscience. Conscience can remain in ignorance or make erroneous judgments. Such ignorance and errors are not always free of guilt."

On the pages of The Catechism, conscience appears in a package of  "shaping" or "arranging" words: informed, formed, formulates, and conformity. The important take-away is this: Catholics understand conscience to be receptive to their efforts of cultivation.

I sometimes find myself back at the old language dilemma raised by social construction theory. Is this a language about a reality or does this conscience-formation language create a reality? The language of 1970s conscience-formation, laced with psychology and pyschoanalysis, was different in tone but it seems to be in the family tree. It included words like "development," "relationships," "stages," "subjective," "positive," "internal," and "guiding light." If the language changes, does the internal reality of conscience change too?

Historians of American Religion have their primary sources to consult. Primary sources are the initial arenas where such questions can be put on the playing field or the chopping block. My chapter on the 1970s psychologizing of conscience uses periodicals, books, lectures, sermons, letters, newspaper articles, scholarly articles, the proceedings of academic conferences on conscience (!), a 1952 dissertation by a Benedictine Monk, and even syllabi. The psychology of conscience formation was a fresh language -- new in tone but not always in substance -- geared towards the reality of conscience.  I plan to work through these questions about theological language and religious reality as I write this section of my dissertation.