Research Tools and the Dissertation

As I prepare to defend my dissertation, I thought it might be useful to share the tools I found helpful during the research and writing process. I enjoyed these kinds of posts when I was starting my diss. I hope this post will be helpful to others in the same place.

When I started the research process, I spent a lot of time scouring the web for suggestions on setting up good academic workflows. In particular, I was interested in programs that would help me acquire sources in the archive, organize the material in useful ways, and make the writing process more efficient. I wanted to have a process already in place to accommodate the large amount of archival material I expected to gather. I was looking for apps that were inexpensive (if not free) and easy to use.

I was fortunate to spend a good deal of time in the archives, and I experimented with several approaches to scanning and photographing material. I originally planned to use a digital camera/tripod setup but found it cumbersome. After some tinkering, I preferred using a scanner app on my iPhone (you could also do this with a tablet, though I think my arms would have gotten tired much sooner!). I scanned thousands of documents and got a pretty good rhythm down. I quickly discovered that not all scanning apps were created equal, and several of them fell apart when handling large files. My favorite was ScannerPro (runner-up: TinyScan). I spent a few dollars on the “Pro” upgrade and it was worth every penny.

Here's how it worked. I linked the scanning app to my cloud storage of choice (Dropbox, Google Drive, iCloud, etc., all work). Then I just sat in front of the documents (...so...many...documents...) and scanned away (it functions like taking a picture on your phone). I was shocked at the quality of the scans—far sharper than what I had been working with previously. When I was done scanning, the app prompted me to title the documents (e.g., "Jane Smith's Diary" or “Box 12, Folder 3”) and automatically uploaded it to Dropbox while I moved on to scanning the next document. Do note this requires having a WiFi connection (or at least good cellular data coverage) wherever you're doing archival work. Access to a power source was also key, since I learned this drained my phone's battery pretty quickly. But if you can stay plugged in and online, it moves very quickly. I also appreciated that these files weren't stored only on my phone, since they were immediately backed up to Dropbox.

Then, after a hard day's scanning, I'd fire up Acrobat Pro on my computer, grab the files in Dropbox, and process the lot of them with Acrobat’s batch OCR feature. In short order I'd have text-searchable documents to organize as desired. One of the drawbacks of this approach was that it became very easy to scan everything. My policy at most archives (especially archives I could only visit for a short time) was to scan anything that might be of use, and read it later to determine if it was useful. This had benefits (I was able to cover a lot of ground) but also drawbacks (reading this scanned material took far longer than I anticipated). 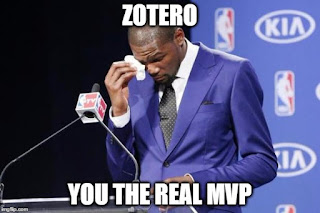 Once everything was scanned and put through text-recognition, the challenge became organizing, tagging, and processing all this information. At this stage, Zotero was a lifesaver. I used it to manage my citations, notes, and scans from the archives. If you're not familiar with Zotero, it's worth your time checking it out to see if it fits your workflow. There are many handy guides for getting started with Zotero. I’ll simply say that Zotero was a huge difference-maker in my project. Bonus: with a (free) Zotero add-on called Zotfile, I sent PDFs from my computer to my iPad, where I marked it up as I pleased (highlighting, writing, etc.) before sending it back to my computer where Zotero automatically extracted my annotations, notes, highlighted passages, etc. and made it searchable. I love it.

When it came time to actually write, I primarily used Microsoft Word. I tried—really tried—to figure out Scrivener. I had heard so much about it from a number of #twitterstorians, but it didn’t seem to gel with me. I suspect I would have had more luck had I been using the program throughout the entire project, though. I’m interested in hearing from those who’ve had success with Scrivener (or any other non-Word word processors, really).

Of course, sometimes things break, stop working, or new and shinier applications come about, and it’s easy to spend too much time trying to get a program to work rather than, you know, actually working (I write from personal experience). When that happened, I found RescueTime to be a helpful tool to get back on track. RescueTime tracks how your time is spent on your computer(s), spitting out helpful reports about what you did and for how long. Seeing the time I was spending on writing—or not writing—encouraged me to get more done. It’s also free (though they offer a premium version that allows you to track offline time, if that’s your thing). I was horrified at learning just how much of my day is spent on e-mail, for example, and it forced me to confront my habit of falling down various Wiki-holes. Finally, when I was making revisions, Hemingway came in handy. It helps trim your writing by pointing out passive voice, adverbs, and the like. You can see (and play with) a simple version of the app here, though if you find that useful I'd suggest checking out the desktop version.

No doubt there are many other useful productivity apps and workflows—this is just what worked for me. I’d love to hear about other approaches in the comments.
Email Post
Labels: Michael Graziano's posts research tools Zotero

Hunter M. Hampton said…
Great post Mike. I completely agree with your strategy for research. With limited time and travel funds, you are right that archive trips are more about acquisition than actual research. I prefer the camera, tripod, and document stand. The tool that I found incredibly helpful was a wireless remote for the camera. You can find them on Amazon for about $15 . It made it so that the only time limiting factor is how fast you can get documents on the stand. As for the actual writing of the dissertation, a second computer screen changed my life. They are about $100 on Amazon, but you can spend $1000 if you are that loyal to Apple. The second screen allows you to have your digital document on one screen and Scrivner on the other. (Yes, I use Scrivner and so should the rest of the world. It is frustrating at first, but worth the fight. The entire idea behind it is that a dissertation or book is not one huge document, but a combination of smaller sections of writing). Alright, off my Scrivner soapbox. Two screens makes it so that you don't have to click from one window to the other, or lose your eye sight by trying to use a split screen on a laptop. I am also working on a potion that makes you type undistracted for 8 hours straight. Once I patent it, you can find me on Shark Tank. Thanks for the post and the app suggestions.
February 4, 2016 at 4:44 PM

Seth Dowland said…
This is good stuff, Mike. I, too, use an iPhone scanning app (CamScanner Pro, which is fine but not amazing) + Dropbox. I use Zotero in the archives, to take notes as I go, and to link PDFs to Zotero records while I'm still sitting in front of the actual document. (I echo everything you say about Zotero -- amazing. I wish it had been around when I was in grad school.) This workflow slows me down -- I don't scan as much as I used to -- but I think that's been good on the whole. As you note, reading scanned documents takes a long time, and I've found it better to have decent notes on fewer documents, especially when teaching full-time (as I return from research trips and have to dive back into classes & committees, which doesn't leave much time for "post-processing"). I still scan plenty, but I appreciate not having a soul-crushing mountain of documents on my laptop after each archive trip.

Michael Graziano said…
Thanks for the feedback! Hunter, do you recommend any particular guide for using Scrivener? I used the built-in tutorial, but I wonder if there are better guides. I would like to try to use it in my next project. And when you figure out that potion, I'll be contributing to the Kickstarter.

Seth, I totally agree about the time required for "post-processing." I underestimated the value of notes I took while in front of the documents ("remember to connect Document X to Document Z"). I lost track of the number of times I later asked myself "Why did I scan this, again...?" I'll definitely be tweaking that approach for the next project.
February 5, 2016 at 9:30 AM

Unknown said…
I've used Scrivener with some success, although not with any of the built-in templates they provide. I start every project from the "Blank" option and just go from there. It has helped me organize both my thinking and writing, and the ability to move paragraphs, chapters, sections, or just chunks of text in general around is incredibly useful ("This section on X really makes more sense in this other conversation later in the chapter"; "I need to group these sources this way rather than how I had thought before"). Its export capability is very, very finicky, though, and I do a lot of post-processing in Word before sending it on to committee members.

I'd be happy to field questions or start a dialogue on how it's been useful. Always looking for more tools, though, so thank you, Michael!
February 5, 2016 at 9:45 AM

Unknown said…
Since you like Zotero, you'll probably be interested in Tropy, which is going to be developed by RRCHNM to manage photos from archives. Here is the announcement.
February 6, 2016 at 9:27 AM