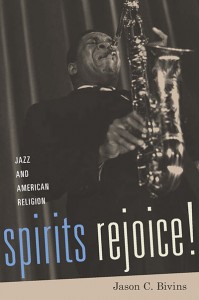 No question that our colleague Jason Bivins brought down the house during a session devoted to his book at the fall Seminar in American Religion hosted by Notre Dame's Cushwa Center earlier this month. Cushwa clearly kicked out the jams for his appearance, going so far as to hire a local quartet to play jazz standards after the Friday night dinner. Those who have read all or part of Spirits Rejoice! know that few have the writing chops to capture the ecstatic supercharged impact of so much of the music he writes about; and Jason doesn't flag at all when it comes to spirited colloquies of a scholarly variety.

The seminar's well-worn format is to assume everyone has read the book (partly by sending out copies in advance), invite two speakers to offer commentary, give the author a chance to respond, and then open for general discussion afterwards.

The commentaries were nearly as heartfelt and expansive as the book itself. Stephen Schloesser, a Jesuit polymath from Loyola University in Chicago, played five Youtube clips of French organ improv music as a way of extending Jason's argument about the spiritual essence of jazz to Schloesser's particular love: 19th-century French organ music. The historian, whose field is modern European intellectual history, pressed questions of abstraction and time in relation to improvisation, and wondered about the historical narrative suggested by the book's material, mainly avant-garde jazz since World War II. Does Spirits Rejoice! privilege musical abstraction while undervaluing melody? It's hard to argue that it doesn't.

The second, by Notre Dame theologian and dean Hugh Page, Jr., connected Jason's book to the vernacular music Page plays locally: the blues. He focused on a particular performance last summer in South Bend of the Willie Dixon song first recorded by Muddy Waters, "Hoochie Coochie Man." Page recalled it producing a moment of sublime transport in which he felt himself clearly in the presence of the transcendant. Stressing that we badly need new paradigms for thinking about race and religion, and reflecting on his own recent classroom experience teaching Coltrane's A Love Supreme, Page wondered how to leverage the possibilities of such epiphanic moments within sometimes inhospitable institutions like the church and acadamia.

A blow-by-blow of the anecdote-rich collective riffing that ensued at Cushwa is beyond the the scope of this blog, but a few highlights: Tom Kselman challenged about the book's extremely expansive view of religion in jazz, asking whether some musicians would resist his interpretation of what they were up to. Jason acknowledged that many musicians he contacted demurred, wishing him good luck, but that they just wanted to play. The subject line on his emails that went out to potential informants was: "Research Project: Jazz and Religion." Nothing but crickets, according to Jason. After switching the subject to "Jazz and Spirituality" his inbox began to fill up.

As for why there aren't many Catholics in the book, Jason answered that he wrote about people who shared willingly about the interplay of their music and spirituality; not many Catholics seemed to want to talk about it. (It came up in discussion that the Cushwa Center had hoped to stage a performance of Mary Lou Williams' jazz mass but learned that Notre Dame requires that all masses performed on campus use authorized language, which hers doesn't.)

Tom Tweed observed that Spirits Rejoice! seems to be groping toward the beginnings of a new theory of religion grounded in three keywords: experience, practices, and transformation. Jason proposed adding the terms situatedness, simultaneity and, of course, improvisation. He later averred that he didn't want to overgeneralize from improvised music, whether jazz or church organ; what ultimately distinguishes the religion-saturated sound in which he's interested is its ability to draw bodies together, to create publics. Discussion ensued on jazz and the category of sui generis religion, and whether the book was pointing toward a recovery of figures like Rudolph Otto, with his theory of the numinous.

Parts of the book, pointed out Catherine Osborne, brought to mind kenosis, emptying out of one's own will to make oneself entirely receptive to God's will. Jason recalled a friend's remarking, on reading the final chapter, "Hey look, you wrote a theology book!" He said was not unaware of these dimensions of his project but deliberately avoided theological language, wanting to hew to the idioms that are true to musicians like Ornette Coleman and Anthony Braxon, who developed extensive vocabularies and symbolic systems to describe their music.

As noon approached, Cushwa director Kathy Sparrow Cummings asked Jason to nominate t a new national anthem from his invaluable extensive companion website of music referenced in the book. In another forum he might nominate P-Funk's "Red Hot Mama" or something by the Bad Brains, he said, but for Cushwa he offered two possibilities. The first was the fleet, boppish opening minutes of Anthony Braxton's "Creative Orchestra Music 1976." But the ultimate choice turned out to be Charles Mingus's volcanic "Haitian Fight Song," always worth a listen.

Anonymous said…
Do you have any thoughts about what recording improvisation does to improvisation? I was surprised that the folks present at the seminar raised no questions about technology and whether recording jazz does something to the experience of it.
November 18, 2015 at 4:18 AM

Jason Bivins said…
Thanks so much, David, for that kind writeup.

DG, a really interesting and important question indeed. I know of a great many improvisers who, while they do want their work documented, are adamant that the live experience is irreplaceable. Some, like the late Derek Bailey, were insistent that on some level the music became different music when played as a recording.
November 19, 2015 at 12:20 PM

David Stowe said…
Thanks for raising this point, DG (Dizzy Gillespie?). At the Cushwa Seminar Jason did mention that the infrequent creative artist who "makes it" with a solid record contract often lives to rue the constraints that the record label typically puts on his or her work. He cited example of Anthony Braxton, who got a surprisingly fat contract with Arista in the seventies but found the suits stifling his creative impulses (which were admittedly grandiose). A couple of other points: Think how the crucial early decades of jazz were shaped by the limitations of the three-minute, 75 RPM recording. Those parameters had a huge impact on the formal aspects of jazz: what an arrangement could do, how much solo space was allowed, and so on. Turning jazz into short-form pop music. Second, some jazz artists are famous for not performing nearly as well in the studio as in live venues, Sonny Rollins being the best-known example. Except so many of his studio recordings are masterful, regardless.
November 19, 2015 at 2:39 PM

Anonymous said…
Thanks, David and Jason.

I wish I had thought to bring up this question at the seminar. It's one that has haunted me since watching Glenn Gould's reflections about performance and recording in Thirty-Two Short Films about Glenn Gould.
November 21, 2015 at 10:24 AM