Although early in October, all of the activities of the semester have arrived in full force--including the several stacks of papers waiting to be graded.

With that in mind, let me continue this fall's reflection on Puritan studies with at least a short review of Abram Van Engen's Sympathetic Puritans: Calvinist Fellow Feeling in Early New England (Oxford, 2015). 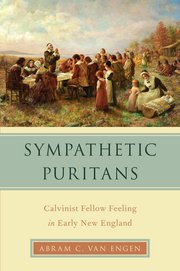 Scholars of American religion have long known that New England's Puritans were lively, emotional people--one need only read Edmund Morgan or Charles Cohen to be assured of that. Yet, the general impression in the public mind remains that the Puritans were cold, unfeeling, ready to paste a "Scarlet Letter" on miscreants. Surviving portraits too often make them look overly-starched.

So, Van Engen's book is first a reminder of the depth of Puritan feeling. Even more than that, it serves as a close study of the concept of sympathy in Puritan culture, with a special focus on seventeenth-century Massachusetts Bay.

Van Engen describes the multiple roles sympathy could play. It served simultaneously as a duty to have compassion for and identification with fellow saints and as a sign by which Puritans could gain some assurance of salvation (if that sympathy was present). Further, it served a political purpose by indicating who was--and was not--inside the community. In a final step, Van Engen suggests that such sympathy itself helped to consolidate Puritanism as a movement. It energized the loop whereby piety called for a society that could sustain and promote piety.

Sympathy, motivated by love and identification with others, thus helped to constitute Puritan community. Or, as Van Engen puts it succinctly: "The godly needed each other for grace." (14)

As I was reading this description, my thoughts quickly went to John Winthrop's "Modell of Christian Charity." In particular, Winthrop has several moving passages about community commitment. In one, he riffs on the Latin phrase "simile simili gaudet"--like draws onto like. In another, he quotes the ancient historian Aeneas Sylvius about love in the Ancient Church. I was not disappointed--several pages later Van Engen provided a close reading of Winthrop's lay sermon. Winthrop thus really did embody the sanctified affections demanded by Puritanism.

Van Engen helpfully traces a trajectory of this sympathy that reaches to early modern writers such as Erasmus and Calvin. He keeps a transatlantic perspective, showing how the concept developed both in Old England and New. Indeed, one powerful use of sympathy was to maintain the tie between New England's Puritans and their fellow saints who had remained behind. The bulk of the focus is on Massachusetts Bay, however, and here we find many "old reliable" guideposts from the seventeenth century--Anne Hutchinson and the Antinomian Controversy, outreach to Native groups, Mary Rowlandson, and the Salem Witch Trials. Still, Van Engen's tracing the thread of sympathy through these well-known moments is useful and illuminating.

With such a treatment of sympathy and Puritanism, Van Engen also wants to tie into eighteenth-century developments. The eighteenth century is often seen as the era of sentiment. In this telling, sympathy and sentiment arose from Anglican Latitudinarianism, which then informed thinkers in the Scottish Enlightenment. In addition to that story, Van Engen wants to provide a genealogy of sympathy rooted in Calvinism and suggest that that outlook provided a much richer soil for sentiment in the American colonies.

Further, although Jonathan Edwards only receives a few mentions, I think there's a strong line to trace between these sympathetic Puritans and Edwards. Edwards praised the "Religious Affections," and in his signs of operating grace listed love for neighbors and for other saints. (And, as Thomas Kidd has recently noted, Edwards hoped these affections would only increase and grow in the mature saint.)

This again suggests to me a point I raised last month--the value of seeing the continuities of religion in the seventeenth century with that in the eighteenth.