An Unlikely Bestseller: The Dutch Catechism in 1960s America

De Nieuwe Katechismus (A New Catechism) hit Dutch bookstores on March 1, 1966. The catechism sold well in its nation of origin. According to one report, Dutch Catholics, a population numbering approximately 5 million,  purchased 400,000 copies. The authors of the catechism, the Hierarchy of the Netherlands and the Higher Catechetical Institute of Nijmegen, had found an audience.  Noting this success, American Catholic publishers recognized the book’s potential in the United States. If the Dutch were hungry for a new catechism perhaps American Catholics had developed similar cravings. Herder and Herder – an important American Catholic press founded in the early 19th century – secured a translator, the imprimatur of Bishop Robert Joyce, and ran off 75,000 copies. 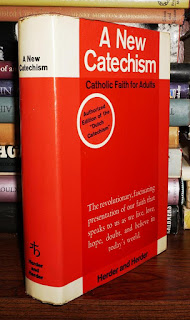 Though an unlikely bestseller, the Dutch catechism had the makings of an appealing text. Its authors, working in an old genre, gave this iteration a new form, a direct purpose, and fresh materials. Unlike the


Baltimore Catechism, which offered readers crisp bullet points amenable to memorization, the New Catechism was a narrative. In the “how to use this book” section of the text, the authors explained that, “the aim of this catechism is to serve the reader by showing him the Christian message as a connected whole.”  The New Catechism begins, appropriately, with the “origin of existence,” it then moves readers through Church history, details the ministry of Jesus, and it weaves the cosmic nature of the church into its rituals and teachings. The reader journeys through developed paragraphs stocked with vivid language. The narrative form serves the text’s intended purpose: the authors of the catechism wanted “mature believers” to reflect on their faith. Sections like “The Quest for Truth,” “The Ultimate,” “Who is this man?” and “the Immense Longing,” hoped to foment discernment in the reader. The non-technical, ornate language aided reflection. In a section on “Prayer and Life,” for example, the authors described how “prayer forms spontaneously a unity with our being. It springs from our real life, and links up with a deeper ‘sense’ within us.”  The New Catechism also furnished readers with fresh material. It carried sections on Hinduism, Buddhism, Marxism, Humanism, and Islam.  The catechism also explored dimensions of sexuality in sections on “the erotic element,” “the history of marriage,” “the homosexual” and “education for manhood and womanhood.”

The American reception of the Catechism was mixed. Ghosts of the Index of Forbidden Books appeared immediately. Rumors circulated quickly among American Catholics that the Roman curia had plans to investigate the book.  The actions of clergy seemed to confirm the rumors. Archbishop James Francis McIntyre of Los Angeles banned the catechism from bookstores in his jurisdiction.  The Daughters of St. Paul, while not rejecting the book outright, refused to display the catechism in their Boston-area bookstores, and sold it on request only to nuns and priests.   Bishop Joyce withdrew his imprimatur.  Some American prelates found no problems with the text: Archbishop Hallinan of Atlanta publicly endorsed the catechism.  Significantly, laypeople wanted access to the Dutch catechism. The Cleveland Conference of Laymen, hearing about the ban, protested the non-display sell-to-clergy-only policy and succeeded in making it possible for laypeople to order the book. But Herder and Herder had the final word. Very shortly after the introduction of the book, the publishers reported that 60,000 of the 75,000 copies had been sold.  Time Magazine noted a month later that all 75,000 copies had been sold, and declared the English translation “one of the year’s best religious sellers.”  The catechism’s success set plans in motion to translate the catechism into an additional ten languages.

Reception history is more than denunciations, restrictions, or endorsements. It includes the lived experiences of reading a text – the emotions and epiphanies a text conjures. It would be interesting to gauge how the American laity received the New Catechism with evidence beyond the demands of the Cleveland Congress of Laymen for access to the text and the rapid depletion of Herder’s stock as reported by various news outlets. This blog post takes one step down the road of reception.

An article appearing in the Homiletic and Pastoral Review by layman James G. Murray, an English professor and a book editor for the Long Island Catholic, offers a glimpse into the qualitative aspects of the catechism’s reception. Murray embodied the catechism’s imagined reader. He discerned the text’s most important lessons. He noted the personal nature of the book, its intended audience of “mature” readers, the books penchant for reflection, and the interpretation of Catholicism as an organic whole.  More than this, the Dutch catechism moved Murray. Murray, putting it into his own words, wrote, “I was ‘socked,’ I was ‘hit.’ I should say that this book not only affected my sensitivities but it divinely assaulted them. I believed I am a better Christian for the assault.”  The catechism moved Murray to “grow,” to convert his Catholicism from “external to internal,” and to be more “communal.” Importantly, in reading the catechism, Murray did not imagine himself as breaking apart from tradition so much as he, catechism in hand, was bringing dormant elements of Catholicism back to life. “There is doctrine in this book, but what there is,” he wrote, “cannot be termed ‘doctrinaire.’”  Murray had a near seamless reception from exhortation to internalization. 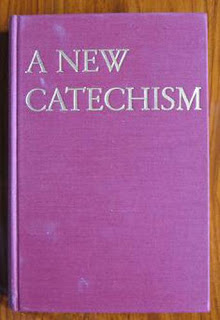 I encountered the Dutch catechism in dissertation research on the theology of conscience because, like other texts of the mid-1960s, the Dutch catechism called for enlarging the role of conscience in Catholic life. Murray took note of the call: “while conscience and commandment are seen as ultimately unified, it is honestly declared [in A New Catechism] that they may come in conflict. When they do, conscience must be trusted.”  I analyze the Dutch Catechism’s theology of conscience in the third chapter of my dissertation. The details need not detain us here, but for my purposes, the New Catechism is a remarkable document. Rather than elucidating the teaching on conscience and leaving it at that, the Dutch Catechism actually attempts to provide an explanation of Catholics’ burgeoning emphasis on conscience. I end this blog post with their (gendered) words, penned in 1966: “There are many reasons why at the present time greater stress is laid on the personal verdict of conscience. There is a growing sense of the uniqueness of each man and of his situation. We are living in a special period of transition when our sense of values is being very definitively renovated.”