John Adams and "The Religion of Democracy"

Since Penguin was kind enough to send me a review copy of Amy Kittelstrom's The Religion of Democracy , I thought the book deserved some thoughtful response.  (Note: there is an excerpt from the introduction here.)

Kittelstrom wants to connect religious commitments with the development of American democratic ideals. Her figures are "liberal" in their outlook, toward both religion and the world. In this, Kittelstrom tells a New England-based story of the evolution of liberal thought--a process Kittelstrom sees as "an American Reformation" (with echoes of Sidney Ahlstrom and Conrad Wright). As such, it's a meditation on the development of one branch of New England's moral reflection, one defining itself against New England's orthodox believers. So, this is a story of religion and American culture--although I was not convinced by Kittelstrom's claim that historians have missed the religious impulses in New England moral thought. (On this point, RiAH readers should feel free to let me know I'm off base. This seemed a truism to me.) 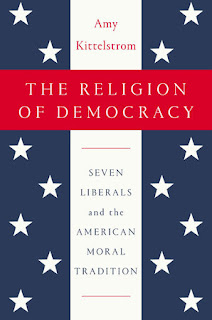 Kittlestrom traces this development through seven representative figures--John Adams, Mary Moody Emerson, William Ellery Channing, William James, Thomas Davidson, William Mackintire Salter, and Jane Addams. Rather than only being about these individuals, though, the chapters aim to be "reconstructions of key controversies in which the actors participated" (15). The figures thus act as framing devices for the debates and issues that develop from the late eighteenth to the mid twentieth century. As a fan and and employer of such a strategy, this seemed a reasonable approach, although the issue is always in the execution.

On a very broad scale, Kittelstrom sees a religious trajectory from "Reformation Christians" to "liberal Christians" to "post-Christian religious liberals" (27). This is a direction of religious movement, and Kittelstrom fairly chronicles it, even as its critics might label it "declension." On the side of political liberalism, Kittlestrom sees great continuities in the desire to enact, via government, the mechanisms to promote human liberty, freedom of thought, and personal development. Despite this continuity, Kittelstrom does note a new development in the twentieth century, as she finds the ideals consumed by New Deal politics, leading not to continued reflection but to partisan dogma.

I'll let others comment on the more sweeping connections and generalizations. I want to offer some response to the chapter on John Adams. Having recently written on John Adams, religion, and politics, I was interested to see how Kittelstrom treated Adams.

In this early section, Kittelstrom is most interested in the religious disputes in colonial Massachusetts which helped produce John Adams. So, Rationalist Congregationalists (the forerunners of Unitarians) receive a great deal of attention. They emphasized the Protestant "right of private judgment" to expand the range of acceptable theological opinions. Although they emphasized the perfection of divine knowledge, they recognized the dramatic fallibility of human understanding. This moved them away from strong doctrinal claims based on revelation to debates about human action (a parallel to developments chronicled by Michael J. Lee). The "moral ethic" they produced emphasized virtue, humanitarian concern, and free debate.

This description raises at least one question--what makes for a "Reformation Christian"? Kittelstrom emphasizes the "right of private judgment" to the exclusion of other concerns. Now, this Protestant concern for the right of conscience was undoubtedly powerful--something well documented by Nicholas Miller in The Religious Roots of the First Amendment--but would individuals at the time have said that was the center of Protestant conception? Although Kittelstrom claims this lack of definition would have been acceptable to John Cotton or Richard Mather, I'm skeptical. The New England way, in slightly different ways in Massachusetts and Connecticut, had aimed to maintain standards of orthodoxy through mutual accountability. This was no Anabaptist prioritization of the individual interpretation of doctrine but part of the confessional, Magisterial Reformation filtered through American realities. 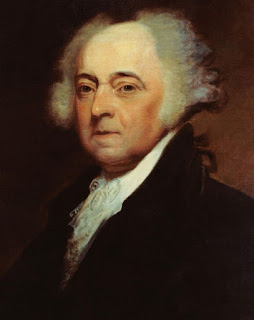 When John Adams does show up, 2/3 of the way through the chapter, he has encountered the rationalism of Jonathan Mayhew and his own minister Lemuel Briant, as well as many advocates of orthodoxy. As he adopts his own religious values--and Adams was always a party of one--he articulates a broad-minded belief that emphasized humane concerns, with respect toward a singular deity. Kittelstrom here tends to emphasize either the diary Adams kept when a young man or his correspondence--most notably with Thomas Jefferson at the end of his life. These broad statements don't fully wrestle with Adams's own view of how religion and society might interact.

This approach runs into several problems for cantankerous, contrarian Adams. One is that his religious commitments are hard to pin down. Gregg Frazer sees him as a "theistic rationalist," which might help Kittelstrom's cause. Still, Adams tended to emphasize different pieces of his belief in different settings--the correspondence with Jefferson does not exhaust Adams on religion. Further, Adams's own beliefs themselves evolved, a point well made in an unpublished paper by Adina Johnson.

Even more significant was that Adams encountered several opportunities where he could demonstrate how he thought religion might be practiced in society. When he was involved in drafting the 1780 Massachusetts Constitution, he assented to a continued Congregational establishment in the state. His personal beliefs about free expression were tempered by his equally strong conviction that religious structures were necessary for society, that public, even government-supported, religion helped society. This same attitude was evident during his presidency. He released very orthodox Fast Day proclamations under his signature, even though he had them ghost-written. When war with France loomed in 1798, Adams used quite orthodox language to call for national unity against the "godless" French. When the election of 1800 rolled around, it was Adams who could be promoted as standing for "God--and a religious President," as opposed to the religiously-suspect Jefferson.

All of this calls for the possibility of an alternative story, at least for Adams. He was deeply connected to the Reformation heritage of New England, but he transformed it into a political cause, away from its Puritan roots. In politics, he was a small r-republican and a Federalist. As a result, he believed in self-government but not in democracy. He was, indeed, a great advocate of a natural aristocracy of virtuous leadership. Adams was not even a classical liberal, but he held onto more classical political heritages even in the new republic. In this vision, religion and government could still support one another. Indeed, the trajectory that flowed from this Federalism for the country may have created a very different path, a different encounter of religion, politics, and modernity.

Wilson Brissett said…
I wonder about how you're using "orthodox" in your discussion of Adams. You critique Kittelstrom for not defining "Reformation Christian" carefully enough, but the rest of your post assumes that we all know what we're talking about when we say "orthodox." You contrast it with rationalism and align it with anti-French Protestant nationalism and support of civil religion. Are these the markers of orthodoxy? I'm only familiar with Adams through the Jefferson letters, so I'm very interested in the possibility of recognizing a more religiously traditional version of Adams. But the examples of orthodoxy offered here seem very much like "Traditional American Protestant Civil Religion," which would be a quite narrow conception of Christian, or even Reformed, orthodoxy.
August 6, 2015 at 9:55 AM

I didn't want to bog down the piece with more distinctions, but you're right to ask for them...and comments are a great place to make them.

Kittelstrom depicts the only opponents of the rationalist liberals as "neo-Calvinists," or heirs of the 1st Great Awakening. I didn't think there was much justification for that label. (Although, had there been some serious engagement with the thought of Jonathan Edwards, there might have been some traction.)

Most scholars would say there were several options in New England at the time. "Old Calvinists" (like Moses Mather) tried to straddle divisions. Also, some orthodox were more willing to coexist with the rationalists than were others.

Rather than draw these points out, I just went with "orthodox," as in following the New England Way (broadly along the lines of Puritan and Calvinist doctrine) and not questioning doctrines such as the divinity of Christ, the substitutionary atonement of Christ, the trinity, or eternal judgment.

As for Adams, he seemed to be able to relate well to many camps, suggesting that what he communicated in public was very different from his internal reflections. Also, he had a great ability to politically communicate different emphases to different people.
August 7, 2015 at 2:32 PM

Tom Van Dyke said…
Thx for this. A

--specifically in New England, the seat of unitarianism as well as today's Ivy League nexus of northeastern liberalism--seems a sustainable claim.

On the theological tip, William Wilberforce called unitarianism a "half-way house" to "infidelity," and his prediction of the aforementioned "post-Christianity" seems quite prescient.
August 9, 2015 at 5:59 PM

Jonathan said…
Much delayed, but in response to Tom--it's also true that others at the time thought so, too, not just Wilberforce. The great Trinitarian/Unitarian Battles showed that Trinitarians thought once Unitarians compromised on the Trinity, it was downhill to infidelity. For this, you could see Jedidiah Morse, several of his sons, and Leonard Woods.
September 3, 2015 at 9:32 AM