Last week, a horrible thing happened, and Matt Cressler and I (Emily) were both asked to write about it. Since this month doesn’t have a 31st (Matt’s date), he and I together took the time here to reflect on writing about the #Charlestonshooting for a public audience. Also, if you didn’t check out #Charlestonsyllabus yet (which was trending for awhile!), do so now or read this round-up of sources compiled by the African American Intellectual Society’s blog.

EMILY: When the news broke Wednesday evening about the mass shooting in Mother Emanuel, I was deeply sad. Being on the west coast, I was still up and on my computer so I watched the immediate aftermath on Twitter. The realization that it was Denmark Vesey’s church and on June 17 was a painful one. I woke up Thursday morning and now was mad about what happened. I sat at my desk and read a bunch about the shooting and the media’s coverage of it. I fumed. I thought about the all-too-neat historical trajectory from southern slavery to the night before. I yelled “Why?” at my computer a few times, even though I knew why. I read Laudato Si, the pope’s encyclical about climate change that had just been released that morning, but I couldn’t really focus on the words. The only things that jumped out to me were lines about social justice. Charleston was on my mind no matter what I did. Then I got an email about it.

MATT: I too awoke in a rage. Since I’m starting at the College of Charleston in August, friends had texted me through the night about the Mother Emanuel massacre. The news was almost the first thing I saw when I got up Thursday morning. What made this even more poignant for me was that I had just planned a class trip to Emanuel AME the day before. Wednesday morning I sat in a coffee shop drafting my African American religions syllabus for the fall. One of things that most excites me about teaching this subject in this place is the depth of African American (religious) history in “the Holy City” – something people across the country have now been awoken to tragically. That morning I typed “Special Class Visit to Emanuel AME Church” into my syllabus. I toyed with calling the church right then and there to schedule a visit, but decided against it. What’s the rush, I thought. This made it seem all the more surreal when horror visited the Mother Emanuel community that very night. 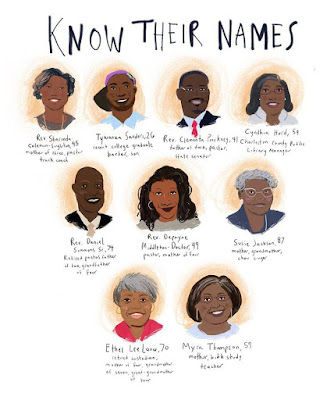 EMILY: The email I received came from the editor of Spokane FAVS, an online publication for the inland northwest that focuses on faith, ethics, and values. A colleague at Gonzaga had passed my name on, and she asked if I would write something about the shooting. I had to think about this. Did I want to put my view on the shooting out there? Not my 140-character view, but what I really was thinking. Did I want to write for the public about the shooting, and not just an academic blog, but in a publication that was geared towards non-academics? Should I write about it? With some apprehension, I said yes. The more I considered SpokaneFAVS, the more I thought about its main audience: primarily white Christians living in the inland northwest. Spokane had recently been in the news as part of an interesting scandal: Rachel Dolezal, the racially-outed NAACP leader. The inland northwest is very white with some tribal lands and pockets of militant white supremacists. It’s a region that needs to have an honest conversation about race in this country. And so I let this direct what I wrote for SpokaneFAVS. The result was “A Violent Act in the Name of White Supremacy.” I figured that a title that didn’t pull punches would be good. And while it made the rounds on Facebook and Twitter among the academic community, I wrote it with my regional audience in mind. The states of Washington, Idaho, Montana, and Oregon weren’t part of the Confederacy but that doesn’t mean they have nothing to do with Charleston. And so my op-ed ended with a call to action for white Americans everywhere: “White Americans need to do more than condemn the Charleston shooting. We need to recognize it as a product of our history. We need to face it and talk about it. We need to be quiet and listen to persons of color. Only then can all of us, whites and persons of color, try to find a way forward.”

MATT: Slate contacted me on Thursday morning, only a few hours after I’d heard the news. They asked if I could offer historical perspective on violence perpetrated against black churches. Like Emily, I had to think about it for a bit. Still in shock, I found myself torn between impulses to silence and screaming – I first felt these dueling impulses in the wake of Trayvon Martin’s murder and I’ve felt them far too often since. Silence seemed like a viable option for two reasons. The most basic was something I imagine we all experience on a regular basis. What could I possibly contribute to the conversation? I am not an expert on Charleston, after all. Hell, I’ve yet to even live there. Who am I to say anything? The urge to silence also lingered on another level; silence in the face of what Thomas Merton once termed the Unspeakable:


“one of the awful facts of our age is the evidence that [the goodness of the world] is stricken indeed, stricken to the very core of its being by the presence of the Unspeakable….[we must] be human in this most inhuman of ages.”

Obviously my impulse to speak, if not scream, won out. I felt compelled to say something, anything – especially since, at least in the immediate aftermath of the tragedy, many began to insist that there was nothing to say, that this was an isolated outburst of a crazed man, that this was “senseless.” As a scholar of American religion, I knew quite well that this attack was not aberrant, even if violence on this scale has become relatively rare. What I ultimately wrote ended up being less an historical perspective and more the perspective of an historian of religion. “Why White Terrorists Attack Black Churches” attempts to illustrate how black religious institutions have functioned simultaneously as religious and political institutions for centuries. Because of this, they have represented threats to (and become targets of) white supremacist power. So as an American, and even more so as a white American, I feel it is my responsibility recognize the Charleston shooting for what it is: “a product of our history,” as Emily so eloquently put it. I also firmly believe that it is my responsibility as a scholar of American religion. After all, this history of violence, as well as the history of African American religious communities confronting it, is American religious history.
Email Post
Labels: Charleston emily's posts Matthew's posts religion and violence white supremacy