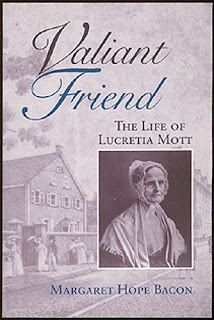 I had the pleasure of meeting Margaret Hope Bacon, who died in 2011, and her husband Allen, who died in 2013, when I was working on my biography of Lucretia Mott. Margaret, a prolific writer and historian, had published a wonderful biography of Mott, titled Valiant Friend, in 1980. The Bacons were activists. Like many of their 19th c. Quaker predecessors, this unassuming couple acted on their religious convictions to promote racial equality, peace, and other causes. With some important exceptions, including Allan Austin's recent book on the American Friends Service Committee (read Karen Johnson's interview with Austin here and here), Quakers get more attention in histories of early America than they do in histories of the twentieth century. The obituaries of the Bacons, published in the Philadelphia Inquirer, offer a starting point for further histories of twentieth-century Quaker activism.

S. Allen Bacon was a Quaker by birth, and educated at Quaker schools like Westtown and Haverford. He and Margaret met at Antioch College. Though his obituary states that the "two helped work to integrate the school," Antioch had (at least in theory) admitted African American students since the 19th century. In the 1940s, students protested and the college decided to actively diversify, recruiting both African American and Japanese American students. During World War II, Allen was a conscientious objector, and, through the Civilian Public Service program, worked with patients in a mental hospital. Afterward, he made a career of community organizing in the settlement house movement in Philadelphia.

Unlike her husband, Margaret Hope Borchardt was not born a Quaker. She grew up in New York City and graduated from Antioch College in 1943. She did not join a Quaker meeting until her three children prompted her to do so. In addition to her writing, from 1962 to 1984, Margaret worked at the American Friends Service Committee (see Guy Aiken's recent post on its archives). Her many social and political commitments included the Pennsylvania Abolition Society, which in Mott's day did not allow female members. As she told one interviewer, "I've always been interested in what motivates people to do good works. There's a spirit running through humanity that keeps producing people who have the urge to make life better for their fellow human beings." Accordingly, her list of biographical subjects include Mott, Quaker prison reformer Abby Hopper Gibbons, and African American abolitionist Robert Purvis. For future historians, she left her abundant research materials to the Friends Historical Library.

One of the Bacons' last causes was the preservation and restoration of a historic (and integrated) Quaker cemetery in Philadelphia, the Fair Hill Burial Ground. The list of individuals buried there is impressive, and includes Lucretia and James Mott, Robert Purvis and his wife Harriet Forten Purvis, Thomas and Mary Ann M'Clintock, signers of the Seneca Falls Declaration of Sentiments and founders of the Congregational Friends, and Abby Kimber and Sarah Pugh, members of the Philadelphia Female Anti-Slavery Society, who traveled as delegates to the 1840 World's Anti-Slavery Convention. Some of Mott's children and their spouses are also buried at Fair Hill.

But Margaret was an activist as well as a scholar. When she wrote about Mott's grave at the end of Valiant Friend it had a purpose: "All around are houses that look as though they have been bombed, doors and windows gaping open or temporarily boarded up with sheets of metal. Abandoned cars sit on their axles at the curbs. Garbage, trash, and graffiti are everywhere. In the midst of the desolation a few black and Puerto Rican children play." As Margaret stood there, appreciating the sunshine, listening to the children, and communing with the dead, she heard a question from Lucretia: "What is thee doing about it?" So she and Allen did something.

Carol Faulkner said…
Guy Aiken pointed out the the Bacon family papers are at Haverford College. The finding aid is here: http://library.haverford.edu/file-id-1062. Thanks Guy!
July 6, 2015 at 10:34 AM