Conservative vs. Liberal or Evangelical vs. Churchly?

I recently reviewed Timothy Gloege's very fine book Guaranteed Pure: The Moody Bible Institute, Business, and the Making of Modern Evangelicalism for Christianity Today. (You can find that review here.) I'm still thinking, though, about a framing move Gloege makes in his introduction that could be useful for scholars writing on a variety of topics. Gloege writes on p. 13, 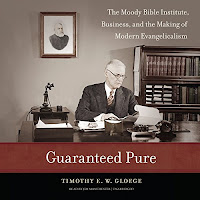 There are several things I really like about this reframing and a few I'm not so sure about.

First, I completely agree that individualism is central to evangelicalism, while a specifically churchly communalism is central to liberal, mainline, or whatever label you want to use to describe non-evangelical and non-Pentecostal white Protestantism. As Randall Stephens pointed out earlier this week, for evangelicals, sin is a personal problem to be addressed one heart at a time. In Gloege's book, this individualism relates to consumer behavior, the sovereign shopper's ability to choose the religion (or, for reasons that will become clear if you read the book, the oatmeal) she deems most suitable for her needs. Evangelical ecclesiology tends to the atomized, "wherever two or three are gathered" approach. Individualism of the Sheilaism sort aligns with liberal religion, but not with liberal Protestantism, which attends fastidiously to church polity. All of this explains why headlines are apt to feature evangelical personalities but liberal/mainline institutions.

I'm also totally on board with Gloege's assertion that a subset of fundamentalist and evangelical Protestants claiming the "conservative" mantle constituted a rhetorical coup. There were, and are, lots of conservatives in the churchly world, but they disappear in the common evangelical/liberal dichotomy. Additionally, the "conservative" label obscured the remarkable inventiveness of fundamentalists and their neo-evangelical heirs. These Protestants eagerly grasped technology and principles of business organization. They swooned over modern quantification. (For more on this topic, see B.M. Pietsch's hot-off-the-press Dispensational Modernism.) And they developed a knack for advancing new theological interpretations that they billed as timeless truths.

Take biblical creation as an example. I was shocked to learn, in a graduate seminar, that the textual notes in the 1917 Scofield Reference Bible were pretty vague on the timing of God's creation. Each "day" of Genesis 1-2 might have been a solar day, the notes claimed, or it might have been a longer period of time. Yet during my freshman year at Wheaton College, the entire faculty was told by the president to affirm the "biblical" teaching of seven-day creation or seek employment elsewhere. (The faculty successfully fought this injunction, and I got a crash course in the politics of both evangelicalism and higher ed.) The novelty of seven-day creation was likely raised by faculty members, but I remained unaware of it until that grad seminar.

Despite my own experience, I'm not sure I buy Gloege's dismissal of the attitude toward tradition as a sorting mechanism for Protestants. I think I see this matter differently because he and I studied different early twentieth-century Protestants. His guys claimed to be old-fashioned while they were actually being quite innovative. My guys at the Christian Century claimed to be progressive, historically conscious, and open to new revelations, and they generally were, though the churchliness of their milieu slowed them down considerably. Perhaps, in terms of openness to change over time, "conservative" Protestants weren't genuinely conservative, but "liberal" Protestants were genuinely liberal.

Or perhaps it depends on what change, specifically, you're talking about. Some components of conservative evangelicals' old-time religion were new (notably, dispensationalism), some had a long pedigree as at least a minority view within Christianity (for example, penal substitution as the theology of atonement), and some were verifiably ancient (for example, belief in miracles). Self-styled liberal Protestants rejected dispensationalism, substitutionary atonement, miracles, and much else that mattered not just to twentieth-century conservative evangelicals but to eighteenth-century evangelicals and sixteenth-century Protestant Reformers and plenty of Christians before them. Attitude toward tradition might have been, as Gloege argues, logically and practically independent from individual vs. communal orientation, but it was an important disagreement among early twentieth-century Protestants, and it did in many ways separate those commonly called conservatives from those commonly called liberals.

Even though I'm not 100% convinced by it, I think Gloege's unbundling of often-fused concepts could be useful in areas other than early twentieth-century Protestantism. Goodness knows that "liberal" and "conservative" camps pop up all over, and it would be helpful to ask in these instances, Is it really attitude toward tradition that divides these folks? Which traditions? Might something else describe their differences better? What novelties lurk beneath the "conservative" label, and what continuities provide ballast for the "liberals"? I'm generally not a fan of ditching familiar terms and categories, especially when those terms and categories appear in the relevant primary sources, but we all do well not to take them at face value--particularly, as in Gloege's study, when the terms are wielded by astonishingly successful marketers.
Email Post
Labels: 20th Century books elesha's posts Elesha’s posts evangelicalism evangelicals and business liberal Protestantism

Thanks for this thoughtful post and for pointing us to your excellent review of an excellent book. Of course, I'm sympathetic to efforts to challenge the "conservative-liberal" dichotomy, especially along lines as you suggest. As you know well, "liberals" like Morrison were so troubled by the individualism in evangelicalism that, in his 1940(?) book What is Protestantism?, he declared the whole movement a heresy for its neglect of the communal nature of Christianity. It would be a understatement to say that Morrison then did not make the logical move of returning to Catholicism (although he had a few nice things to say about Anglicans in the book). However, as I detail in my book, alot of Morrison's pastoral and theological associates elsewhere were imagining themselves as harbingers of a reunion of Christendom--an "evangelical catholicism," as some called it. Morrison's successor as CC editor commented on this "catholicizing" of the mainline in an article from 1950, I think entitled "American Protestantism at Mid-Century."

My point is that the anti-individualist, anti-consumerist "churchly" evangelicalism emerging in the 1920s as a counter-balance to MBI looked to more than business models of organization. Their "conservative" orientation was best evident in their interests in high-church forms of doing Christianity.

Perhaps it is time to have an open discussion about the terminology we use to make sense of these groups; maybe at the ASCH in Atlanta? :)
June 19, 2015 at 6:29 AM

Randall said…
Enjoyed reading the post and I look forward to getting the book when Hilde and I are back in the UK.

I think many of these political and theological distinctions have to do with the period being studied. 1910-20 is quite different from 1950-60 or 60-70.

Here's an interesting Natl Assoc of Evangs statement on funding public education that I just ran across in the Nazarene youth magazine Conquest (Sept 1957, p56):

"Our public schools are becoming increasingly secularized and, in our judgment, federal aid would facilitate this tendency. Federal aid is a departure from our traditional American position of individual responsibility and growth, and tends toward socialism, the first step toward totalitarianism. Federal aid to education would open the avenue to federal control, and thus enable the extremely liberal educational elements in UNESCO to forward their anti-Christian program including the elimination of Christian schools."

Anonymous said…
Belated thanks for this fantastic post Elisha. I love it. There are so many productive directions to take the discussion it's hard to know where to begin. It probably deserves a blog post rather than a comment.

I appreciate your highlighting my desire to shift the conversation by using the term "churchly" as an opposite anchor of "evangelical." But to clarify, my intent is not to replace one set of binaries with another (as the "or" in the title of the post might imply). Rather, I'm suggesting that we add it as another variable to the mix (and actually I suggest a third, class). So it's liberal/conservative AND evangelical/churchly. Both properties are defined and function independently. Equally important, I want to dispense with theologically-defined binaries. Instead, I want to think of these as positions on a continuum, as X and Y axes, with many gradations. And they are orientations rather than systematic doctrines or creeds.

This opens the way for us to talk about both the longstanding tensions AND the co-existence/cooperation/borrowing among four groupings of Protestants. This includes:
1) churchly conservatives and conservative evangelicals--tensions that I trace throughout the book
2) conservative evangelicals and liberal evangelicals--not only the well-known tensions, but also borrowings (i.e. in Torrey's theology and practice).
3) evangelical liberals (and here I mean bona-fide theological liberals who were individualistic, etc.) and churchly liberals (who held church and denomination in high esteem).
4) churchly conservatives (who by definition were bound to their denominations) and churchly liberals.

This liberal side to the story is largely unexamined in the book, but I hope to see if the hypothesis stands in my next project.

Finally, I'm glad you brought up the fact that self-described liberals and conservative evangelicals had substantial doctrinal differences. This is important to remember. But I'd also say that just because two groups have incompatible beliefs does not mean that one of them must be "conservative" in any historic sense. Conservative evangelicals not only added things like seven day creationism and dispensationalism, they also dispensed with (or demoted) beliefs and practices that were once seen as essential to most "respectable" Protestants in the nineteenth century.

This act of choosing, I argue, is key. The fact that someone uses pre-existing pieces of glass to create a picture rather than paint on a blank canvas does not make it any less artful. Both the churchly liberals you studied and conservative evangelicals I looked at made choices about what to preserve and what to dispense with. But I'm not convinced that either has a stronger claim to being traditional. It’s the churchly conservatives who have the right to that claim.

None of this does full justice to all the points you raised, but hopefully we can continue the conversation down the road. Thanks again and I look forward to this sort of thoughtful engagement in the future.
June 21, 2015 at 7:43 PM