Skip to main content
Labels
Posted by Elesha May 19, 2015

Religion and Advertising in the 1970s 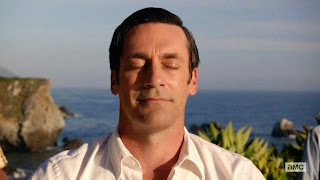 As soon as the Mad Men finale wrapped up Sunday night, my religion nerd friends started chattering about how one might teach the episode in a class. (If you have not watched the episode, stop reading now. Actually, you'd better just step away from the Internet for a few days.) It occurred to me that we were not the first clever folks to spot deep connections between advertising and spirituality in American culture. Religion-minded folks in the 1970s probably noticed, too.

Here, then, is a quick roundup of short archival resources one might use when discussing the confluence of Esalen, Coca-Cola, and Don Draper's eternal return. You're welcome.

On the essential incompatibility between moral earnestness and commercialization:

"You probably saw it too--the hour-long Simon and Garfunkel TV program around Christmas time [1969]. I think Simon and Garfunkel songs are very good. But what struck me about the TV program was not the songs, nor even the ads, but the amazing contrast between the songs and the ads. Fifteen minutes of sensitive, probing folk songs, and then a hair spray ad. Then fifteen more minutes of strong songs protesting a sick society with its priorities grossly out of order, and then another hair spray ad: For the woman with never a lick out of place. ...

"That seems to be our way with dissent in our society. We don't seriously respond to it. Nor do we seriously try to stamp it out. We muffle it by giving it commercial value."

On the implicit theology of advertising:

"What may surprise us is that the average consumer hasn't the slightest notion he or she is receiving theology through their favorite ads for brandy, swim suits, panty hose, shampoo or beer. The consumer, in fact, does not reflect upon the form of the communication, or upon its content, at all. The ads work as the liturgy presumably worked once upon large Christian communities throughout Catholic Europe: effortlessly, holistically, and economically as only the commonplaces of a cohesive language arrangement can work. They require no critical reflection.

"The words work because they mirror true needs and goals shared by the general populace. Our fellow citizens do want above all else to be natural, honest, 'themselves,' all summed up in the remarkable word, 'real.' When we are natural and real, we shall be cool, smooth, or in command. When cool and in command, we shall be beautiful, good, alive, and show it through our looks.

"Being beautiful, good, alive, honest, and cool, however, have little to do with a Christianity hooked on sin and grace. From the ads we learn that our fellow citizens want to be at one with themselves--whatever that mystery may mean in our culture."

More on the commercial appeal of "natural beauty"

"Two young people of opposite sex pause in the midst of urban bustle--say, at a crowded Boat Show; they light up, look at each other, and momentarily they are at-one, alone, redeemed, at peace in the Garden, between sylvan hills on a lake as yet unpolluted. Scenes of this sort advertising a particular brand of cigarette have been with us for a couple of years now--which means that the people responsible for promoting sales find this gambit successful; otherwise it would be dead, like 'Ask the Man Who Owns One,' or 'Blow Some My Way.' This one works. So while there is yet time--before tobacco ads are banned from TV as of the first of the year [1971]--let us consider what motifs are so moved in us by the claim that You Can Take Salem Out of the Country, But -- You Can't Take the Country Out of Salem. ... 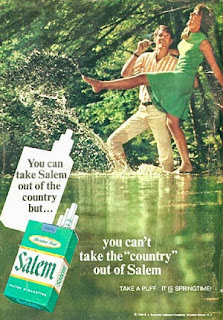 Salem? Yes: the place the Lord of History had set aside and preserved for his chosen until the time should be right for them to claim it, thereby restoring His Church--and thereby destroying, in the name of History, 16 centuries of ecclesiastical history. We have long been ahistorical, which is to say asocial. American man is redeemed by stepping outside History/Society and going it one-to-One in the Purity of Nature, just as in the Salem cigarette advertisement--Salem as in Jerusalem, the City of God.

Now it is probable that the advertisers  did not intend this irony, but only chose to name their product for the twin city of Winston, for which latter a brand in successful circulation was already named; and they did not really mean to imply that these were especially sacramental smokes which better than other brands would achieve at-one-ment for the user. Yet they did happen on this Catholic irony (the Evangelical equivalent would be a brand called Jesus, but I don't look for that), and they have hardly disavowed it. This particular cigarette will return one not to a particular historic time and place--to a Near Eastern suburb or medium-sized city in 30 A.D. to watch a sweaty and brutal crucifixion--but to Nature, which is pure and therefore nonhistorical; or else, being nonhistorical, is therefore pure."

Plus: A 1972 classroom exercise about advertising and alienation

"An upper level Humanities course is organized around the phenomenon of alienation. ... The class reads 'Alienation and Capitalism,' by Erich Fromm, an article the anthology, Man Alone, edited by Eric and Mary Josephson (Dell). We discuss Fromm's notion of an alienated consumer. He says, for example, that


consuming is essentially the satisfaction of artificially stimulated fantasies, a fantasy performance alienated from our concrete, real selves. ... Our palate, our body, are excluded from an act of consumption which primarily concerns them. We drink labels. With a bottle of Coca-Cola we drink the picture of the pretty boy and girl who drink it in the advertisement, we drink the slogan of "the pause that refreshes"; we drink the great American habit; least of all do we drink with our palate.

"The class is stimulated by this argument and begins exploring its ramifications. They come up with a stream of their own examples. The room is moving, loudly, excitedly--but all in one direction. It occurs to me that we really lack some sincere and articulate opposition.

"'It would be good to hear from some advertising men on this one,' I comment, and am immediately greeted with resentment. 'An advertiser's response would be hopelessly predictable,' seems to be the unanimous opinion.

"'Why don't we write them?' I say. ... I tell them I am tired of reading their papers and that it is time to share their work. All I want are carbon copies of letters which are to be in the mail by the time I read them.

[Students wrote to execs at major firms and received lots of letters back, including one from someone at Coca-Cola:]

... Were the implications made by Mr. Fromm unalterable facts, I would be greatly disturbed by what he writes.

Thank God, each of us has the freedom of choice to decide what is most gratifying to his individuality and can select only what is most 'palatable' for consumption, even if it is "The Real Thing--Coke"!

I am taking the liberty, Miss Sinclair, of enclosing an article called "Focus On Thirst," which explains one of mankind's greatest needs is that of satisfying his thirst. ...


"These days when a class discussion advances so far as to exhaust its available resources--whether we are talking about the decline of institutionalized religion or care of the elderly--it is not uncommon to hear some voice other than mine suggest, 'Let's write some letters!' Not since the first day of class--when the boys sat in one clump and the girls in another, prompting us, after a brief explanation of the course, to get up and try again--has a problem in alienation been solved with results quite so immediate, so ongoing, or curious-making."