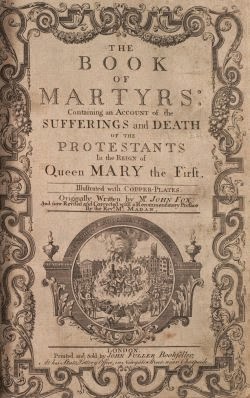 The recent horrific beheading of 21 Coptic Christians in Libya makes me long for many things, foremost among them, of course, an end to the wrenching violence in that region. In an academic vein, the event and the many responses to it filling my digital media stream make me wish that the Princeton "Lives of Great Religious Books" series, or something like it, offered a history of Foxe's Book of Martyrs. I suspect that the ways we in the West process acts of religiously inflected terrorism continue to be shaped by this much-updated and reprinted martyrology, but a morning's search for information on its influence beyond England turned up surprisingly little. Yet my small university library holds multiple copies, and I can find excerpts or whole texts on numerous websites. This book of bloody death lives on in our collective imagination.

A comparison of the prefaces from an early (1563) and a late (1838) edition indicate some changes and some points of continuity in white, Western, Protestant thinking about the religious others who subject followers of the "true faith" to torture and slaughter.

English historian/polemicist (his categorization continues to be debated among scholars) John Foxe published the first English edition of his Actes and Monuments just a few years after the reign of "Bloody Mary" Tudor, whose policies had added so many victims to Foxe's roster of persons killed for their Christian faith since biblical times. He directed a preface "To the Persecutors of God's Truth, Commonly Called Papists," in which he called on his enemies to behold their own despicable acts and learn to detest them. In addition to lamenting their wanton violence against men, women, and children, Foxe accused the papists of sexual immorality ("unmaidenly lives"), misreading their own Scriptures, and continuing the baleful customs of patently unworthy authorities (including Innocent III, blamed for teaching transubstantiation, and Boniface I, blamed for his declaration of papal supremacy). As if all this weren't bad enough, Foxe claimed that the papists were fighting a self-destructive battle that they ought to cease for their own good:

"Let us compare now your winnings and losses together. And as you have gained but a little, so let us see what great things you have lost; which, first, have spilt your own cause, the quiet of your conscience--which I dare say shaketh within you. Ye have lost the favour both of God and man, the safety of your souls, and almost the kingdom of the Lord, except you take the better heed. What think you, then, by these your proceedings, to win any more hereafter, which have lost so much already? Do not the very ashes of the martyrs you have slain rise up still against you in greater armies? ...

"For see you not daily more and more the contrary part (the Lord's arm going with them) to grow so strong against you, that not only is there no hope, but no possibility for your obstinate error to stand against so manifest truth? First, learning, and all best wits, for the most part repugn against you. Most nations and kingdoms have forsaken you. ... Moreover, universities and schools, in all quarters, to be set up against you; and youth so trained in the same, that you shall never be able to match them."

I do not mean to suggest that these elements of argumention--the appeal to conscience and a right reading of holy writ, the critique of bad leaders from the past, the claim that all learned people are united on what will surely be the winning side--originated in the Book of Martyrs or are uniquely white, Western, and Protestant. But the elements were there in this 450-year-old document, and they persist in Western responses to religious terrorism today.

There was one major change from the earliest to the latest English editions regarding the definition of the "other." For Foxe, papists were evil because they were papists. The author of the 1838 preface was more willing to see evil as potentially pervasive, a problem for "us" as well as for "them":

"In all ages, we find that a disposition to persecute for opinion's sake, has been manifested by wicked men, whatever may have been their opinions or sentiments on religious subjects. The intolerant jew, and the bigoted pagan, have exhibited no more of a persecuting spirit, than the nominal professor of christianity, and the infidel and the avowed atheist. Indeed, it seems to be an 'inherent vice,' in unsanctified nature to endeavour by the pressure of physical force, to restrain obnoxious sentiments, and to propagate favourite opinions. It is only when the heart has been renewed and sanctified by divine grace, that men have rightly understood and practised the true principles of toleration. We do not say that none but real christians have adopted correct views respecting civil and religious liberty;—but we affirm that these views owe their origin entirely to christianity and its genuine disciples."

Tendencies toward rightness and wrongness remained in this view, but the line between them was no longer strictly confessional. Papists erred not just in being papists, but in embracing ignorance and intolerance: "Moreover, the papal system has opposed the march of civilization and liberty throughout the world, by denouncing the circulation of the Bible, and the general diffusion of knowledge. Turn to every land where popery predominates, and you will find an ignorant and debased peasantry, a profligate nobility, and a priesthood, licentious, avaricious, domineering and cruel."

Also, in the updated 1830s martyrology printed in the United States, the threat had become migratory:

"This is the religion, to diffuse which, strenuous efforts are now making in this country. Already the papal church numbers more than half a million of communicants. This number is rapidly augmenting by emigration from catholic countries, and by the conversion of protestant children who are placed in their schools for instruction. The recent events in Europe, will, no doubt, send to our shores hundreds of jesuit priests, with a portion of that immense revenue which the papal church has hitherto enjoyed. Another thing, which will, no doubt, favour their views, is the disposition manifested among some who style themselves liberalists, to aid catholics in the erection of mass houses, colleges, convents and theological seminaries. This has been done in numerous instances; and when a note of warning is raised by the true friends of civil and religious liberty, they are treated as bigots by those very men who are contributing of their substance to diffuse and foster the most intolerant system of bigotry, and cruel, unrelenting despotism, the world has ever seen. Other sects have persecuted during some periods of their history; but all now deny the right, and reprobate the practice except catholics. The right to destroy heretics, is a fundamental article in the creed of the papal church. And wherever her power is not cramped, she still exercises that power to the destruction of all who oppose her unrighteous usurpation."

The religious other--here, Catholics; now, Muslims--is growing and spreading. Their efforts are well-funded, and our own liberals are foolishly helping them build their edifices. Ominous events are happening in Europe. Everyone has stopped persecuting heretics except these bigoted despots. It all sounds too familiar.

Again, I'm not trying to trace responses to religious violence and the "othering" of religious enemies to this one book. Lots of historical events relate to the present, including the Crusades, colonialism, and lynchings across the American South. Still, on the specific point of making sense of martyrdom, of placing new deaths within a larger narrative framework and deciding how to think about the people who cause these deaths, I think Foxe's book is relevant in ways that I wish I better understood.

Anonymous said…
Great post! I'm working on a history of Foxe's influence in the US. I hope to answer some of the questions you asked.
February 20, 2015 at 3:03 PM