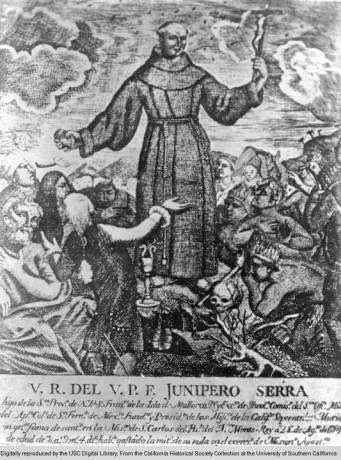 Pope Francis recently announced his intention to canonize Junípero Serra (1713-1784), the Franciscan friar remembered for his work among California Indian nations. From 1769 to 1782, Serra founded nine missions in California. Serra has been hailed by some as California's founding father and reviled by others due to his treatment of Native Americans; the pope's announcement has thus received mixed responses.

Catholic news agencies such as the Catholic News Service have noted how surprised--and pleased--Serra's supporters were to hear this news, even while recognizing the contested nature of Serra's legacy. Steven Hackel, a professor of history at the University of California Riverside and author of books on Serra and the California missions, suggested that this moment might help to increase public dialogue about California's colonial history. Meanwhile, Indigenous leaders such as Anthony Morales, Chief of the Gabrielino Tongva Band of Mission Indians, highlight the destructive nature of the mission system for California Indians and argue that the pope should reverse his decision.

Coinciding with this news, I thought I would share a CFP from the Comparative Approaches to Religion and Violence AAR program unit. While the geographical scope is open, historians of American religion, including those looking at the legacy of missions for Native American religions, might be interested in participating in the conversations this unit promotes.

For the 2015 national conference of the AAR, we seek papers that examine the intersections of religion and violence, with attention to the condition in which religion lends itself to the justification and/or promotion of violence. Papers should demonstrate comparative or theoretical approaches. Below are recommended themes within this framework:
1.   Religion, Law and Violence: a look into the role of international law, humanitarian law, and regulations of interventions such as in the Middle East. If you are interested in submitting to this theme, please contact Nathan French (frenchns@miamioh.edu) and Gregory Reichberg (greg.reichberg@prio.org).

2.   Ethnographies of Religion and Violence: contemporary ethnographic analyses that track intersections between religious actors and violence, such as the role of religion in prisons, religious leaders in warfare, religiously motivated soldiers, or religious nationalists that foment violence. For possible panel inquiries, please contact Ryan Williams (rjw202@cam.ac.uk).

3.   Comparative Ethics of Violence beyond Texts: We seek studies that trace the way that religious authority becomes enacted outside of traditional scriptural mandates, such as by cultural leaders, rituals and media. For possible organized panel inquiries, please contact Torkel Brekke (torkel.brekke@ikos.uio.no).

4.   Martyrdom: We invite examinations into martyrdom as a performative, disputed, and celebrated category.

In addition to these themes, we are soliciting papers for four co-sponsored sessions:
1.   Children, Violence, and Religion: This open session invites submissions that investigate violence by or toward children in "religious" contexts. Papers may address any form of verbal, psychological, or physical violence, real or imagined. Such violence might represent a normative requirement for entry into a given religious community, it might involve the use of child soldiers, child suicide missions, child sacrifice, or it might represent a despicable crime imputed to the religious Other, as in accusations of the ritual murder of children in antiquity or in medieval Europe. Papers may address evidence from any historical setting, from ancient to contemporary. This panel is co-sponsored by the SBL unit “Violence and Representations of Violence among Jews and Christians.”

2.   Religion, Ecology and Violence: we seek papers that examine cases such as eco-terrorism, environmental conflicts around extractive economies in Africa and Latin America, and the relationship between Islamism and petroleum economies. This panel is co-sponsored with the “Religion and Ecology” program unit.

4.   Cognitive Science of Religion and Violence: analyses of religion and violence through cognitive science methods and approaches.

In addition to these suggested themes and collaborations, we welcome other submissions that fall within our program unit’s mandate.
Email Post
Labels: AAR cfp missions Native American religions religion and violence