Finding Religion at "The 1968 Exhibit"

In Maurice Isserman and Michael Kazin’s America Divided: The Civil War of the 1960s, a chapter devoted to the year 1968 and a chapter on religion sit side-by-side. Chapter 12, “1968,” opens as follows: “Significant change seldom respects the calendar. But, on occasion, a single year fills up with revolutions--attempted and dreaded, imagined and repressed. [...] 1968 was that kind of year.” The authors go on to call 1968 “the pivot” of the decade. The following chapter, entitled “Many Faiths: The ‘60s Reformation,” opens with similar drama: “Nothing changed so profoundly in the United States during the 1960s as American religion.”

The opening lines of both chapters describe their subjects in exceptional terms, and both subjects are positioned as symbolic or characteristic of the decade as a whole. Yet when read alongside each other, it is difficult to ignore the fact that these two exceptional subjects barely speak to each other. Virtually nothing that might normally appear on our radars as “religious history” is found in the authors’ treatment of 1968, save the religious ghosts alluded to while recounting the assassination of Martin Luther King, Jr. In the chapter on religion, 1968 is explicitly referred to only once, as the year of Pope Paul VI’s issuance of Humanae Vitae. Many of the developments described there - Jewish renewal and the havurah movement, the effects of Vatican II, and the “dizzying fragmentation of the religious landscape,” to name a few - clearly include 1968 in their long spans, but none anchor themselves upon that “pivot” of the era. The momentousness of 1968 and the “reformation” of religion in the Sixties appear to have no obvious or concise point of intersection. Isserman and Kazin are not unique in this potential disjunction, as even longer, dedicated histories of 1968 rarely pay much attention to religion in their narratives.


One might argue that this is unsurprising or even uninteresting, but the observation recurred to me as I walked through The 1968 Exhibit at the Chicago History Museum last month.* A collaboration between several prominent museums supported in part by the National Endowment for the Humanities, the exhibit has been presented at museums across the nation for several years. As a student whose work has come to focus on the long 1960s, the exhibit had immediate interest for me: how might a museum depict, in a single exhibit, a year whose very name is so evocative, so symbolic of a larger span of time, a year that continues to provoke controversy in historiography and popular memory alike? And I was especially interested in seeing where, if anywhere, matters of religion might appear in such a presentation. While many excellent exceptions may be noted, the bulk of the literature on the Sixties either ignores religion as a subject of interest, or cordons religion off into its own specific narrative. Would the same hold true for The 1968 Exhibit? If so, does that mean anything?

The exhibit (and its accompanying book) is organized chronologically, with the occasional section devoted to matters of culture that were more broadly representative of the year as a whole (especially popular music, fashion, and entertainment). It is visually stimulating and often quite thoughtful in its layout. Consider its entry point: you walk into a recreated living room that feels fashionable and comfortable in appearance, until you notice the dramatic television running news footage on the Vietnam War. The next section takes you from the safety of home into the trauma and drama of war: a reconstructed “Huey” helicopter carries an interactive multimedia set, where visitors can watch and listen to a range of voices discuss Vietnam and the Tet Offensive. While not every section of the exhibit carries the visual effect of a reconstructed helicopter, organizers have gathered clothing, political buttons and posters, photographs, and an endless array of miscellania from the period to tell the story of 1968 and its many tumultuous events, and to immerse the viewer in that year. It is apparent, too, that the exhibit’s organizers worked hard to tell a story of culture and American identity as much as of politics and protest. While the bulk of the exhibit runs through the standard canon of the year’s key events, comments from “everyday” voices and less-prominent personalities dot the walls; their quotes often suggest how ‘68 was formative to their understanding of themselves, their time, and the nation’s experience. A series of panels dedicated to emerging liberation movements lead to the last section of the exhibit: another living room setting: this time, a television replays footage from Apollo 8’s orbiting of the moon on Christmas Eve, complete with the shuttle’s crew reading from the first verses of the book of Genesis. 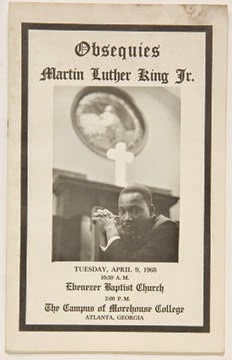 And what of religion? While various recognizable manifestations of religion lurked in the background of the exhibit, it rarely surfaced as a subject of clear significance or impact. Its most obvious appearance came through a large section focused on Martin Luther King, Jr, and his assassination. The feature video opened with a voiceover from Vincent Harding, who discusses King’s willingness to take Jesus “seriously,” and describes King’s belief that in order to get closer to the divine, one must get closer to the “outcasts of society.” Further material related to King forms a constellation through which his religious identity is articulated. Audio from King’s final speech features clear references to Christian thought. Haunting strains of “Precious Lord, Take My Hand” closed out the film. The cover of the funeral program featured a portrait of King, hands folded as to suggest a gesture of prayer, with an out-of-focus cross in the background providing the actual centerpoint of the image (King featured below it). Next to the program was a communion plate from the funeral.

The remaining references to religion were few and usually indirect. The work of the Catonsville Nine is noted on a timeline for May, and the involvement of the Berrigan brothers and Thomas Melville is highlighted. An image of participants from the Poor People’s Campaign shows one holding a large sign that reads “Christian Methodist Episcopal Church.” As in Isserman and Kazin, Humanae Vitae gets a nod on the July timeline. The really observant visitor might note that a poster advertising a speaking engagement for Bobby Seale lists the venue as “201 S. Ashland (the church),” a reference to the city’s historic Church of the Epiphany. Did I miss anything? Probably, but that is suggestive of how sporadic such references are, and how incidental they seem to the exhibit’s main features and larger narratives.

The question, of course, is whether it matters that religion is referenced so minimally. I emerged from the exhibit feeling ambivalent on this point. To begin with, religious history in the 1960s is rarely told through specific dynamic events. The upheaval so often described in the literature hinges less on distinct moments of dramatic conflict than on long-scale, subtle processes that lack a central figure or date. Additionally, while it may be harder to pinpoint religious events of national significance in 1968, religious history might come more easily into one’s purview if we expanded the lens to 1969 and beyond, thus treating ‘68 as a turning point affecting changes and responses rather than a bounded year of interest in itself. This previous post from Karen Johnson concerning Catholic engagement with issues of race suggests as much; think, too, of the Black Manifesto, the forms of activism and protest it inspired, and the extent to which religious institutions were implicated and caught up in those developments. Even here, however, we would do well to cast our scope backward as well as forward, as such events are symptomatic of longer, subtler changes at work.

Perhaps even more importantly, to go looking for religion by counting references to religious leaders, communities, beliefs, or institutions is problematic, insofar as it assumes that these vehicles are the best markers of some thing called religion. The better question may be to ask where, how, and why these markers appear, and to consider what work they do in both the history being portrayed and in the portrayal itself. Why, for instance, does King receive the most obvious marks of religiosity in this exhibit, whereas none of the features concerning Cesar Chavez note his complicated yet compelling relationship with religious communities and rhetoric? Is it significant that the Berrigans and Thomas Melville are clearly identified in their accompanying placard as priests? Or that Apollo 8’s crew reading from Genesis is so prominently displayed, but the text’s import seems almost taken for granted? What does it mean that certain markers are so easily identified as “religious,” while, say, the ritualistic and communalistic aspects of “secular” protest are not? (Indeed, a broad spectrum of commentators from the period often remarked on the quasi-religiosity of student, New Left, and countercultural activities.)

This is not to say that to go looking for religion in such an exhibit, or by extension in a given year or era, is a pointless exercise. On the contrary, it encourages a great deal of reflection. In the case of The 1968 Exhibit, the portrayed narrative echoes an observation by Isserman and Kazin, who note that the period’s “most familiar images … depict Americans protesting, dancing, taking drugs, or fighting a war--anything but praying.” To count a mere handful of religious references in an extensive exhibit might seem to support the well-founded idea that both popular memory and scholarly interpretations of the Sixties often sidestep matters of religion. Perhaps what one should come away with, however, has less to do with the quality of the exhibit or with the presence/non-presence of religion in a given time and place. Exhibits like 1968 offer an opportunity to think about how assumed markers of religion operate both historically and historiographically. Considering the place of religion in an exhibit such as 1968, we might find ourselves encouraged to think more critically about what we study, how and why we study it, and how our own processes of selection inform the shape of religion in the larger stories that we tell in our teaching and our research.

* Images, timelines, and other material concerning the exhibit can be found at its website. Although the Chicago presentation closed recently, it will be presented during 2015 in Denver, Colorado, as well as in Santa Ana, California. The logo and program images on this page were borrowed from the National Constitution Center's website for the exhibit; the center presented The 1968 Exhibit in 2013.
Email Post
Labels: 1968 The Sixties