Mapping the Western Sephardic Diaspora in the Caribbean

Deep in the Surinamese jungle lies the ruins of what was once the prospering plantation town of Jodensavanne--Jew's Savanne.  Just past the bricks that made up Beracha ve Shalom ("Blessings and Peace") synagogue, are two early cemeteries--one Jewish (below), one African.  Deeper into the forest lies a third cemetery, the Cassipora Jewish cemetery.  All three cemeteries harken back to the sepulchral traditions of ancestral homelands even as they adapted to changes in what it meant to be Jewish. As such they are a good example of both religious continuity and change within American religion.
Whereas the Creole cemetery employs what some have argued are African symbols (below), the Jewish cemetery of nearby Cassipora Creek (right) features pyramid-shaped tombstones that echo those found in the Sephardic cemeteries of London, Amsterdam, Hamburg, as well as medieval Spain.  Indeed though they are separated by a jungle and ocean from their European analogues, Jodensavanne and Cassipora's Jewish cemeteries share many of their key features with Europe's Western Sephardic cemeteries.  Both Cassipora and Jodensavanne's Jewish cemeteries for example feature the striking symbol of the Hand of God, cutting down the tree of life. This symbol can also be found not only in the Western Sephardic cemeteries of London, Amsterdam, and Hamburg, but also in those in Paramaribo, Jamaica, Barbados, and Curaçao.


What makes the "Hand of God" symbol (right) particularly interesting is that it appears to violate the Second Commandment, which prohibits "any likeness of anything that is in heaven above, or that is in the earth beneath, or that is in the water under the earth." Although the symbol is occasionally imitated in the Ashkenazi cemeteries of the same regions, the Hand of God symbol--like the pyramid stone brought from Iberia and the use of biblical scenes--it is part of the distinctive cultural legacy of Western Sephardic Jews.  Connections between this early American plantation town and Germany's Jüdischer Friedhof Altona are an important reminder that before the mass migration of Ashkenazi Jews from Germany in the 1840s, German American Jews were just as likely to be Sephardic (Spanish-Portuguese) as Ashkenazi.  The presence of the three cemeteries also speaks to changes in Jewish communities and practice in Caribbean basin. 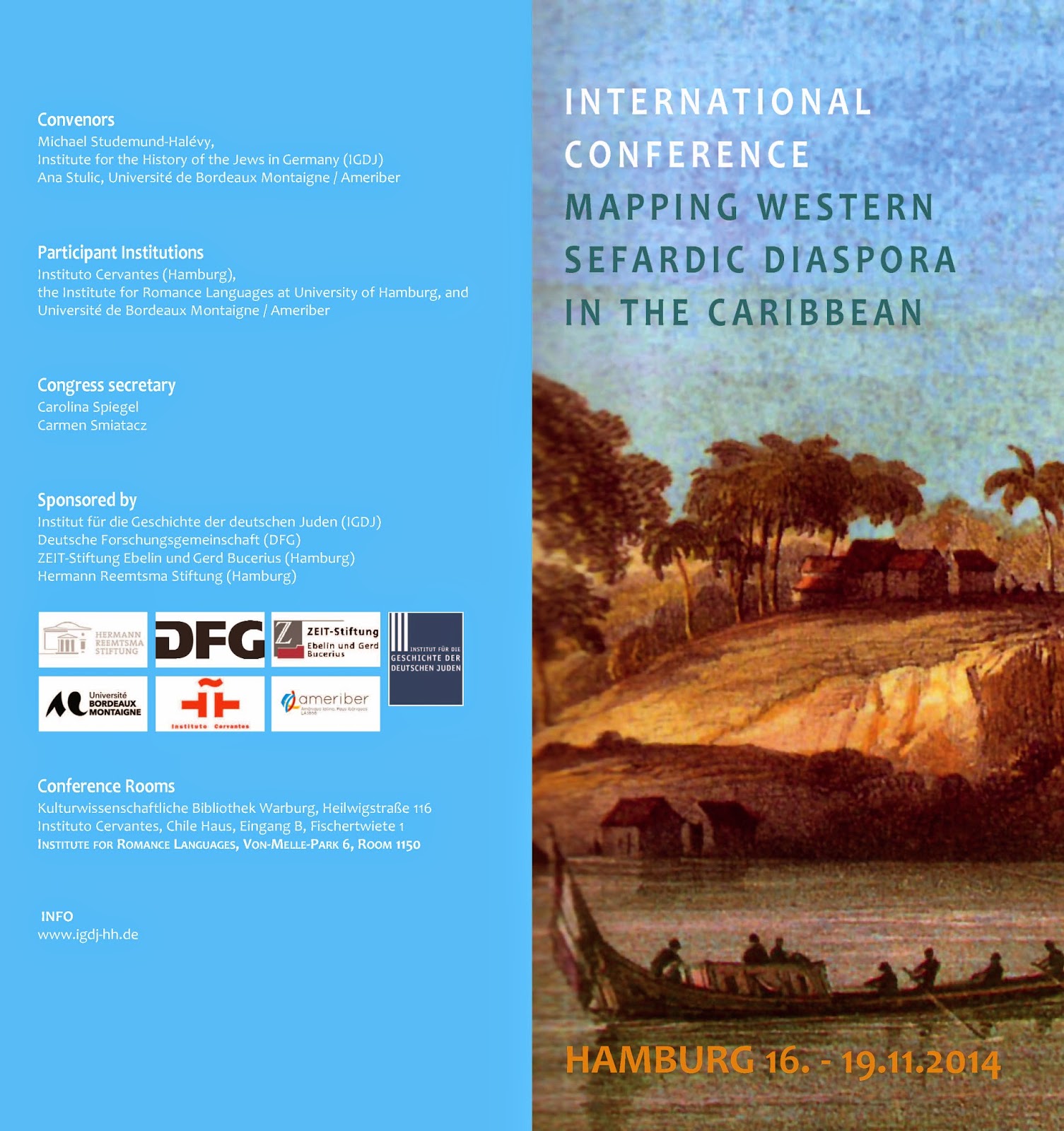 This past week I was in Hamburg, Germany attending a conference on "Mapping [the] Western Sephardic Diaspora in the Caribbean."  The conference gathered scholars from the United States, Germany, Netherlands, Suriname, France, and Israel and included presentations in English, Spanish, and French.  Topics ranged from Intermarriage and Adultery, to Itinerant Scholars, to Language and Literature, to the Poor and Migration, to the Material and Visual Legacies. A portion of one of these presentations is available online via open access as "Adultery Here and There: Crossing Sexual Boundaries in the Dutch Jewish Atlantic" by Roitman and Ben-Ur in the fantastic collection Dutch Atlantic Connections, 1680-1800Linking Empires, Bridging Borders (Brill). Like many of the conference papers, Roitman and Ben-Ur's work speaks to the fluidity of communal boundaries.

Roitman was not the only scholar to reference Suriname.  Indeed, Suriname and Iberia served as the conferences' book-ends.  The opening keynote by Aviva Ben-Ur (U. Mass. Amherst) focused on religious autonomy in Jodensavanne, alias "Jerusalem on the Riverside."  In contrast, the closing lecture by Yosef Kaplan (Hebrew University, Jerusalem) brought us back to the Iberian legacy of Caribbean Sephardim by featuring a biography woven from the inquisition records regarding Cristobal Mendez, a seventeenth-century converso. As Kaplan noted, Mendez moved back and forth across the geographic and religious boundaries that divided Jews from Catholics.  The question of boundaries and who controls them was an issue invoked by many of the talks.  Moreover, Suriname and Jodensavanne became a key place in which this conversation was staged, and it is worth asking why.

Jodensavanne was not only one of the earliest Jewish settlements in the Americas, but also the only semi-autonomous Jewish town in which Jews were allowed to design the town's layout and features.  By the "end of the 17th century, approximately 575 Jews lived in the flourishing agricultural settlement of Jodensavanne owning more than 40 plantations and roughly 1,300 slaves" (http://www.jodensavanne.sr.org). Although the town burnt down in the nineteenth century during a Maroon rebellion, the ruins excavated since the 1970s include not only the synagogue but also the aforementioned Jewish and African cemeteries.  In addition, the ruins of the mikveh (ritual bath) were  discovered in October 2014. Images of the mikveh's remnants are available on the Jodensavanne Foundation's facebook page.

Today it is the combination of Jewish and African traditions that makes Jodensavanne in particular and Suriname in general such a rich place to study.  Jodensavanne highlights how slavery in the Americas impacted Jewish religious practice and forced communities to innovate. Suriname, for example, was home to Darhe Jesarim ("Way of the Righteous"), the first Afro-Jewish Community in the Americas. As Barry Stiefel noted in his presentation, the rise of the "Siva" or brotherhood and the establishment in the 1779 of a "godshuis" (church/synagogue) in Paramaribo, corresponded with the rise of African American churches in North America and the Caribbean.  Although the Darhe Jesarim did not remain separate from the other Jewish congregations for long, Suriname continued to be a place where Jews of color and people of mixed descent could find a home.  My presentation on Proclaiming Race: Clothing and Manhood in the Sephardic Caribbean, for example, featured the portrait of Isaac Lopez Brandon, a Barbadian of mixed Sephardic and African descent who was born a slave and who after being manumitted, came to Suriname in 1812 to convert officially to Judaism.  You can read more about Isaac Lopez Brandon in my recent article in Heritage magazine.

Given this unusual and rich legacy, it is not surprising that the town of Jodensavanne is in the process of applying for UNESCO World Heritage inscription, as is Hamburg's Jüdischer Friedhof Altona Cemetery.  To find out more about the Jodensavanne Foundation visit them online or follow them on facebook.