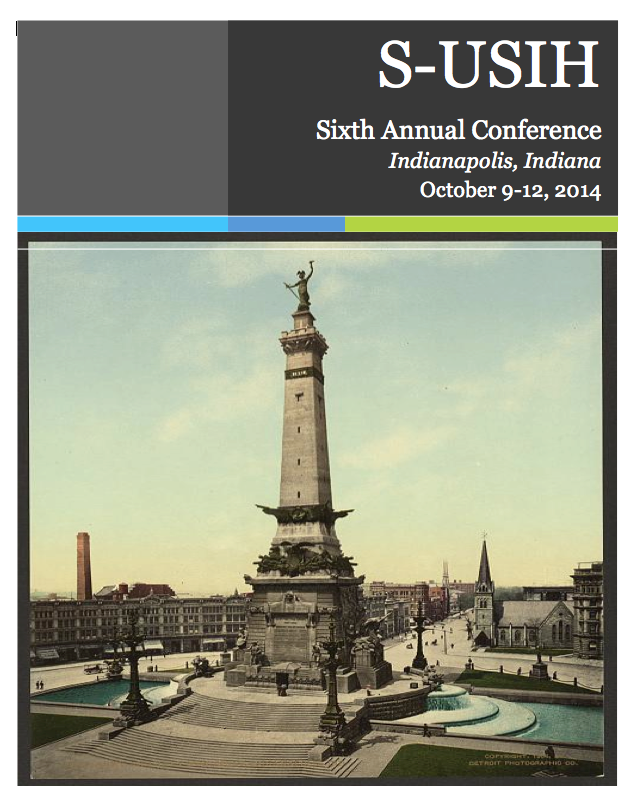 The following is a guest post by Dan Hummel on a roundtable that took place a few weeks ago at the Sixth Annual U. S. Intellectual History Conference.  Dan Hummel is a Ph.D. Candidate at the University of Wisconsin-Madison who studies American religious and diplomatic history.  His dissertation examines Jewish-Evangelical relations in the mid-twentieth century, with special emphasis on the state of Israel as both a theological idea and a historical actor.  Be on the lookout for his essay to appear in Religion and American Culture in 2015!

At the recent annual conference for U.S. intellectual history (October 9-12) in Indianapolis, religious themes made a major showing. There were a number of panel papers on religion and religious thought, and Kathryn Lofton (Yale University) delivered the keynote address on Bob Dylan. Historians of American religion seem to have found another home in the field of US intellectual history. In one of the most methodologically explicit discussions of the new interest in religion, an impressive group of scholars met on Saturday morning to reflect on the place of theology in intellectual history. Titled “The Theological Turn in Intellectual History,” the roundtable featured Andrew Finstuen (Boise State University), Matthew Hedstrom (University of Virginia), Andrew Jewett (Harvard University, presenting the written comments of K. Healon Gaston, who was absent), and Molly Worthen (University of North Carolina-Chapel Hill).  The panel was chaired by Lilian Calles Barger, who recently completed her doctorate on liberation theology at the University of Texas-Dallas.

The discussion was wide-ranging, especially in the long question and answer time. Audience members considered George Marsden’s longstanding position on academic pluralism and the confessing historian’s theological commitments; the Protestant-centric tendencies of a term such as “theology” to describe religious thought; the extent to which historians can responsibly identify theological underpinnings or themes in avowedly secular or non-religious writers; and ways to access the role of theology in lived experience. For the sake of space and time, I will limit my summary to the panel presentations, which overall provided much food for thought. There were at least three overarching insights worth conveying to readers of RiAH.


First, the panelists agreed a theological turn in US intellectual history had indeed occurred, especially in studies of the twentieth century where scholars, intellectuals. and theologians themselves witnessed a secularization of thought. Gaston, in grappling with how we could identify the new interest in theology, pointed to the wave of new scholarship (panelists' own monographs providing some good examples) in the last five years. Furthermore, theologians such as Reinhold Niebuhr and Paul Tillich have received new attention by historians, journalists, public intellectuals, and even U.S. presidents. Barger, taking a wide view, observed a theological turn throughout the humanities as the line between sacred and secular was also blurring, in her estimation, outside of the academy. While none of the panelists argued for the primacy of theology in U.S. intellectual history, they were uniform in their call that intellectual historians recognize the importance of theology as an integral dimension to the field.

Second, panelists beginning with Barger’s opening remarks emphasized the opportunities for finding the influence of theology in intellectual history beyond the usual suspects of theologians, philosophers, and overtly religious figures. Hedstrom framed his comments around the observation that conservative Protestants and Catholics, who are often explicitly systematic and propositional in their theology, have received much scholarly attention in recent years and provide an easier subject for study. More difficult are those historical actors who have understood theology in affective or even anti-intellectual modes, such as Harry Emerson Fosdick, who sought God in the beautiful, less so in doctrines and confessions. Though more elusive for the historian, tracing the genealogies of these ideas about theology (which may often be couched in anti-theological language) is an important next step for historians of theology and religious thought. Other panelists echoed Hedstrom’s call for work that examines the assumed, unexpressed, and sometimes contradictory ways theology has animated a wider array of religious actors.

Third, panelists issued a call to become more literate in the field of theology and the language theologians employ. Finstuen suggested that intellectual historians familiarize themselves with the “theological canon,” much as U.S. intellectual historians are familiar with their own canon of thinkers. How many intellectual historians, Finstuen asked, are familiar with the writings of Paul Tillich and Karl Barth, or important contemporary theologians such as John Milbank and N.T. Wright? Worthen, also identifying a field-wide ignorance of the classics in theology, called for historians to realize theology can be expressed in both formal and idiomatic language. We may find more broad ranging influence of theological language and concepts created by professional theologians among the laity if we better understand the theologians and their works.

It may do well to end on Worthen’s claim that including theology in intellectual history will more explicitly and reflectively help historians examine some unarticulated biases against theology that have hindered past approaches in the field. If we treat theological motivations as foundational, on par with social, economic, and political commitments, we may be forced to reexamine the role theology has played in the lives of Americans in the twentieth century. In both their propositional, formal manifestations, as well as in sentimental and affective modes, theological ideas help improve the field of U.S. intellectual history as a whole by highlighting the Humean and Burkean – not simply Cartesian – understandings of human thought and motivation.

Lilian Calles Barger said…
Thank you Dan, this is an excellent recap of our session. Indeed Religion and Intellectual historians have much to share as they illuminated what has been regarded as the "black box" of theology. Exciting scholarship awaits as we expand the boundaries of both social and religious thought. Thank you.
October 23, 2014 at 10:15 AM

Trevor Burrows said…
Thanks for this great recap, Dan. There was a lot to take in at this discussion and I think you captured the panel's key points very well.

The panel did a great job of highlighting some of the benefits of a "theological turn," but I would have liked to hear a bit more on the potential boundaries or peculiar dangers that come with taking on theology in our research. It seems to me that, beyond the rare theologian who made it to the illustrious cover of Time magazine, much of what we might recognize as theology was written for a rather small and specific audience. I wonder what steps we might take to avoid overstating the presence or impact of certain varieties of theology in our subjects as we attempt to give it the treatment it deserves.

Matthew Hedstrom's comments are also suggestive of limits to be negotiated here, as they remind us that "theology" is a rather ambiguous term. We might do well to ask - with a nod to some recent discussions here at RiAH - what work does the term "theology" do, both for ourselves and our subjects? Why, in any given context, is one body of ideas being categorized as theological, and another not? These may be especially important questions if we are trying to integrate theologians and their ideas into larger discussions of any given period.

Lilian Calles Barger said…
Trevor, As I stated in my opening remarks. I defined theology in two ways. First, that which is articulated by academic theologians and second, wider diffused religious ideas expressed by ordinary people in the course of their lives that motivates them to certain private and public action. People create theologies, ideas about God, everyday.

I think we are a long way from paying too much attention on minor theologians. Carl Henry, for example, wrote extensively about culture and politics that has not been examined by historians. But so did Harvey Cox and William Stringfellow, a very theological social thinker.
October 24, 2014 at 8:22 AM

Dan Hummel said…
Trevor, thanks for the kind remarks. I agree we need a discussion of boundaries/when it becomes excessive, but I don't think we're there yet. In other words, I agree it's an issue, but I also agree with Finstuen and others on the panel that most intellectual historians don't yet have enough training/reading in theology to know what we're missing.
October 24, 2014 at 2:03 PM

L.D. Burnett said…
An intellectual historian does not need training in theology, any more than one needs training in psychology, in order to examine texts from those fields/disciplines either in conversation with each other, or in conversation with a broader set of texts from a particular time period. One benefits from the familiarity that comes from broad reading, as is suggested above, in order to know simply what (kinds of) texts might be available to answer a particular question. However, it is also sometimes the case that a newcomer to a field can see something salient that others are missing.

I think Lilian's description of "the theological" as encompassing both formal, systematic explorations of ideas about the transcendent or the eternal or the divine, and informal, not-necessarily-systematic expressions of thought about the same kinds of ideas/issues, is an excellent way of framing the issue, and is particularly useful for intellectual historians who are interested in foregrounding the history of thought.

Indeed, a great example of an historian who took the theological turn in that broader sense is Drew Gilpin Faust. In This Republic of Suffering, she does a great job of explaining how the experience of the Civil War transformed Americans' ideas about death and the afterlife. Those are theological ideas, even if they were not systematically articulated by everyday Americans. Such ideas are everywhere, and any intellectual historian would do well to be attentive to them.

It is correct that some historians are probably more habituated to hearing or recognizing "the theological" than others, due to previous training or experience. So those of us who have ears to hear can transcribe those strains in our own work and help our colleagues be more attuned to the theological in both its formal and informal instantiations. Once a text has been situated in its intellectual context by any one of us, it is then rendered accessible -- or perhaps even rendered visible -- to all the rest of us.

Dan Hummel said…
Of course training is not necessary, but some of the most insightful historians in my field, American evangelicalism, have indeed received formal seminary or divinity school training. Mark Noll, Betty DeBerg, and John Turner immediately come to mind as such scholars who have written about theological influences in ways beneficial to intellectual historians.
October 24, 2014 at 7:40 PM

Third, panelists issued a call to become more literate in the field of theology and the language theologians employ. Finstuen suggested that intellectual historians familiarize themselves with the “theological canon,” much as U.S. intellectual historians are familiar with their own canon of thinkers. How many intellectual historians, Finstuen asked, are familiar with the writings of Paul Tillich and Karl Barth, or important contemporary theologians such as John Milbank and N.T. Wright? Worthen, also identifying a field-wide ignorance of the classics in theology, called for historians to realize theology can be expressed in both formal and idiomatic language. We may find more broad ranging influence of theological language and concepts created by professional theologians among the laity if we better understand the theologians and their works.