For early Americans and Europeans alike, cosmetics carried spiritual and moral messages.  Seventeenth- and eighteenth-century beauty guides lauded the smooth complexions, vermilion lips, and white teeth cosmetics could provide; yet, ministers decried makeup's spiritual deception.  When the "compassionate conformist" John Dunton published Englands Vanity in 1683, patches, painting, and periwigs invoked his ire.  Dunton's derision was not solely aimed at Restoration dandies, though.  Jews also received his scorn for (1) supplying "hellish" luxuries like silks and velvet, (2) for aping Roman fashion in the era of Vespasian and thus bringing about the destruction of the Second Temple, and (3) for providing the example of Queen Jezebel, who had led Ahab in the Northern kingdom of Israel astray by painting her face (Dunton 86-90, 127, 139). For Dunton, Jezebel's face painting included her use of "black patches"--a practice that mirrored the silk patches popular among the French-influenced Restoration court, aristocrats, and upwardly mobile women of the 1680s (Dunton 86-87).  Even playwrights like John Webster at times engaged in anti-cosmetic moralizing by contrasting morally-suspect women who used makeup's art to deceive suitors with the unpainted faces of virtuous women who were naturally "decked with innocence." For Webster and other anti-cosmetic moralizers, health and labor--not paint--should bring vitality and beauty to a woman's cheeks (Karim-Cooper 89). Makeup reflected not only one's status and economic position, but also one's spiritual and moral inclinations.

By the early nineteenth century, "the obvious, highly artificial makeup of the eighteenth century" had given way to a "subtle, natural, deceptive makeup" (Corson 291).  Makeup remained popular in both the Northern and Southern United States during the Jacksonian era, but when nineteenth-century Americans provided guidance on cosmetics, women at the country's spiritual margins once again served as a warning against makeup's misuse.  Older ladies who still used the white enamel and heavy rouge that had been popular in the eighteenth century were now satirized as pathetic, deceptive, and ill-tempered, the latter perhaps due to the poisons widely used in the earlier makeup (Corson 292; figure at right).  The young and fashionable eschewed patches, but continued to use more natural remedies. The Vermont Gazette warned in 1831 that "I've never seen a lady past her climax, retain her beauty unless...she was a stranger to cosmetics," (XLVIII. 2493, p. 2), but far more common in Jacksonian newspapers were the ubiquitous advertisements for Perfumery and Cosmetics, often emphasizing natural ingredients. Women were encouraged to use cold creams and cream of almonds for the "removal of freckles, pimples, etc." but in ways that underscored rather than covered their natural beauty (Cayuga Patriot, October 12, 1831). Virtuous use of makeup meant using it to enhance, not cover, one's natural features.


In addition to older women, non-Christians were ridiculed for their unsubtle and seemingly hopeless attempts at achieving beauty.  When the 1833 American tome Toilette of Health, Beauty, and Fashion (Boston: Allen and Ticknor) gave advice on and cross-cultural insights into beauty and deportment, Jews received a special disparaging note. Sephardic Jews in particular were the target of the anonymous author's criticism: Dutch Jewish (i.e. Western Sephardic) men were criticized for speaking too animatedly, and Turkish Jewish women (i.e. Eastern Sephardim) were criticized for applying too much cosmetics:  "Few of the women [in Turkey] paint except among the Jews," the author notes, "and such as are of the lowest and most debased order; but they generally black their eye brows, or rather make artificial ones, with a certain composition which they call Hattat" (Toilette 49, 181). To be Jewish, apparently, was to lack subtlety and finesse.

Yet despite all these warnings, portraits reveal that early American Jewish women did paint their faces.  Makeup was an important part of self-fashioning for early American Jewish women.  Like clothing, cosmetics represented a crucial way women could create their own images.  While gentile male artists like Gilbert Stuart, Gerardus Duyckinck, and Thomas Sully were hired by Jewish patriarchs to paint Jewish wives and daughters, cosmetics represented a daily opportunity for Jewish women to paint their own faces as they themselves desired.   While Dunton, Allen and Ticknow warned of Jewish immortality and vulgarity, Jewish women used makeup to present themselves as subtle and modest.

In this post I look to three examples of the use of cosmetics for self portraiture by one of the most famous and admired nineteenth-century Jewish women, Rebecca Gratz (above left).  I then briefly address how cosmetics continue to be an issue of Jewish law and practice for orthodox women today.

In 1830-31, American painter Thomas Sully painted three portraits of Rebecca Gratz (1781-1869).  Known as a great beauty, Rebecca Gratz was also "a prominent Philadelphia philanthropist; among the many organizations she helped found were the Female Association for the Relief of Women and Children in Reduced Circumstances, the Philadelphia Orphan Asylum, the Hebrew Sunday School, and the Female Hebrew Benevolent Society" (Rosenbach Museum and Library, Rebecca Gratz).  In an era in which Reform Judaism grew in prominence, Gratz remained traditional in her approach to Jewish observance, even as she expanded the possible roles Jewish women could play in communal life through her creation of women's philanthropies.
There are many things to admire about Thomas Sully’s portraits of Rebecca Gratz.  One of things most commonly noted about his 1830 portrait owned by the Delaware Art Museum (above) is Gratz's bizarre headdress, which is often read as making the portrait distinctively “Jewish,” albeit in ways that aren’t entirely obvious today. (According to Elizabeth Clark Lamb, the “exotic…ivory turban” is intended to mark Gratz as an “Old Testament heroine”; Brilliant 58). In this post, however, I’d like to call attention to what I believe is a previously unremarked upon aspect of all three portraits from 1830-1831: Gratz’s use of make-up to present herself as youthful, virtuous, and fresh. Unlike earlier generations of European and Turkish women who had used makeup or henna to look clearly painted, Gratz uses makeup to appear as if she were naturally "decked with innocence."

Although the 1830-31 portraits present her in youthful dress and poses, Gratz was fifty when Sully painted her portrait (above).   That is, Gratz had come of age in an era in which "bright red lips and magenta cheeks on a chalk-white face were fashionable." Makeup in this earlier era was deliberately unnatural, since the shade of red used "depended on the quality of rouge the lady was able to obtain."  Artificiality implied disposable income (Corson 245). Yet even in an earlier portrait by Edward Malbone, Gratz does not appear to favor the white face enamel of the late eighteenth century:  rather, Gratz's early use of cosmetics is subtle and in-keeping with neo-classical values (right). While Gratz may have used powder in her later portraits by Sully, she does so with the subtle gestures lauded by Toilette of Health, Beauty, and Fashion (1833).  Unlike enameled skin, Gratz's skin in the Sully portraits has a healthy glow.  Indeed, Gratz uses makeup to style herself as in the bloom of youth. Her use of cosmetics also differs from the "artificial" use of henna paint by Turkish Jewish women commented on in the Toilette of Health, Beauty, and Fashion.  Thus while the style of Gratz's dress differs dramatically in all three portraits, what remains constant is her makeup: lightly rouged cheeks, a red bow-like mouth and possibly the subtle blackening of eye-brows that was popular in the era (Corson 302).  Gratz uses makeup to achieve a look that suggested she was "decked with innocence," to use Webster's phrase. While her rouge may not seem quite as subtle to our eyes as nineteenth-century advice manuals recommend, it was in was in keeping with the era's paragon of innocent virtue, young Queen Victoria, also painted by Thomas Sully in 1838 (below).
Gratz's youthful bloom in the 1830-31 portraits underscores the virtue of single blessedness rather than the "curse" of spinsterhood.  Like many Jewish American women of her generation, Gratz never married (see my previous post on Single Blessedness).  Yet unlike caricatures of spinsters uselessly mixing concoctions that can't and won't ward off time (below), Gratz used makeup to present herself as eternally virginal, pure, and innocent.  Gratz was an observant Jewish woman who both changed the role of Jewish women within organized religion and upheld Jewish traditions; her use of makeup suggests even traditional nineteenth-century Jewish American women felt the freedom to paint themselves in accordance with the norms of their day and in variance with anti-Semitic caricatures.


Gratz's use of cosmetics to present herself as eternally youthful resonates both with nineteenth-century cosmetics claims (top and left) and with makeup campaigns today.  As Elizabeth Berger has noted, even when makeup is aimed at secular American consumers, the rhetoric of salvation, millenarianism, and immortality permeates contemporary advertising campaigns (Berger 29).  Notions of beauty as well as the spiritual values associated with different cosmetic styles have certainly changed over time, but for twenty-first century Jewish American women, makeup continues to play a role in their spiritual self-stylings. Within the varieties of contemporary American orthodoxy, for example, Jewish law and tradition impact how cosmetics are used.  At one extreme, books like Modesty: An Adornment for Life by Rabbi Pesach Eliyahi Falk provide strict guidelines for which cosmetics are permissible to tznius (modest) Jewish women (Falk 430-47).  Yet even for those not striving to be tznius to the degree proposed by Falk, Jewish law impacts how Orthodox women use makeup.  For instance, permanent cosmetics (right below) have been the subject of recent halakhic disputes, because such procedures resemble tattooing, a practice forbidden by Jewish law (Bleich 83).

Jewish law also impacts the use of non-permanent makeup. Cosmetic choices and practice are impacted by halakhic (legal) restrictions regarding painting on the Sabbath and Yom Tov (holy days) and the need for married women to trim and completely clean nails (and hence remove acrylics and enamels) before immersing in the mikveh.  Makeup can also be subjected to the laws of kosher supervision, even though most women don't deliberately eat makeup. Just as cosmetics in Gratz's day often used red coloring derived from non-kosher insects, so too, today the kashrut (kosher status) of cosmetics remains a concern, particularly during the holiday of passover, when various cosmetics often float on and off of yearly "kosher for passover" lists authorized by leading rabbis and kosher organizations. 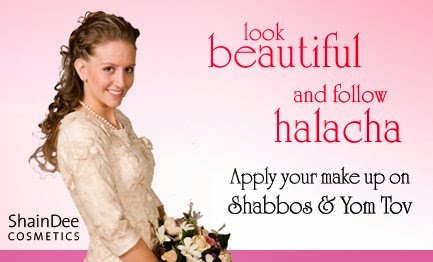 One of the more interesting and innovative responses to these regulations has been the creation of a line of makeup by ShainDee Cosmetics (left), that can be used on the Sabbath and Yom Tov. Developed by an orthodox woman for other orthodox women, the line includes products that are kosher for passover.  Concerned consumers can even watch a video by major rabbinical authorities that provide guidelines for using cosmetics on the Sabbath.  Cosmetics remain an important avenue of self-expression and self-fashioning within a subset of American Judaism that tends to place a high value on femininity and gender difference.