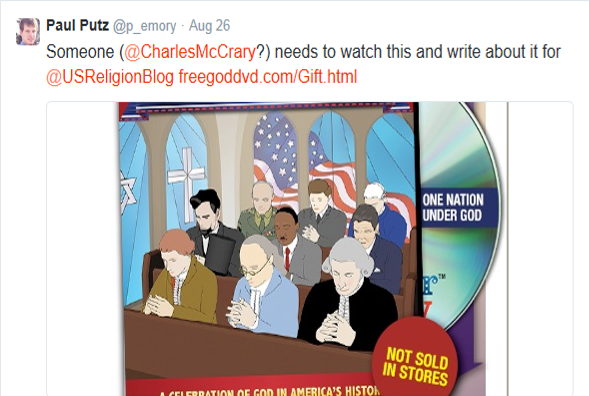 A couple months ago I sent out the tweet you see on the left. A few #twitterstorians jumped into the conversation, and one of them mentioned that John Wilsey might be willing to write a guest post on the subject since he was working on a book about American exceptionalism. The end result of that twitter conversation is this post. Wilsey is assistant professor of history and Christian apologetics at Southwestern Baptist Theological Seminary. He is author of One Nation Under God: An Evangelical Critique of Christian America (Pickwick, 2011) and a forthcoming history of American exceptionalism as an aspect of civil religion (IVP Academic, 2016).

American exceptionalism, in the words of UVA political scientist James W. Ceaser, has “gone viral” in the past decade or so.(1) Whereas other generations may have used the term “American patriotism,” over the last twenty or so years, more and more Americans have used the term “exceptionalism” to cast America in special terms, set apart and superior to all other nations, past and present. Exceptionalism as a concept animated the presidential campaigns of Mitt Romney and Newt Gingrich, both of whom wrote books casting themselves as noble champions of the idea.

Combine the idea of American exceptionalism with the Christian America thesis—the idea that America was founded as a Christian nation—and you have a potent brew indeed, a super-charged nationalism which has an exceptional quality all its own.

I have a word for this powerful ideological combination—Americolatry. Americolatry consists of a form of civil religion that entails the doctrine of American greatness, innocence, and superiority (e.g., Reagan’s “the last, best hope of mankind,” Albright’s “indispensable nation,” or David Gelernter’s America as “one of the most beautiful religious concepts mankind has ever known”(2)). Americolatry also entails the practice of religious devotion to America by inextricably linking Christian devotion to patriotism. In other words, to be a devoted Christian equals the uncritical acceptance of America as superior and morally regenerate.

We encounter one of the bastions of Americolatry (American exceptionalism + Christian America thesis) in many Christian school and Christian homeschool history curricula. Now before I go any further, I must come out and say: my wife and I are evangelical Christians and we homeschool our two children. As Christian homeschoolers, we want our children to learn how to think Christianly about the world they inhabit. We also want them to think historically about the past. And we realize that there is no necessary conflict between thinking Christianly and thinking historically. Quite the contrary—thinking Christianly and thinking historically are entailed in one another, since Christianity is a faith built on a historical foundation.

Here is an example of a history curriculum you can purchase for your kids: http://www.freegoddvd.com/Gift.html. You can view the video sample before you commit (which I highly recommend you do before committing your hard earned money). You’ll notice that it has a ringing endorsement from former Arkansas governor and failed presidential candidate Mike Huckabee. But far from being an outlier, this example is one of several Americolatrous history curricula being offered to Christian homeschooling families.

Three other examples of Americolatrous history curricula are A Beka Books, Bob Jones University Press, and Veritas Press. The eleventh grade U.S. history text produced by A Beka sets out to take “a positive patriotic approach . . . bringing to life events and personalities that have shaped the nation with a special emphasis on our Christian heritage.”(3) At the outset of the book, the authors make their ideological approach to history plain—this is a book extolling America as a morally regenerate nation that is possessed of no social ills and can do no wrong as it acts in history. The rest of the book follows from this stated premise.

The authors of the BJU U.S. history text actually compare America with heaven in their closing pages. The authors look ahead to the Second Coming of Christ, and the world to which all believers in Christ will go at the end of the age. “As America was to weary pilgrims long ago, this New World [that is, heaven] will be a refuge, a welcome shore, a city upon a hill.”(4) America, it seems, serves as something of a type for the authors of the BJU text.

The Veritas series of Omnibus books are not, strictly speaking, history texts. They are a collection of interdisciplinary readings from literature, philosophy, theology, history, and Scripture. But the readings on historical topics often forward an Americolatrous agenda, much like the A Beka and BJU texts. Specifically, Douglas Wilson compares the American and French Revolutions, calling the American Revolution “righteous” and the French Revolution “unrighteous.” O. Woelke Leithart suggests that the American Constitution ought to be read and interpreted much like Scripture—as a transcendent and permanent authority, and one directly informed by biblical principles. And while other countries have attempted constitutional government, George Grant wrote that only the U.S. Constitution has endured for so long and been so successful. In fact, according to Grant, “there is little doubt that [failure] awaits the emerging democracies that have begun dotting the maps of Europe, Asia, and Africa following the collapse of communism.” For Grant, the U.S. Constitution is “a creed. It is the very quintessence of American exceptionalism.”(5) Forget that the Constitution failed when the Union collapsed in 1860-1861. Forget that the Constitution had to be remade in the civil rights amendments of 1865-1870. And forget that the fabric of the American nation was woven in the threads of slavery, and slavery’s legacy has yet to be expunged from the national life.

Necessary ontological superiority; moral innocence; celestial typology—these are the Americolatrous themes appearing in much Christian school and homeschool curricula today. It is not necessary for us to jettison the concept of American exceptionalism altogether. That would be throwing out the baby with the bathwater. Edifying patriotic devotion that calls the nation to its founding principles of equality, individual rights, tolerance, and justice emanates from a conviction that America is an exceptional nation.

But casting America as an object of worship, characterizing patriotic zeal as an expression of spirituality, and equating the Christian faith with a gospel of Americanism accomplishes nothing but the destruction of the idea of America that contributes to human flourishing, and the perverting of a gospel that provides Light to the world. We Christians who want our children to both think Christianly and think historically can and should expect better.

Mark T. Edwards said…
Thanks for these reflections, John; they took me back to my Beka-boyhood. It was also a pleasure meeting you at USIH and becoming more familiar with your work.

As you well know, evangelical historians have been trying to take down the Christian America thesis for decades (My first undergraduate research paper was a critique of David Barton videos using the Noll/Marsden/Hatch volume from the 1980s). In fact, many historians of religion have given up on this task, believing it just feeds the fears that the "liberals" are trying to rewrite "our" godly heritage. What would you say is the value or importance in continuing to challenge Americolatry?
October 20, 2014 at 7:33 PM

Unknown said…
Hey Mark, great seeing you at USIH, too! And thanks for your question.

Internally, this religious exceptionalism (which I call "closed exceptionalism" in the forthcoming book) divides people into groups of the Chosen and the Other. These groups created by Americolatry have a racial, ethnic, and religious dimension to them. We see the Other being excluded from civic engagement throughout U.S. history, but the trend since the Civil War has generally been in the direction of eliminating such distinctions.

In international relations, closed exceptionalism (Americolatry) leads to arrogance ("America expects . . . "), which ultimately, as we've recently seen, can lead to the notion that America's power is irresistible, that our policies are always right, and that there is no goal we cannot achieve.

Americolatry is birthed from bad historical thinking. It takes root in a gullible religious mindset. And it is a sham patriotism because it is a violation of the very principles that it purports to champion, that is, those principles expressed in the founding documents.

I could go on and on, as you can see.

The Americolatry term is inventive and covers the topics your project delves into, but I wonder about the ultimate purchase of the term. It is provocative, and would likely work as a short title for the book (as opposed to using the two-word descriptor "American exceptionalism”). In any case, I'd be interested to hear other thoughts on Americolatry.

My primary question is in the interest of a regional and/or geographical analysis. I'm wondering about the location of the publishers of homeschooling history materials and curriculum. A Beka and BJU are in the South, and I believe Veritas is in Pennsylvania. I wonder about the extent to which geographical location matters here in terms of how these texts engage American exceptionalism/Americolatry? Perhaps Brantley has some thoughts on this?

Looking forward to reading the book in print.

Unknown said…
Thank you, Phil, for your question--you are right about the location of these publishers. What's more, Veritas is closely linked with Logos School in Moscow, Idaho, a classical Christian school that was founded by Douglas Wilson. Wilson is also the editor of the Omnibus series of texts. And Veritas Press is connected with Veritas School, a large classical, Christian school in Lancaster, PA. Veritas School is a brick-and-mortar school and Veritas Press Scholars' Academy is an online school.

I'd like to explore that question further, about any possible connections between geographical location and strength of Americolatrous convictions. Great question!

AKMA said…
I used the term "Sacramerica" to refer to this phenomenon, with special reference to the unselfconscious characterisation of the flag, or some other metonym for the USA, as "sacred."
December 15, 2014 at 9:35 AM