When Women Don't Marry: Single Blessedness and the Shidduch Crisis 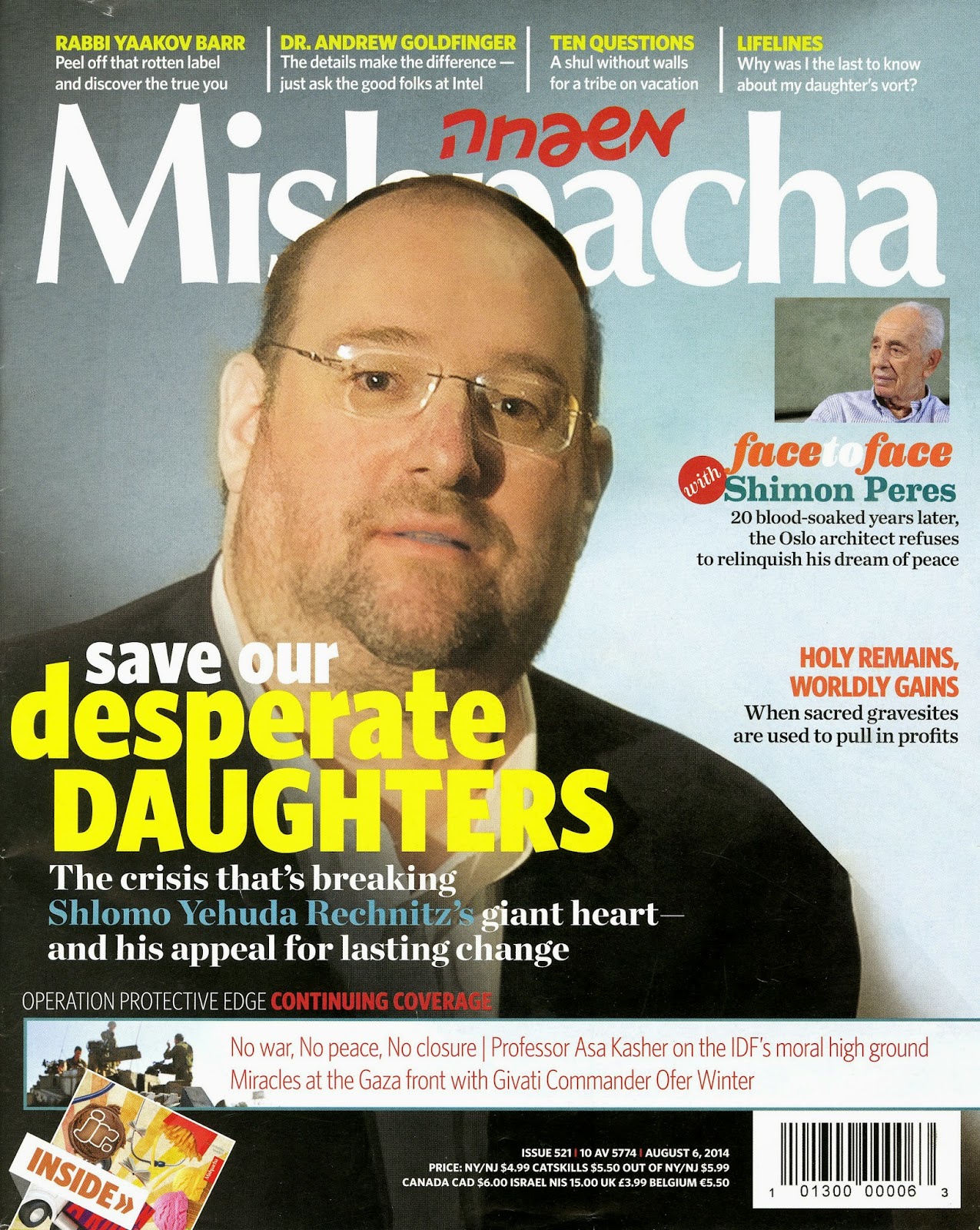 "Save our desperate daughters," proclaims the cover article in issue 521 of Mishpacha [family] magazine, an English-language, ultra-orthodox journal. Although distributed via mail worldwide and featuring articles from from around the world, the magazine is based in New York and Jerusalem and is primarily aimed at a U.S. audience, as well as English-speaking Jewish-American ex-pats living in Israel.  The choice of English (rather than Yiddish) as the common tongue speaks both to the magazine's desire to appeal to Sephardic Jews and to the increasing number of people who taken on orthodox practice as adults. Magazines like Mishpacha help build community and become a stage upon which American orthodoxy performs its values and concerns.  Two key concerns are marriage and gender roles.

Many ultra-orthodox Jews believe in a limited engagement with the internet; thus, in-group magazines have become a crucial way to track of current events and forge a sense of community that extends beyond U.S. national boundaries and links families living in the U.S., Israel, and Europe.  Although nominally one publication, the magazine comes with three separate components: one aimed primarily at men, one at women, and one at children.  Interestingly, the August 6, 2014 (521) issue of the magazine, in which the article on the crisis for young Jewish women appeared, was placed in the men's portion of the magazine, and was was filtered through the gaze of an important Jewish male philanthropist, Shlomo Yehuda Rechnitz.  What was the crisis "that's breaking Shlomo Yehuda Rechnitz's giant heart" and required attention from readers?  The lack of marriage partners for young orthodox women.

As Mr. Rechnitz notes, "Everywhere I turn, and at most Shabbos [Sabbath] tables, eventually the topic turns to the Shidduch Crisis. What is causing the Shidduch crisis? What can we do to solve the Shidduch Crisis?"  Given the magazine's audience, Rechnitz claims regarding the crisis's ubiquity are almost undoubtedly correct. While the "crisis" (or catastrophe as Mr. Rechnitz renames it) may be news to readers of the RAH blog, few who read Mishpacha magazine would be surprised or doubt the Shidduch Crisis's existence.  Indeed the magazine often features advertisements for ways to get a segulah (remedy, charm) for Shidduchim (matches; see this brief list of popular segulot and prayers and the image at RIGHT).  For the non-orthodox this may seem mystifying.  What is a shidduch anyway, and why is it suddenly causing a crisis for young Jewish American women? Moreover, the historian in me wants to know, is the shidduch crisis actually new? If not, can the past offer any guidance to current situation?

A "shidduch" [Hebrew: שִׁדּוּךְ‎, pl. shidduchim Hebrew: שִׁדּוּכִים‎] is a type of matchmaking in which  (orthodox) Jewish singles are introduced to one another for the purpose of marriage (wikipedia).  While humans enact the match, it is generally believed that such matches are "besheret" [destined to be, divinely ordained].  Although these marriages are "arranged," they are far from forced.  Even though the match is typically proposed by a family member, friend, or an official (paid) match maker [shadchan: שַׁדְּכָן‎], the couples do date (albeit briefly by secular standards) before agreeing to the match.  Indeed it is this need to agree to the marriage that seems to be part of the crisis that concerns Mr. Rechnitz and Mishpacha magazine, although no one, including myself, would suggest that forcing people to marry is a good solution. While at one time it was normal for orthodox girls to be engaged or married by the end of high school, today of the 72 girls graduating from a well-respected girls-only orthodox school in a "major American city," only 13 were engaged or already married by the time of graduation (Rechnitz 60).

Perhaps more startling, the article suggests many of the girls might never marry.  Rechnitz notes that one popular shadchan [matchmaker] estimated that, "a girl in the yeshivah world who is over the age of 25 has less than a 15 percent chance of ever getting married" (Rechnitz 63).  Mr. Rechnitz is so concerned about young orthodox women's lack of prospects, that in the Hebrew calendar year 5775 (2014-15), he is willing to give a bonus of $10,000 to any shadchan who marries off a girl age 25 or older (Rechnitz 64) (For the long story on average rates a shadchan charges, see this online discussion; short story, though, is that it is a lot of extra money.)

Why does this gap between available orthodox Jewish men and women exist? According to Rechnitz, the gap isn't because because of an actual disparity in the numbers of available women and men.  Rather, it has occurred because men have started to wait to marry and both the "22-year-old boy" and the "24-year-old boy" want to find someone want to marry women who are in the 19-year-old (or younger) range.  Why are women this age more desirable?  As Mr. Rechnitz astutely observes, older "boys" have become set in their ways, and "no 19-year-old seminary girl...is going to tell him how to act or behave" (66).  Yet while at least by my reckoning, math would suggest that if some men decide to delay marriage and then marry younger women, the first group of women their age would indeed find a lack of partners, but this gap should be followed by a few years of extremely high rates of marriage for women when they reached the age of 19 and then a relative equality of available partners.  Rechnitz's article suggests otherwise, though.  Apparently women are continuing to be left out of the marriage loop in large numbers (BELOW).

While I remain puzzled by Rechnitz's explanation of the cause of the "crisis" in America today, I was struck by how old a problem the shidduch crisis actually is.  In the era in which I study (the 1790s-1840s), many Jewish American women never married.  In fact in some early American Jewish families, up to or more than half of the "girls" who lived to be adults remained single.  Moreover, many women waited until they were well past twenty five to marry.  Yet rather than festering in distress, many of these "single girls" went on to change the face of American Judaism.  Both of the first two major Jewish American women poets were single: Penina Moïse and Emma Lazarus.  So was America's darling, Rebecca Gratz, who worked tirelessly for Jewish education, helped found the Philadelphia Orphan Asylum (1815), the Female Hebrew Benevolent Society, and Jewish foster homes, and wrote poetry and letters on the side. Thousands of early Americans benefited from these women's creativity and energy.

Moreover, if women like Gratz were pained when their friends married, it wasn't always for the reason Rechnitz and others might suspect.  Gratz wrote in a letter in 1800 that one of the “bitterest moments of pain in my existence” occurred when she found herself estranged from a newly married friend. A male acquaintance encouraged Gratz not to take it personally: close friendships among women “are rarely found to exist after marriage,” he argued. Though Gratz disagreed, she did admit, “too many examples corroborate the idea” (Ashton 46). That is, apparently what pained Gratz was how women abandoned friends when they got married, not that she herself couldn't find a husband that pleased her.

Unhindered by marriage’s bonds, single Jewish women forged ties of friendship in early America that competed with early Jewish American models of kinship. They revealed these bonds not only in private letters but also in wills that left legacies to single female friends and reordered family hierarchies. The dearth of Jewish marriage partners and the increased value of romance meant there were almost as many single Jewish women as married ones in the 1790s-1830s.  Although Rechnitz doesn't address the issue today, in Gratz's era the dearth of Jewish men was due in part to intermarriage.  Between 1776 and 1840, intermarriage rates had increased to 28.7%, double what they had been in the colonial era (Sarna 45).  While certainly some Jewish women intermarried, such marriages were disproportionately made by Jewish men (Ashton 124).

While some Jewish women appear to have felt either pressure to avoid intermarriage, other women understood there were advantages of avoiding marriage altogether. By remaining single, women maintained greater control over their property and earnings. This control did not go unnoticed by coreligionists. While scholars have typically framed early American women’s gender in terms of the national cult of domesticity, women’s movements in Europe and the agitation for Jewish rights across the Atlantic World impacted how single Jewish women were received and the threat they were considered to pose.  During the early nineteenth century, being single took on positive associations in American Christian life and was often categorized by the term "single blessedness." Yet if single Jewish women of the era deployed the language of “single blessedness,” they did so in opposition to tensions within early Jewish American communities. The vision of the New Jewish Woman they proposed—single, pious, and wedded to a community rather than a spouse—has important ramifications for understanding the rise of modern Jewish gender roles.

Yet despite these tensions, the New Jewish Women impacted American Jewish life. Just as American Christianity became "feminized" during the early nineteenth century, so too did American Judaism offer new opportunities to Jewish women. In 1820, the women of New York's (orthodox) Shearith Israel formed their own Female Hebrew Benevolent Society, which cared for poor Jewish women and raised funds for the poor through balls, dinners, and synagogue offerings.  In 1838, women of the same congregation began a Sunday School and offered education to poor Jews (Guide to the Records of Congregation Shearith Israel, AJHS). Whereas a generation earlier Jewish women's role was primarily in the home and taking care of children, by the 1820s Jewish women had started to take on roles that helped care for American Jews more generally and they helped shape public religious life.  For a generation of women who did not marry or have children of their own, this was a monumental change.

Thinking back to the "shidduch" crisis of the 1790s-1840s, I wonder if solutions employed by American Jewish communities in the past might help shape our future and help us reframe the current situation in which orthodox young women find themselves today.  History's lessons might include the following: