THATCamp Returns to the American Academy of Religion 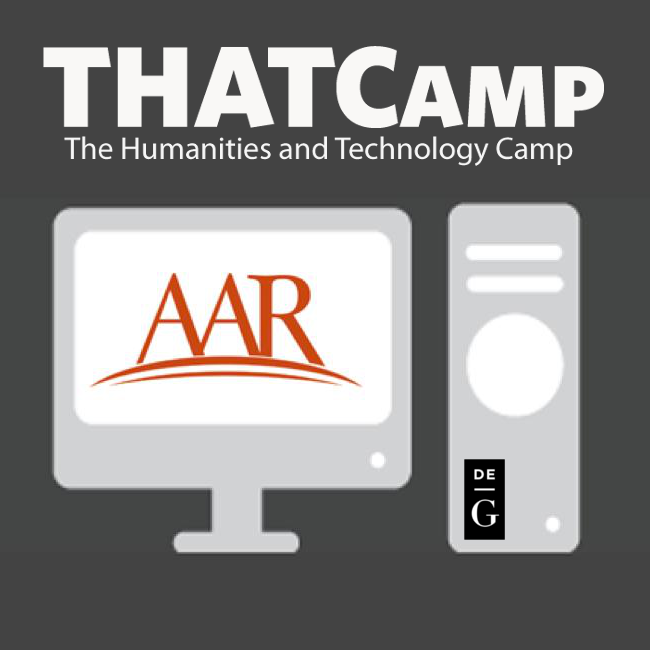 Last year the American Academy of Religion hosted its first ever THATCamp--or, The Humanities and Technology Camp. By all accounts, it was a huge success. Nearly a hundred people came out to the AAR's annual meeting a day early to discuss the various ways the Internet and new media is changing how scholars of religion do their work. There were roundtables on envisioning a digital religious studies, discussions about social media in the classroom, and hands-on workshops where attendees learned how to use new tools and software for teaching and research.

Well, I'm thrilled to announce that the AAR will be hosting THATCamp AAR2014 this November in San Diego!

I've agreed to sign on and head up THATCamp AAR2014. But as anyone who knows how THATCamps work, no one really "runs" a camp. THATCamps are, at their core, "unconferences." As opposed to the traditional conference, were the program is set almost a year in advance and features research that is likely even older, THATCamps are intended to meet the current needs of the attendees. Learning happens less through formal presentations and more in hands-on workshops and participant-led discussion sessions. To find out more about how THATCamps and what you can expect to find there, check out the THATCamp home page run by George Mason University's Roy Rosenzweig Center for History and New Media. To see how THATCamp AAR2013 went, check out the camp's blog from last year.

This year's THATCamp is already shaping up to be great. Just to give you a sneak peak of what's coming, we've already confirmed that we'll have workshops on how to use Voyant (a text mining software) as well as Omeka (a digital exhibit platform). We're also building a session on how the web can help scholars of religion reach new audiences, as well as a potential workshop on podcasting.

If you're interested in attending THATCamp AAR2014, the time to register is now. This year, the AAR has incorporated registering for THATCamp into its regular registration for the annual meeting. So if you want to register now, you can follow the instructions on the AAR's registration page. The THATCampAAR2014 blog will be soon live as well, where you'll also be able to register. And for all the latest news, you can also follow the THATCampAAR on twitter.

But make sure to mark your calendars for Friday, November 21. Because from 9am-5pm in San Diego, THATCamp AAR2014 will be on!
Email Post
Labels: AAR American Academy of Religion chris cantwell's posts conferences digital history digital humanities THATCamp