43 years ago this month,  A.A. Allen died in San Francisco, of acute alcoholism allegedly surrounded by empty pill bottles.  Allen was a tent evangelist who hit his stride in the 1960s and 70s. Previous to that, he was converted in a Methodist church in the 1930s after a hardscrabble childhood, where by his own admissions, Allen was smoking, drinking, and “carousing” with women by the tender age of 12.  Allen became Pentecostal in the 1940s and joined the Assemblies of God, where after a few pastoral appointments, he settled in Corpus Christi, Texas.  Allen became a healing evangelist, and added in copious amounts of exorcisms along with prosperity gospel preaching. His falling out with the Assemblies, like most contestations that become history, depends on who you believe.


Allen tells a story of a “dead” denomination that refused to build him a bigger church and refused to sponsor his evangelistic radio ministry.  Those events put a strain on their relationship, but what caused the Assemblies to sever their relationship with Allen for good was Allen allegedly jumped bail in Tennessee, (Allen’s folks deny it), to escape a drunk driving charge. Allen remained an independent evangelist, settling in Miracle Valley, Arizona, from the mid 1950s to his death in 1970. 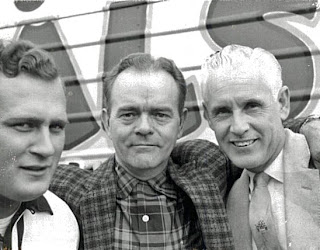 This picture of A.A.Allen apparently with a cross on his forehead says much. According to Allen, he tried to get rid of it and it would not disappear, thereby marking him, like so many Christians past, a recipient of a unique physical marker that signified their holiness and devout faith.  Allen’s healing prowess was so great, that he was said to have prayed over shredded pieces of his old tents and sent them to followers as a healing point of contact--in exchange for a monetary gift.

For decades after his death, and during his ministry, Allen and his followers claimed that terrible things would befall those who came against him. There are claims that the medical examiner, who wrote the autopsy report, committed suicide, and that the suicide was directly related to God’s ability to smite Allen’s enemies. I know, I know, but with these fascinating narratives, there rarely has to be proof.  What Allen’s supporters did and are still doing is maintaining the sacredness of Allen’s narrative--creating an alternative history that his supporters, and supporters of the divine healing movement can use to rescue Allen from his checkered past. There are sworn affidavits online by people who refute everything from their past statements about Allen’s drunk driving in 1955 to statements about his death.  There is something about celebrity preachers who meet ignominious ends that rallies their followers to invest in alternative histories of events that preserves their hero’s(ine’s) status and secure the idea that the faith works--that healing works, as if the faith itself were under attack.
I am reminded of one of my church field trips to Forest Lawn Memorial Park in Glendale, California, where Aimee Semple McPherson is buried, and where Foursquare folks still go to pay their respects. Several years ago, I went to my first and last church field trip, knowing that her contested cause of death would not be mentioned, (since you still cannot find it mentioned on the official denominational website--I check regularly). The graveside memorial trip was just that--hagiographic musings of McPherson’s deep convictions and healing prowess.  Her death was glossed over as “coming after long suffering.” What the denomination, or perhaps few in the church know is that McPherson, after years of physical maladies, and what was probably undiagnosed depression, took an overdose of Seconal.  Whether it was accidental we will never know, but we do know that McPherson’s reputation as the founder of the Foursquare movement, once tarnished by rumors of an affair that led to a faked kidnapping, was not going to be sullied again by her death. Seconal after all, was the same drug that claimed the lives of Judy Garland, Tennessee Williams, and Jimi Hendrix.  It may be fair to speculate that what bothers some about this dark period of McPherson’s life most, is that drug use would have been considered sinful. The Foursquare version of McPherson’s cause of death, kidney failure, is also problematic, since it calls into question a very basic inconsistency many see with healing evangelists, why they are not healed? 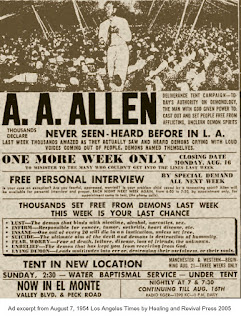 That the McPherson’s and Allen’s of the Pentecostal world have become celebrities, with public personas that require crafting and re-crafting is no surprise.  These narratives are exactly that--spiritual life stories. They are subject to the social, cultural and political influences of the people who are invested in maintaining their alternative narratives and this is what history is at least partially about, history is not spiritual genealogy.  I think the problem I had with that graveside service at Forest Lawn as well as the interviews I’ve conducted with Allen’s followers, is not that there are alternative histories out there, ( I have spent my adult life chasing those histories, and am still paying that student loans attesting to my unhealthy fixation with that noble dream).  The problem I have with many of my brethren is simple--why not?  It is easy to craft your own story, so why wouldn’t celebrity preachers past present and future, want a hand in crafting their best story? It’s as if these celebrity preachers were not subject to the same  pull of pride, ego, and self-absorption.  Elevated to celebrity status by theie own making and the desires of their followers, Allen and Sister Aimee, were never able to live up to their billing--and were much more flawed than their followers will ever be able to concede.