Hot off the Press: Religion, Race, and the Making of Confederate Kentucky, 1830-1880 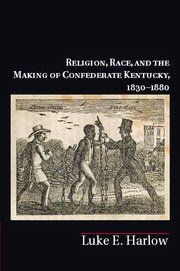 If you're looking for titles to add to your summer reading list, don't forget to include Luke Harlow's book, Religion, Race, and the Making of Confederate Kentucky, 1830-1880, just released by Cambridge University Press.  This one is so hot off the press that I haven't actually gotten my hands on a copy yet, but I read parts of it in manuscript and have no doubt that it will make a big splash in a number of fields, including religious history, the history of the Civil War and Reconstruction, and southern history broadly construed.  Then again, there's no need to take my word for it.  Check out these impressive endorsements (just below the fold):

"Luke Harlow's carefully researched and gracefully argued book reveals the importance of religion - an often-overlooked subject - in the racial politics of the Civil War era. Religion, as Harlow shows, explains Kentucky's transformation from a state that favored the Union to one identified with the Confederacy and white supremacy after the Civil War. Harlow's analysis, however, is about more than Kentucky. In his skilled hands, the state exposes broad national dynamics that explain the limits of change during Reconstruction more generally."
Laura F. Edwards, Duke University

"Luke Harlow has written an important and ultimately sobering book on the relationship between religion, slavery, and race in a vitally important border state. By focusing on a number of key leaders, he exposes both the nature and limits of antislavery sentiment in the church and how the conservatism and timidity of religious leaders led Kentucky along a path toward proslavery Unionism and ironically greater identity with the Confederacy after the Civil War. A first-rate monograph with considerable interpretative bite."
George C. Rable, Charles Summersell Chair in Southern History, University of Alabama, and author of God's Almost Chosen Peoples: A Religious History of the American Civil War

"Luke Harlow's powerful book shows how the political theologies of slavery and white supremacy drove the Unionist state of Kentucky to 'become' Confederate after the Civil War. He ingeniously lays bare the long and contentious transition from the view of slavery as a 'necessary evil' to a full-throated embrace of white supremacy among white Kentucky Protestants, carefully demonstrating exactly how the faith that sustained slavery long outlived emancipation."
Beth Barton Schweiger, University of Arkansas

"Highly original and deeply researched, Religion, Race, and the Making of Confederate Kentucky, 1830-1880 reveals how this border state was neither a moderate middle ground nor an outlier in the nineteenth century, but rather was a key front in the nation's long-standing battle over slavery. Harlow painstakingly reconstructs a diverse array of arguments that vied for supremacy along the pro- and antislavery spectrum - and reveals the crucial position of evangelical religion at the root of it all. The result is a masterful journey through the tangled history of race and religion in nineteenth-century America."
Amy Murrell Taylor, University of Kentucky

Finally, in case you missed it, John Fea has a great interview with Harlow regarding the book over at The Way of Improvement Leads Home.  This exciting new monograph is sure to get more attention - both here at RiAH and elsewhere - in the weeks and months to come.  Congratulations, Luke!