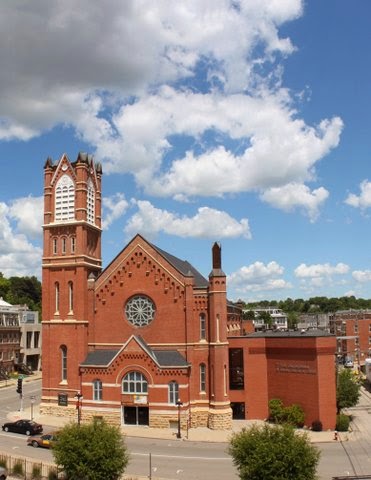 The church I attend in Dubuque will celebrate its 175th anniversary in May. In preparation for the event, church members have offered historical reflections during services and posted monthly articles on the church website. As I have only attended this church for two of those 175 years, I've learned quite a bit myself, both about the effects of historical trends on one institution and about ways public history is constructed and used by the public, as opposed to curated by members of the academic guild.

When First Congregational United Church of Christ (there's a bit of history in the name alone) put out a call for a minister in 1836, this area was known as Dubuque Mines, Michigan Territory. By the time the church was founded, in 1839, Iowa was its own territory but still far out on the western frontier. Home Missions funding from back east supported the church and its pastor for the first decade. After that rough early period, pew rentals covered the church's operating expenses, freeing up offerings for local, national, and international benevolence. When I joined the church, I assumed that its activism in these causes dated to the liberal 1960s or the Social Gospel 1910s, but actually it all started with the pew rentals--one of those facts I "knew" as a church historian but know differently now that I've encountered it in an institutional context.

The Civil War was tough on the church, financially, as money sent to help wounded Union soldiers could not be put toward completion of the church building. The Gilded Age, though, was kind, and the church added a massive pipe organ and several lovely stained glass windows. World War I put different pressures on the heavily German community, forcing churches (though not First Congregational), banks, and other businesses to change their names. My employer changed its name from German Presbyterian Theological School to the University of Dubuque right around the time Iowa governor William L. Harding issued the "Babel Proclamation," which banned the use of German--or any foreign language--anywhere in the state. Again, I knew these things, but I didn't have stories to tell about them before coming here. OK, actually I didn't know there were German Presbyterians at all. I'm still trying to figure that out.

Last example of trends hitting home at First Congregational: The most recent history presentation during the church service recalled the Women's Circles that, until the 1970s, met weekly for fellowship, service projects, and fundraising. Then, of course, women entered the workforce in greater numbers, and the work of the Women's Circles got redistributed to a staggering array of committees. The same week as that presentation, my church history class read selections from Rosemary Radford Ruether and Rosemary Skinner Keller's edited collection In Our Own Voices: Four Centuries of American Women's Religious Writing, and a student asked, "Was the decline of the church in the late 20th century due partly to expanded opportunities for women to associate outside of the church?" My answer would have been "yes" anyway, but thanks to the local history I could add, "and here's how one mainline church has tried to make up the difference."

The way the history of First Congregational UCC has been produced for the congregation, by members of the congregation, doesn't highlight these jump cuts between institutional history and national trends. The story is full of un-famous names and features a few dubious stories (did the church bell really crack because it was rung so vigorously to celebrate the end of the Civil War?). But the local product is by no means bad history, and it reminds me that institutional narratives don't merely serve to illustrate "larger" academic arguments. As Laurie Maffly-Kipp said in her 2013 ASCH presidential address, "Like it or not, there is a staying power to the notion of church history. Recognizing what it has been can only help us better understand our past and, perhaps, better understand ourselves as scholars in the process."
Email Post
Labels: Congregationalism congregations elesha's posts midwest public history

Joshua said…
Bringing up the gap between academic and popular histories is an interesting point.

I've been encountering stories like these myself in researching a local church of mine. Another blogger wrote about the church I research here: http://19thcenturywellington.wordpress.com/2014/04/05/the-congregational-churches/.

A strength of the blogger I posted above is that she seeks to comb out truths from public histories, some of which have issues with how they were written and sourced.

Some things that would interest me, as one who is interested in Congregational churches before the Civil War, include how the church was founded. Did it go through the Plan of Union like so many others did during the time? Was it partially Presbyterian or always Congregational?

Joshua said…
A few things interest me about this church. I am more familiar with the settlement of the Western Reserve, so bear with me here.

1. Do you know if this church was founded through the Plan of Union? Were there Presbyterian influences on the congregation?

2. Your mention of the gap between public and academic histories is interesting. I've noticed this myself and it creates some interesting problems (and opportunities) for historians. Obvious are things like sourcing - but then it also comes to the memory of the church itself.

A blog (not mine) which deals with this well in my hometown is 19th Century Wellington, here is the blogger's post on the church in question I study: