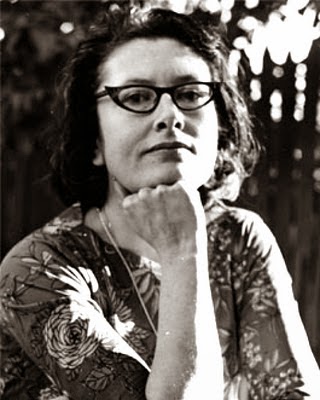 I begin with a disclaimer: I know almost nothing about poetry. I read A Poet's Revolution: The Life of Denise Levertov by Donna Krolik Hollenberg after reading a provocative review in the Women's Review of Books. Kate Daniels' review offers a mostly positive evaluation of  two new biographies of Levertov, but criticizes the poet as a woman and a feminist.* Here is a brief excerpt of the review:

Neither biographer takes a very analytical look at the role of gender in the poet’s life; neither is particularly psychologically minded; and both acquiesce too often to Levertov’s unreliable self-interpretations (taken from her journals) of some of the most troublesome aspects of her life as a woman of achievement in the twentieth century.  Both inadequately address the poet’s myopia about her male-inscribed consciousness, her difficulties with other women, and her homophobia.


Denise Levertoff (her name's original spelling) was born in England in 1923. Her Russian father was descended from the founders of Hasidic Judaism, but he converted to the Church of England and became an Anglican priest. During his prolific career as an author and lecturer, he was a leading spokesperson on Jewish-Christian relations. He met Denise's mother, a young schoolteacher from Wales, in Constantinople, where both were on different religious missions. Denise grew up in an intellectually and politically active household. After World War II, she emigrated to the U.S. with her new husband, a former G.I. and aspiring novelist named Mitch Goodman.

The couple settled in New York City, and joined a cohort of artists, poets, and bohemians. Denise's career as a poet, which began in England, thrived in this new environment. In the 1960s, she and her husband became involved in the anti-war movement. In 1968, Mitch Goodman, along with Benjamin Spock, the Rev. William Sloane Coffin, Marcus Raskin, and Michael Ferber (the "Boston Five") were tried for conspiracy to disrupt the draft after a protest at the Pentagon in October 1967. Denise's activism caused a break with one of her American mentors, Robert Duncan, who believed that poets must prioritize their art, and risked the quality of their poetry with explicit political messages. An excerpt from Levertov's "Life at War" (1966) shows how artistically pressing her political commitments had become:

We are the humans, men who can make;
whose language imagines mercy, lovingkindness;
we have believed one another
the mirrored forms of a God we felt as good--

who do these acts, who convince ourselves
it is necessary; these acts are done
to our own flesh; burned human flesh
is smelling in Viet Nam as I write.

Though Levertov addressed religious subjects in her poems, she was an agnostic during this period. Soon after, however, she became interested in Catholic liberation theology, and while living in the Boston area (she taught at Tufts), she attended both Episcopal and Catholic churches with demonstrated commitments to social justice. In 1990, Levertov converted to Roman Catholicism. According to Hollenberg, it was a "culmination, rather than a radical change," and Hollenberg's biography emphasizes the alternative, circular meaning of revolution for the poet's life. As Levertov explained, "it was not so much a conversion (that had all happened gradually and was to belief in Christianity itself, not to Catholicism in particular) but an act of solidarity with that part of the church that seemed to [her] the most socially active among all the denominations and at the same time has a sacramental and spiritual tradition...[she] can connect with aesthetically and therefore spiritually."

Around the time of Levertov's conversion, her social activism, along with her health, declined. Hollenberg asks of her late poetry, "How far is she here from that earlier [political] self?" She concludes that "The heat of revolutionary fire is gone from her voice, but its intensity and power of illumination is greater than ever." The poem "To Live in the Mercy of God," from her last volume of poetry Sands from the Well, offers a sense of this religious culmination:

To live in the mercy of God.

To feel vibrate the enraptured

waterfall flinging itself
unabating down and down
to clenched fists of rock.
[....]
Thus, not mild, not temperate,
God's love for the world. Vast
flood of mercy
flung on resistance.

Levertov died in 1997. Her papers, including diaries, are at Stanford University, where she also taught for a number of years. If the Hollenberg biography is any indication, these papers would be a great resource for historians interested in writing about religion and social activism, conversion experiences, and Catholic devotion in the late twentieth-century. But what about Levertov's poems? I think her anti-war poems are a crucial example of the role of poetry in social protest, but I am less sure (and this may be my own discomfort) that historians might invoke poetry in the same way we use novels as way to explore particular cultures and values.

As Kate Daniels' review indicates, Levertov's relationship to feminism was complex, but she was influenced by the women's movement, and she maintained lifelong friendships with female and feminist poets. Ultimately, Hollenberg's biography shows that Levertov's political and intellectual interests were elsewhere.

Carol Faulkner said…
After this post, I had a stimulating email exchange with Guy Aiken, a graduate student at the University of Virginia, about the possibility of historians' analyzing poetry to understand different cultures and values. With Guy's permission, I post some of his great questions:

"So the problem isn't the explanatory power of history for poetry, as all language is intrinsically culture-bound, but poetry's explanatory power for history. I'm just musing here, as I said, but what if the enigmatic nature of poetry is itself the key to its explanatory power? One could start with Bushnell's dissertation on religious language, compare it with common sense realism's premise that reality is directly apprehensible, and then trace the divergences among evangelical liberalism, modernism, and fundamentalism by way of their differing, even conflicting, attitudes toward, and uses of, poetry, both within and outside the Bible.

"And how does poetry nurture or hinder Americans' devotional lives? One could imagine an Orsi-type treatment of this. How has poetry facilitated the growth of spirituality without religion? Can we imagine a huge chunk of the population being (or considering themselves to be) spiritual but not religious, were it not for the spirituality found outside the church in poetry as well as in social justice and in nature? Maybe we can. How has poetry facilitated or even catalyzed the conversion of American Jews and Christians to Buddhism, Hinduism, and Islam?

"Or one could look at the role of poetry, especially Wordsworth and Whitman (see Worshiping Walt), in catalyzing the liberalization or even secularization and naturalization of the religion of people like Dewey and Fosdick and others. My own sympathies in this direction might blind me to the evangelical power of poetry like Levertov's or Merton's to convert the unconverted, or make the converted more devout, or sustain more orthodox faith through doubts and trials."

Trevor Burrows said…
Thanks so much for this post, Carol, and for the additional questions from Guy. I had no idea Levertov's religious biography was so complex; really wonderful stuff.
March 24, 2014 at 5:14 AM