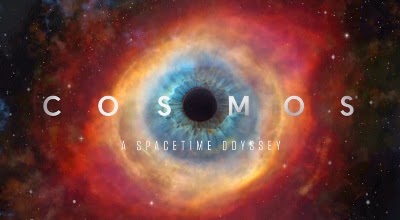 The all-knowing Internet was able to help me with the first question right away. Giordano Bruno (1548-1600) was one of several early modern thinkers who combined what we'd now call theology, science, math, literature, and magic into a speculative body of work that eventually got him killed by religious authorities. His abrasive personality and the myriad tensions of 16th-century Europe didn't help. A fantastic exchange on a Discover magazine blog has since filled in my sketchy knowledge of Bruno and his contributions.

What struck me about the portrayal of science versus religion was the twist on the familiar scientific martyrology. Many cliches were repeated, as the lone truth-seeker chafed against limits on academic freedom and was ultimately slain merely for teaching ideas that were ahead of his time. (The Discover blog deconstructs these cliches as well.) But the money line was cartoon-Bruno's plea to his examiners, "Your God is too small!" I took this as an argument that religion, rightly understood, is not threatened by, nor does it pose a threat to, scientific inquiry. Of course, it's more than a little presumptuous for a popular science show to define the right understanding of religion, but the argument is basically what I was taught as an undergrad at Wheaton College, and a far cry from the sneering hostility of Andrew Dickson White or Inherit the Wind.

Still, why go there at all?

As with most questions regarding motives, this one lies beyond the scope of inquiry. We historians instead raise questions of context: How might this text, and its reception, shed light on a historical moment?

The original Cosmos series aired on PBS in 1980, a rather different moment than 2014. Conservative Protestantism was resurgent in America, as Ronald Reagan gained the White House. But the year also saw the release of A Secular Humanist Declaration by the Counsel for Democratic and Secular Humanism. Carl Sagan's line "The cosmos is all that ever is or ever was or ever will be" served as a rallying cry for opponents of evangelical creationism. "'Cosmos' series criticized for its philosophical view," read a headline in Christianity Today. There were some nuanced discussion as well, but us-verses-them rhetoric abounded on both sides.

Last month's debate between Bill Nye and Ken Ham illustrates the distance we haven't traveled since 1980. But the varied and vibrant responses to the new Cosmos highlight some new developments. Sure, there's plenty of grumbling from religious conservatives and crowing from their enemies. Meanwhile, Religion News Service has a nice piece on the popularity of Sagan, and Cosmos, with many "nones" and organized nontheists. Writer Kimberly Winston notes, "Sunday Assembly, a growing movement of nonbelievers, has begun weekly meetings with [Sagan's] quotes. Some nonbelieving parents have named their children after him." (Where, exactly, is the line between non-religion and a new religion?) And a TV review of the broadcast on The Wire focused on the question, "What does Neil deGrasse Tyson's Cosmos Say About Religion?" "I'm hoping, and I think the show's writers are hoping, that viewers will understand the Bruno story not as a condemnation of religion, but as a redrawing of the boundaries between faith and science," mused one of the reviewers, just before a roundup of tweets about the show.

Thanks to Cosmos, then, there's a flurry of interest in 16th century church history and in discussion of the porous and shifting boundary between religion and science, two subjects that usually don't grab much attention outside ASCH and AAR. And thanks to the Internet, many people can participate in these multifaceted inquiries, rather than hearing only the loudest voices of the culture wars. I'll count that as progress.
Email Post
Labels: elesha's posts religion and science television

Unknown said…
The centerpiece of the first Cosmos episode was a timeline for the universe and for evolution on earth. This timeline is being fought in school districts across our country as "young Earth creationists" continue to insist that creation in 4004 BC be taught as a valid option. Better to face anticipated backlash head on than wait to be denounced or even banned.
March 19, 2014 at 5:43 AM

Kevin M. Schultz said…
Good stuff Elesha. And although I haven't named any of my sons or daughters "Carl" or "Neil," I have been "religiously" watching the show with my partner and our various offspring. On the one hand, Cosmos is avowedly pro-evolution, incorporating humankind into the tree of life (the theme of Episode 2), attacking the famous argument that often emerges from "intelligent designers" about the "perfection" of the human eye (about 10 minutes worth of coverage on how it evolved from our underwater ancestors), and then the amazing timeline thing, which constituted the last 5 minutes of episode 1 and which was truly stunning, knocks the 4004 BCE people into left field. It's not shy about its stance on these things. On the other hand, as both you and the first commenter acknowledge, they don't deny God(s) at all. They just want to open more space for Him. Your quotation from cartooned Bruno is right on the money about the show's ambitions, and I find it fascinating that de Grasse Tyson uses an old 1980 recording of Sagan saying the line about "all that there is and all that there ever will be" instead of saying it himself. Tyson keeps his hands clean on that one... Progress? At least it opens up a third way.
March 21, 2014 at 1:07 PM

Rogers Family said…
But what is really interesting to me about the use of Bruno is the apparent non-ironic use. Bruno is no scientist like a Galileo (who is usually trotted out in these types of conversations). At least the episode does not depict him as such (I admit I haven't researched Bruno). He is instead, apparently, a mystic who had a dream about the universe. Imagine if such a figure came barging into the faculty lounge at a university. He would be laughed out of the place. If he were a professor seeking tenure in a physics or astronomy position he would be denied. And rightly so. Why not contrast religion of a certain age with a scientist of a certain age--not a mystic. And I realize the line was far blurrier back then. Still, struck me as very odd.
April 2, 2014 at 3:26 PM