A History of Religion in 5 ½ Objects: Bringing the Spiritual to Its Senses: A Pedagogical Meditation 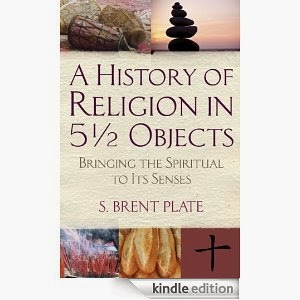 When I requested a copy of S. Brent Plate’s forthcoming A History of Religion in 5½ Objects: Bringing the Spiritual to Its Senses from Beacon Press, I envisioned writing, and indeed promised to write, a traditional book review. As I read, however, I was irresistibly drawn to thinking about the text in my own current classroom context. At the moment, I am charged with teaching a course that serves as both an introduction to religious studies and to multiple world traditions. My students, the vast majority from Christian backgrounds, find it almost impossible to think about religion outside of the context of belief. Indeed, as I take them on a whirlwind tour of method and content, it is hard to pause and dig deeply enough into any one context so they can think about and consider how it is that a ritual, for instance, might have import beyond the explicit meanings given it by believers or scholars.

A History of Religion in 5½ Objects, available on March 11th, would provide a useful intervention for my belief-oriented students. Plate draws his title from Plato’s Symposium, which suggests that humans are incomplete and that the experience of love is falling in love with one’s “other half” in order to become complete.  Plate accepts this idea of the incomplete human but suggests that a connection to the sacred, not the love of another human, makes a person whole. Rather than locating that knowledge of the sacred in belief, Plate finds in materially, sensually rooted experience. In his text, then, he traces the role of five objects: stones, incense, drums, crosses, and bread, in the human search for a materially grounded spirituality.


In each chapter, Plate explores the role of the given object across a range of traditions. Stones are the stones of the Western Wall, the Ka’ba, the Stone of the Anointing in the Church of the Holy Sepulchre, and the deliberately placed stones of Japanese tea gardens. Stones function in the sacred stories as metaphor, such as the linguistic play with Peter (Petros) as the rock (petra) of Christ’s church, and as geography, as with the stone on which Abraham prepared to sacrifice Isaac. They are ancient, like Turkey’s Gobekli Tepe, and modern, like a rock sculpture garden at the Detroit airport. We understand their purposes, when priests bless the foundation stones of churches, and we puzzle about how to interpret them, as is the case with ancient piles of stones found in many locations. Throughout this catalog of stones, Plate argues “Rocks become stones when humans interact with them and use them in cultural settings.” Stones, he suggests anchor people, mark sacred spaces, or travel with people as reminders of sacred locales. They serve as weapons and talismans. They are all grounding. He proceeds to make similar interpretations with incense, drums, and crosses; and in my pedagogical imagination, the chapters on incense and drums particularly would take my students away from their drive for meaning and into an experience of religion—incense, at its root, may be about sacrifice, but it is also deeply sensual and experiential, and Plate is careful to ground his examples in the senses.

Also useful as a teaching tool is Plate’s excellent and very clear use of a range of major figures in religious studies, from classic voices like Emile Durkheim and Max Muller, to contemporary theorists like Sherry Ornter, and to leading scholars like Diana Eck. Each time he does, he gives students a window into the role of theory and scholarship in interpretation. He also creates the opportunity for a teacher to interweave the work of these varied scholars with 5½ Objects to create a syllabus that introduces students to major figures in the historiography of religious studies and its contemporary configurations.

Similarly, Plate brings in many religious figures, ranging from the Buddha to Charles Finney to Ganesh. He draws from literary giants including James Baldwin, Louise Erdrich, and Annie Dillard, mentions artists as diverse as Salvador Dali, Isamu Noguchi, and Corita Kent. His analysis would easily lend itself to multimedia-based pedagogies, as his fundamental claim that the senses are central would practically demand bringing recordings of drumming and experiences of incense into the classroom, alongside the art and literature that he evokes. The work also would lend itself to digital humanities–based projects in which students use digital platforms to present objects across cultural contexts, interpreting them in light of Plate’s work.

My primary concern with 5½ Objects as a teaching tool comes from a fear that the undergraduate reader will fail to pick up on Plate’s subtle references to cultural difference. While Plate points to the occasional difference in how an object is experienced across traditions, he tends towards pointing out similarities. As he makes arguments about the meaning of stones, incense, drums, and even crosses, he pulls his examples from many cultures. He makes lists that might cause the careless reader to conflate Heaven, Paradise, and the Pure Land or to forget that different religions treat their sacred stones in notably different ways. As Plate traces objects through a vast array of cultures, geographies, and time periods, I worry that students will read him as claiming that the object, be it stone or incense, cross or drum, always functions the same way across human experience.

Plate himself is aware of this danger, and his chapter on bread explains that it is nowhere near as universal as the other objects. While he points to cultures where rice takes on a similar role to that of bread in the West, bread itself does not have the same cultural prominence everywhere in the world. He points out that as Christianity, in particular, spread to places where bread and wheat are not prevalent, time-honored metaphors around “the bread of life” or wheat as the “staff of life” broke down. (210) Exploring bread, however, allows Plate to issue “a warning of sorts, that actually none of these five objects should be discussed as being a universal aspect to religions and cultures.” (178) The chapter on bread, is the final chapter, and as a teacher, I suspect that by the time my students reach his caution, they will have already come to see the objects in universal terms and will not accommodate this new knowledge. For that reason, were I to adopt the text, I would probably open with the chapter on bread, rather than close with it.

In A Religious History in 5½ Objects: Bringing the Spiritual to Its Senses, I found an engaging, yet complex exploration of religion that takes materiality, rather than belief as its starting point. It makes a compelling case for the role of the senses in religious experience and is written in a manner that is, I believe, well suited to the undergraduate classroom. It is accessible enough to draw students in, yet approaches its subject rigorously enough to open the door to broader and deeper scholarly conversations.
Email Post
Labels: material culture material religion reviews Samira's posts