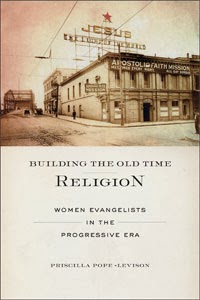 While preparing for an introductory lecture on American evangelicalism years ago, Priscilla Pope-Levison was struck by the lack of information on women. In her search to include women in the lesson she came across Iva Durham Vennard, a late-nineteenth- and early-twentieth-century Methodist deaconess, evangelist, and educator. Discovering shared affinities -- both were "Methodist from birth, participants in egalitarian marriages...mothers, teachers, [and] fierce advocates for women in ministry" --  Pope-Levison was intrigued. And disappointed. "Why had no one ever introduced me to Vennard in my Methodist confirmation class or Methodist college or Methodist seminary?" she recalled thinking (p. 173).

That thought led Pope-Levison (Professor of Theology and Assistant Director of Women's Studies at Seattle Pacific University) down a path of research that resulted in Turn the Pulpit Loose: Two Centuries of American Women Evangelists (Palgrave Macmillan, 2004) and a website dedicated to "an exhibition of women evangelists and their impact on American religious life from the nation’s infancy to the present." It also led to Pope-Levison's latest book, Building the Old Time Religion: Women Evangelists in the Progressive Era, released in December with NYU Press.

"Building" is central to Pope-Levison's thesis. With Vennard as her jumping off point, Pope-Levison uses a series of thematically-organized overlapping microbiographies to argue that Progressive Era women evangelists from New Jersey to Oregon helped to transform evangelism "from an itinerant practice into the grand task of institution building" (p. 4). This stands in contrast to the wandering preachers in the early-nineteenth-century, the "strangers and pilgrims" written of by Catherine Brekus. The twenty-four women included in Pope-Levison's narrative evangelized by creating rescue homes and missions (Chapter 4), religious training schools (Chapter 3), entirely new denominations (Chapter 2), and evangelistic organizations (Chapter 1). Although most of the institutions they built remained relatively small or did not last, they "pioneered women's religious leadership in American Christianity" (p. 181) and passed on their legacy to Aimee Semple McPherson, whose institution-building in the 1920s "had deep roots in the work of women evangelists who preceded her" (p. 177).

Pope-Levison views Building the Old Time Religion as a move beyond simply recovering overlooked stories and forgotten lives. She argues for "a revision of American Christianity in the Progressive Era based upon an aggregate of women evangelists across the country...who settled down, more or less, to build and lead institutions," (p. 174). Their "collective yet unchoreographed decision to build institutions to foster the primary expression of American Christianity -- evangelism -- marked a seismic shift" as "[e]vangelism found expression in brick and mortar....not in preaching and altar calls alone" (p. 174).

Of course, there are different ways to revise historical understanding. Pope-Levison's method is more in line with books like Rebecca Larson's Daughters of Light (a fascinating book full of details about Quaker female itinerant preachers in the eighteenth century) than, say, Susan Juster's Disorderly Women (a book that uses gender analysis to argue for a new understanding of evangelicalism and politics in late-colonial and early-national America).

Most of the women featured in the book (22 out of 24) come from the ranks of the holiness movement. Pope-Levison also includes a Presbyterian and, surprisingly, a Catholic. In a book full of riveting women, Catholic Martha Moore Avery is perhaps the most interesting story. A former socialist, Avery converted to Catholicism and became involved with an anti-Socialist club in New England. She also co-founded a lay evangelistic organization called the Catholic Truth Guild, touring New England (and beyond) in the 1910s and 1920s in the Catholic Truth Guild Gospel Car. One of Avery's favorite tactics was the Quiz Period, in which the audience asked on-the-spot questions related to any aspect of Catholic teaching. Verbal sparring often ensued, a challenge that Avery apparently took to with relish (p. 34-35).

After Avery's entertaining entrance in the first chapter, holiness movement women of all varieties and persuasions dominate the rest of the book. Scholars of the postbellum holiness movements and early Pentecostalism have probably come across many (but not all) of the names here: Maria Woodworth-Etter, Florence Crawford, Mary Lee Cagle, Alma White, Mary Lena Lews Tate. Yet Pope-Levison's approach is unique because she is not as concerned with tracing the genealogy of the holiness movement (or specific holiness movement denominations). That is not to say Pope-Levison ignores the holiness movement. In the introduction she takes the time to outline its various permutations, from Wesleyan/Holiness to Keswick to Pentecostalism. But by focusing critical attention on the biographical details of the women, the ins-and-outs of institutional building, and the social context in which the women lived, Pope-Levison provides a broad historical vantage point that extends beyond the holiness movement world. In so doing she brings her women into conversation with broader contemporaneous developments.

Although there were other women religious leaders in the Progressive Era, every historian must draw the subject line somewhere. For Pope-Levison, leaders in the WCTU, faith homes, and social settlement houses were out because they were not primarily evangelistic; evangelists like Maggie Newton Van Cott or Hannah Whitall Smith were out because they did not build institutions; Mary Baker Eddy, Emma Curtis Hopkins, and Ellen White were out because they were not part of "mainstream Christianity" (p. 17). There were times that I wish Pope-Levison would have included some of the above (or someone like Caroline Bartlett Crane) more fully in the narrative. And the notion that all the holiness women included by Pope-Levison were part of Progressive Era "mainstream Christianity" is debatable. But that was not her project, and she does clearly explain her decision-making process.

If I haven't made it clear by now, I really enjoyed this book. It is well organized, well written, and full of interesting details - a sign, no doubt, of many hours of research. It is also relatively short, which makes it a fine book to consider when teaching a course that covers Christianity in the Progressive Era. Scholars of American Christianity, the Progressive Era, the holiness movements, and American women's history (religious or otherwise) would all benefit from Pope-Levison's work in Building the Old Time Religion.
Email Post
Labels: evangelicalism new books putz religion in the gilded age religion in the progressive era reviews women's history

Monica L. Mercado said…
Paul, this is great - Martha Moore Avery was one hell of a speaker at the 1909 Catholic Summer School of America. It's also interesting Pope-Levison draws the line at religious settlements for not being primarily evangelistic--Progressive Era Catholics certainly thought that was their purpose!

Paul Putz said…
First, thanks to your comment I just realized that I flipped around Avery's middle and last name in the post! (just corrected that). I'd be interested to hear your thoughts on the book, especially how persuasive you find her reasoning regarding settlements. She mostly discussed Protestant-led settlements, if I remember correctly.
February 19, 2014 at 9:48 PM

Unknown said…
Thanks so much for your comment about settlement work. I do mention tangentially several settlements founded by women evangelists, like Wayside Settlement in Chicago, which was a mission outpost of Iva Durham Vennard's religious training school, Chicago Evangelistic Institute. However, as Paul rightly notes, I endeavored to keep the book's focus on the institution building of women evangelists, and these women did not view settlements as a primary means of their evangelistic work.
February 26, 2014 at 10:22 PM