Ethnography and the African Hebrew Israelites of Jerusalem

2013 was a pretty good years in books for scholars interested in black Jews or black Israelites. Jacob Dorman's Chosen People: The Rise of American Black Israelite Religions, Tudor Parfitt's Black Jews in Africa and the Americas, and John L. Jackson, Jr.'s Thin Description: Ethnography and the African Hebrew Israelites of Jerusalem were all published, and all three books are good. Fellow blogger Lincoln reviewed Chosen People a while back. Today I encourage you to pick up a copy of Jackson's Thin Description for three main reasons: it encourages us to rethink ethnography and religion, it presents a not very well-known group in a very dynamic way, and it pushes the typical categorical boundaries of African American religions. I will keep my thoughts here short, as I'm reviewing it for the Communal Societies journal—a review that has proven to be a difficult task because there is a lot to say about this book. As someone who has researched the Moorish Science Temple, black Catholicism, and is finishing up a dissertation on Afro-creole Spiritualism, I love finding other projects that highlight the vividness and diversity of African American religions. And Thin Description, with its attention to context and politics, clearly demonstrates the significance of this numerically small but richly vibrant community. 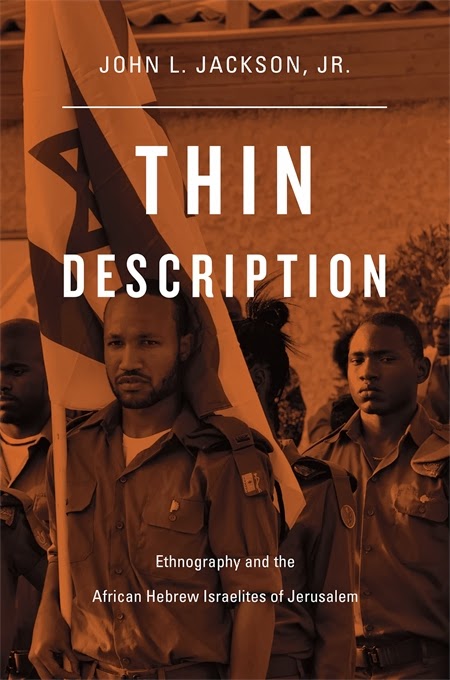 The African Hebrew Israelites of Jerusalem is one of many movements of black Israelites to develop in the United States, but they are unique for their decision to move first to Liberia and then to Israel. The community recognizes themselves as the ancient Hebrew patriarchs' descendants but punished for turning their backs on God’s commandments. This curse will be “permanently rescinded as soon as the descendants of Abraham, Moses, and Jacob repaired their relationship with the Creator” (42). Discussions of the group's apocalyptic thinking, their spiritual geography, their relationships with other black Hebrew groups, how various members came to join the movement, their move across the globe, and their bodily discipline can all be found within Thin Description's pages. The book is fascinating for its exploration of their religion alone. The book becomes even better by its smart reflections on doing ethnography. The result is a thick book of forty-five thin chapters; or as Jackson puts it, "forty-five different ways of telling the same story, forty-five ways of blinking and winking and twitching through decidedly ethnographic eyes, at different speeds with constant backtracking and revisitations" (18).


Many readers have already noted the book's title, a clear departure from Clifford Geertz's "thick description" methodology. Rather than focus solely on describing what members of the "Kingdom" do and believe, Jackson blends discussion about the religion of the African Hebrew Israelites of Jerusalem with observations and analysis on doing ethnography. A while back I was lucky and got to take a graduate seminar on ethnography with Amy Koehlinger during my coursework at Florida State University. We spent a lot of time talking about the practice of ethnography and how its methods have been used in religious studies, specifically projects in American religions. Reading books like James Clifford and George Marcus's Writing Culture: The Poetics and Politics of Ethnography, Michael Jackson's Minima Ethnographica: Intersubjectivity and the Ethnographic Project, Peter Metcalf's They Lie, We Lie: Getting on with Anthropology, and others, we had long, critical discussions about the rewards and limits of ethnography and the ethnographic turn in the study of American religion. One thing became clear: ethnography is hard. And so Jackson's Thin Description was refreshing for its honest and critical look at the ethnographic project itself and writing about it.

Go read it and find out why Jackson has "never stopped doing fieldwork" and think about what that means for studies of lived religion in America. I still am.
Email Post
Labels: Black Israelites Black Jews books emily's posts ethnography new books