Demolishing a Past: Tremont Temple's Struggles in Macon

The following comes to us Doug Thompson, the new Editor of the Journal of Southern Religion. Doug is an Associate Professor in Southern Studies at Mercer University in Macon, Georgia. 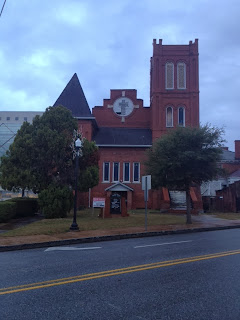 Early in November, news sources released reports about two demolition projects. The first one broke where I reside and involves a zoning request to tear down Tremont Temple Baptist Church, Macon, GA, to make room for a donut shop.  Given the proximity of the Medical Center of Central Georgia, the addition of that kind of business will be a boondoggle for the owner and the city. The second report had far greater reverberations in the national press and comment sections of news outlets. The Atlanta Braves are leaving Turner Field, which was retrofitted for the team following the Summer Olympics in 1996. A day after the Braves leveled their surprise, Atlanta announced plans to demolish Turner Field to create more housing. In one of the reserved parking lots for Turner Field, fans walk across the painted remains of the old Fulton County Stadium. Progress means moving on and leaving behind traces of former glory.

The lesser known, but not necessarily less significant, story in Macon deserves some attention for religious historians. In the reports of the church demolition in Macon, there has been no mention of the church’s attempted move from the location in 1974.  The Tremont Temple’s website explains the long-term effects of that failed move because of a protracted lawsuit brought by five church members. The physical location of the church building on Cotton Ave in downtown Macon allowed Reverend Elisha B. Pascal to situate the church as a “Movement Church.”
Martin Luther King, Jr., spoke from the pulpit to encourage change in the Jim Crow South and raise money for movement causes. When rumblings about how the National Baptist Convention stifled civil rights progress stirred, Pascal led the church to become the seedbed of New Era Baptist State Convention of Georgia and align with the newly formed Progressive National Baptist Convention. In the robust growth of the church and the new economic mobility of its members, and within a decade of those heady moments of the civil right movement, a new pastor, Reverend Alvin H. Hudson, helped the church make plans to move to a suburban location on the southwestern edge of the city. The five members who brought the lawsuit saw the church’s vision squarely located on the Cotton Ave property. Postponed for almost three decades, Tremont Baptist Church moved in 2001. And within a decade of that move, the deteriorated building costs more to fix than demolish.

As Baptists, it appears important to note that the church is the gathered community and not the structures, at 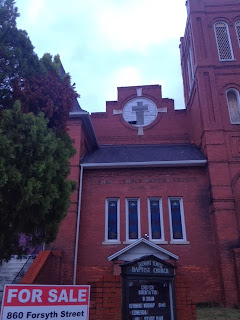 least that is what Baptists tell themselves. Speaking to the P&Z board, Tremont trustee Brenda Cherry asked the board to let the church move on. “The people are the church, not the building. And regardless of whether the building is there or not there, we will always remember what took place at Tremont Temple Baptist Church and our members are in agreement with that,” Cherry said. In this case, however, the building has a “history” that as we move through fiftieth anniversary celebrations of the “movement” causes the economic progress narrative to ring hollow against the great strivings for civil rights. In several ways, the church building is important beyond any of the movement demonstrations because it staked out important space for African Americans in Jim Crow Macon. Buildings ground communities; the physical house helps make the home. We tell ourselves that if the walls could talk we would listen. One of the stories we might hear if we listen is that members of the church had a vision of growth and prospects beyond those walls, and they tried to sell the property then.  When a church reaches the elevated status of a movement church, the narrative arc ties them to that place in time. The majority of members at Tremont Baptist were ready to embrace the possibilities of economic expansion, but a core group of members saw their community’s identity in the building wrought out of many decades of struggle. Had the vision succeeded in 1974 we would likely see a plaque on the site today and the Medical Center would have expanded its footprint, perhaps keeping some pieces of the structure. As a community of believers, the church never gave up the idea that its life existed beyond the walls on Cotton Ave. Their move left the building in a precarious position, and the congregation financially strapped to two sites.

I’ll leave it to the preservationists to figure out how to keep the physical structure even when the purpose of that structure no longer serves its intended function. In some ways, preservationists have an easier time. They need to find ways to keep the structure in tact, often only the façade. Historic Macon’s approach now is to find a way to put the donut shop in the structure, along with several other retail stores. Historians have to read past the physical plant and listen to communities of faith struggle with themselves over things like visions and identity. The Braves are instructive here. Though I, like many others, think this move is stupid, the team has left cities before and had new stadiums built, leaving traces everywhere they have been. The sting of every move was just as palpable in those places as it is in Atlanta, but time creates distance and different memories. Several weeks ago, Macon was reminded that the “historic church” had already left the building and they were already creating distance and building memories. I am struck that there is very little work done on the physical movement of congregations. When it is addressed at all, the narrative approach is to see “flight.” I am willing to concede that where I work on this subject “white” congregations have moved away from changing neighborhoods, but “black” churches have often done the same thing without the stigma of “flight.” Churches serve communities, often neighborhoods, but what happens when those communities move on, congregations are forced to think through their memories and identity. My guess is that if we spent some time in Tremont’s meeting minutes and other documents we would find a congregation struggling to understand itself in a changing context. Their members had already moved beyond the building’s “neighborhood.” Their mission appears to have been unhinged from that physical plant more than five decades ago. What might we learn about churches and religious identity if we paid attention to congregations’ internal debates and decisions about moving their physical presence? What might we learn if we paid attention to those decisions outside the glare of the spectacles that we find in news stories?

Doug Thompson said…
Not sure it's worth another post, so I will comment here. The Macon/Bibb Planning and Zoning committee voted this week 4-1 to deny a demolition request to tear down Tremont Temple Baptist Church's historic structure. The vote only denies the demolition request and the contract remains in force, so the buyer could just let the building fall apart on its own. Historic Macon has made an offer to buy out the current contract and preserve the building, with the plan to find a way to turn the building into a food court. See the story on the P&Z vote at GPB: http://www.gpb.org/news/2013/12/09/no-demolition-permit-for-historic-macon-church

Doug Thompson said…
Not sure it's worth another post, so I will comment here. The Macon/Bibb Planning and Zoning committee voted this week 4-1 to deny a demolition request to tear down Tremont Temple Baptist Church's historic structure. The vote only denies the demolition request but the contract remains in force, so the buyer could just let the building fall apart on its own. Historic Macon has made an offer to buy out the current contract and preserve the building, with the plan to find a way to turn the building into a food court. See the story on the P&Z vote at GPB: http://www.gpb.org/news/2013/12/09/no-demolition-permit-for-historic-macon-church
December 11, 2013 at 11:26 AM